What did Obama see, and when did he see it? 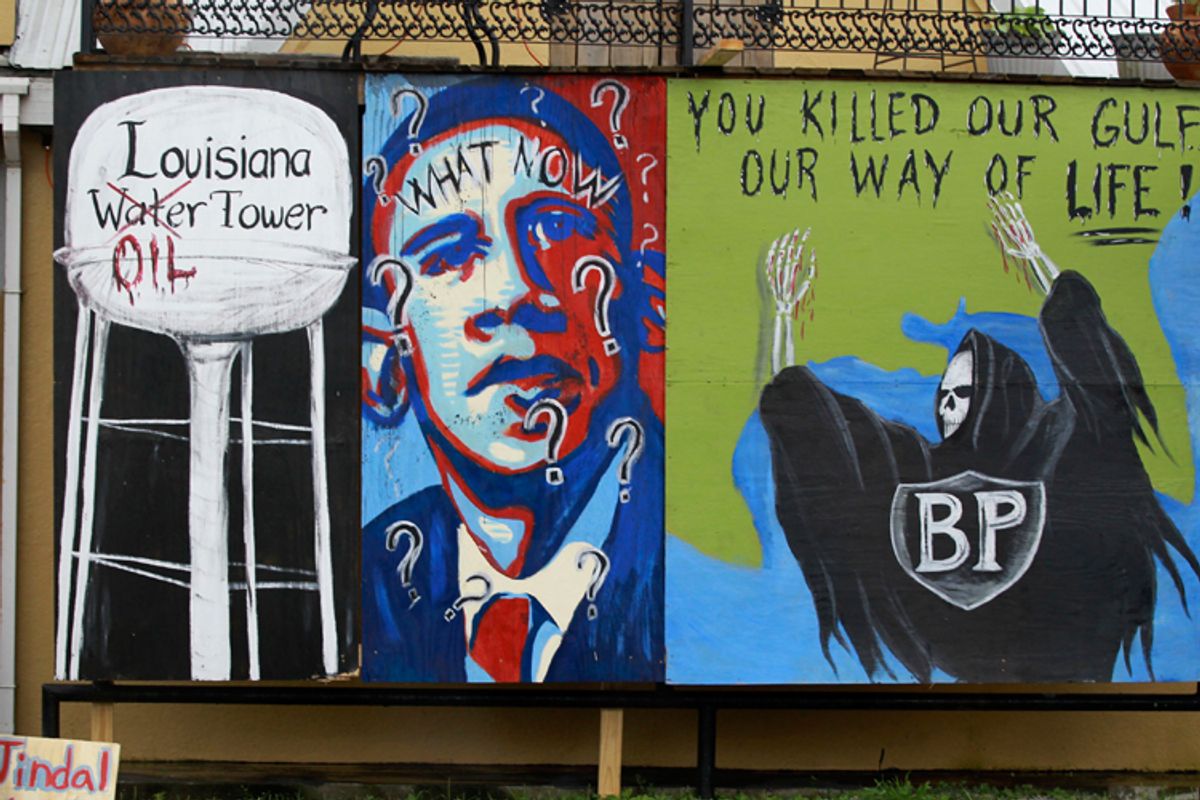 A wall painted with protest messages in Grand Isle, Louisiana.
--

Among the most troubling themes in Tim Dickinson's important new Rolling Stone investigation of the Gulf oil spill is how British Petroleum successfully compromised the federal government, from the obscure Minerals Management Service all the way up to the White House. The failure to respond aggressively and immediately will haunt the Obama presidency for years to come. And early promises of transparency seem to have been broken in this crisis because the administration allowed BP to take control of the narrative -- and especially the video:

From the start, the administration has seemed intent on allowing BP to operate in near-total secrecy. Much of what the public knows about the crisis it owes to Rep. Ed Markey, who chairs the House Subcommittee on Energy and the Environment. Under pressure from Markey, BP was forced to release footage of the gusher, admit that its early estimates put the leak as high as 14,000 barrels a day and post a live feed of its undersea operations on the Internet -- video that administration officials had possessed from the earliest days of the disaster.

That's clearly correct: The "unified command" in New Orleans, including Coast Guard and other federal officials along with BP executives and engineers, has had streaming real-time video of the Deepwater Horizon site available from the earliest hours following the disaster. Adm. Thad Allen, the incident commander, and other members of the unified command team have testified to that fact on several occasions. Testifying before the Senate on May 18, Allen told Sen. Bill Nelson, D-Fla., that "we have had full access to the video footage in our command center since the event started."

That testimony raises additional questions concerning BP's steadfast refusal to release any video footage until more than three weeks after the explosion (and to withhold the vide0 stream from the public for an additional nine days). If U.S. government officials could see that streaming video from the beginning, then why did BP get away with keeping video from the public domain for so long? Or to put it another way: Why didn't the government force BP to release the footage that media outlets and scientists had been requesting for weeks? Only after Sen. Nelson -- with Sen. Barbara Boxer, D-Calif. -- used Allen's testimony to publicly demand release of BP's video footage did the company finally accede a few days later on May 21.

Finally, the Rolling Stone story raises the critical question of what the president saw and when he saw it. At his press conference on May 27, Obama suggested that early estimates of the spill's potential damage were inaccurate because the oil company was not providing all the information it had:

I think it is a legitimate concern to question whether BP’s interest in being fully forthcoming about the extent of the damage is aligned with the public interest. I mean, their interest may be to minimize the damage, and to the extent that they have better information than anybody else, to not be fully forthcoming. So my attitude is we have to verify whatever it is they say about the damage.

This is an area, by the way, where I do think our efforts fell short. And I’m not contradicting my prior point that people were working as hard as they could and doing the best that they could on this front. But I do believe that when the initial estimates came that there were -- it was 5,000 barrels spilling into the ocean per day, that was based on satellite imagery and satellite data that would give a rough calculation. At that point, BP already had a camera down there, but wasn’t fully forthcoming in terms of what did those pictures look like [emphasis added].

Yet according to Obama’s own crisis commander, those pictures in fact were available to the Coast Guard, the MMS and other agencies in the unified command center "since the event started." Did someone neglect to tell the president?