"The A-Team": A cheerful C-minus 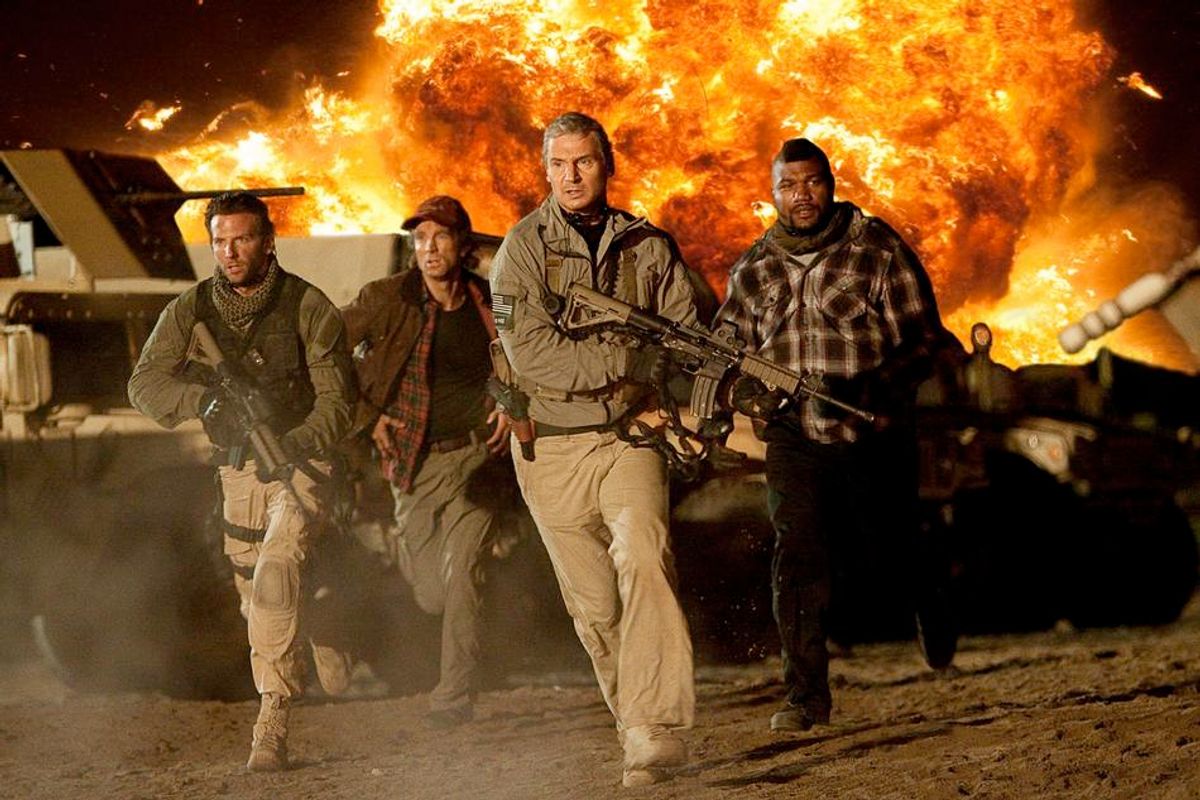 For a movie that reportedly required 11 writers and more than 10 years to complete -- all without any real reason for existing in the first place -- "The A-Team" is reasonably good fun. If you're a 12-year-old boy riding an intense Cherry Pepsi buzz and totally devoted to destroying some brain cells, that is. But then, I can't imagine what other demographic could possibly be intended for this carbo-loading action spectacle, which makes only the vaguest gestures at plot or characterization (or the not-so-lamented '80s TV original) in between its helicopter chases, Frankfurt bank heists, Mexican drug-lord takedowns and other balletic but incoherent production numbers.

OK, I do have two younger colleagues who sheepishly admit that they thought Stephen J. Cannell's NBC series, which starred George Peppard and Mr. T (he of Nancy Reagan fame) and ran from 1983 to 1987, was "cool." They were little kids at the time; I suppose it's forgivable. So there must exist a micro-generation of youngish adults for whom this title exerts a nostalgic pull. Well, you can keep your hoard of Pop Rocks and Ninja Turtles in storage a while longer, because "A-Team" director Joe Carnahan (a Tarantino or Guy Ritchie wannabe who's been kicking around the film world for a generation) and his bevy of writers make no effort to create some clever retro-camp lovefest.

Which is just fine with me; we've seen quite enough resuscitated mid-'80s pop-culture mediocrity, thank you, and the TV "A-Team" didn't even rise to that level. (I'm sorry, Flock of Seagulls and Tears for Fears fans. The time has come to move on.) What Carnahan and company have done instead is attempt to launch a new megabucks action franchise, aimed at younger viewers for whom the original "A-Team" is a misty fragment of cultural prehistory, perhaps referenced by their drunken hipster uncles at Fourth of July barbecues: "I pity the fool who gets between me and my Pabst Blue Ribbon!"

With its grandiose, character-introduction opening credits and its "to be continued"-style ending, "The A-Team" is tempting fate in a big way. Carnahan and his producers try to come off as supremely confident -- dude, you're diggin' us! 'Cause we're a blast! And you know you want more! -- but I watched the film at a nearly empty preview screening and the effect was desperate, like being cornered at a cocktail party by an Amway distributor.

We get approximately the same collection of ex-Army Ranger badasses as in the '80s series, although they've been time-jumped forward to the Iraq era. Despite making virtually no effort to sound like a Yank, Liam Neeson plays cigar-chomping mastermind Hannibal Smith, who comes up with one unnecessarily complicated Rube Goldberg plan after another. Martial artist Quinton "Rampage" Jackson mumbles his way disappointingly through the Mr. T role as van aficionado and ass-kicker B.A. Baracus. Intermittently amusing comic relief comes from Bradley Cooper (of "Hangover" quasi-fame) as the endlessly cheerful "Face," and irresistible South African actor Sharlto Copley (the "District 9" star), who seems to go back and forth between his native accent and rural Tennessee, as psychotic pilot Murdock.

This "A-Team" reminds me of the sub-James Bond action movies I used to enjoy on Saturday afternoons, 30-odd years ago: The "Saint" franchise, or Olympic skier Jean-Claude Killy in "Snow Job" (which I went home and told my parents was the best film I'd ever seen) or Alistair MacLean adaptations like "Puppet on a Chain" or "Force 10 From Navarone." It presents the same utterly bogus version of masculine bonhomie, the same shorthand character development (wisecracks under pressure = toughness), the same ludicrous death-defying stunts, and the same implausible chicks who appear every so often to lend an almost-grown-up veneer and then vanish again, to everyone's obvious relief.

Or rather, "The A-Team" presents all those things turned up to 11.9, injected with crystal meth and steroids, and CGI'd right up the wazoo. I'm pretty sure that "Force 10 From Navarone" would seem to have the pacing, and the philosophical depth, of a Hungarian art-house film if you watched it right after this movie. I don't think there are any shots longer than four seconds in the entire damn thing, except for maybe the opening aerial shot (why do action movies always open with a helicopter shot over some desert or forest or ice?) and the one where Cooper and Jessica Biel, who plays an ultra-tough military officer in a suspiciously clingy uniform, lock lips and all those 12-year-old boys in the audience feel slightly queasy.

Plot? You want plot? Well, sort of. There's a mysterious CIA agent played by Patrick Wilson and a sneering, sinister private-military-contractor guy played by Brian Bloom. There are some missing United States currency engraving plates that once belonged to the Shah of Iran (say what?) and because of all that the A-Team guys have to go to prison and then escape by flying a tank into a lake in Germany. Yes, I said flying a tank, and it's an inspired bit of moronic comic-strip lunacy. That's after they hijack a convoy on the streets of Baghdad, but before they destroy the Los Angeles docklands as part of an elaborate sting operation. (Although, does a plan to blow up every damn thing in sight really qualify as a "sting operation"?)

Carnahan's action sequences have a lot of "kinetic energy," which is a nice way of saying that after the first 15 seconds you have absolutely no idea who is where or which way is up or what the hell is supposed to be happening, beyond the fact that some shit is blowing up and the good guys are kicking some tail. If you can switch your mind off entirely, so you become measurably dumber during the two hours you're sitting there, and you never think about the fact that the gross national product of Equatorial Guinea was spent several times over on this stupid, empty and noisy event, it's largely painless. But then, I do still have a 12-year-old entombed inside me, and, Jesus, is he high on Twizzlers.