Should a teen sail solo around the world? 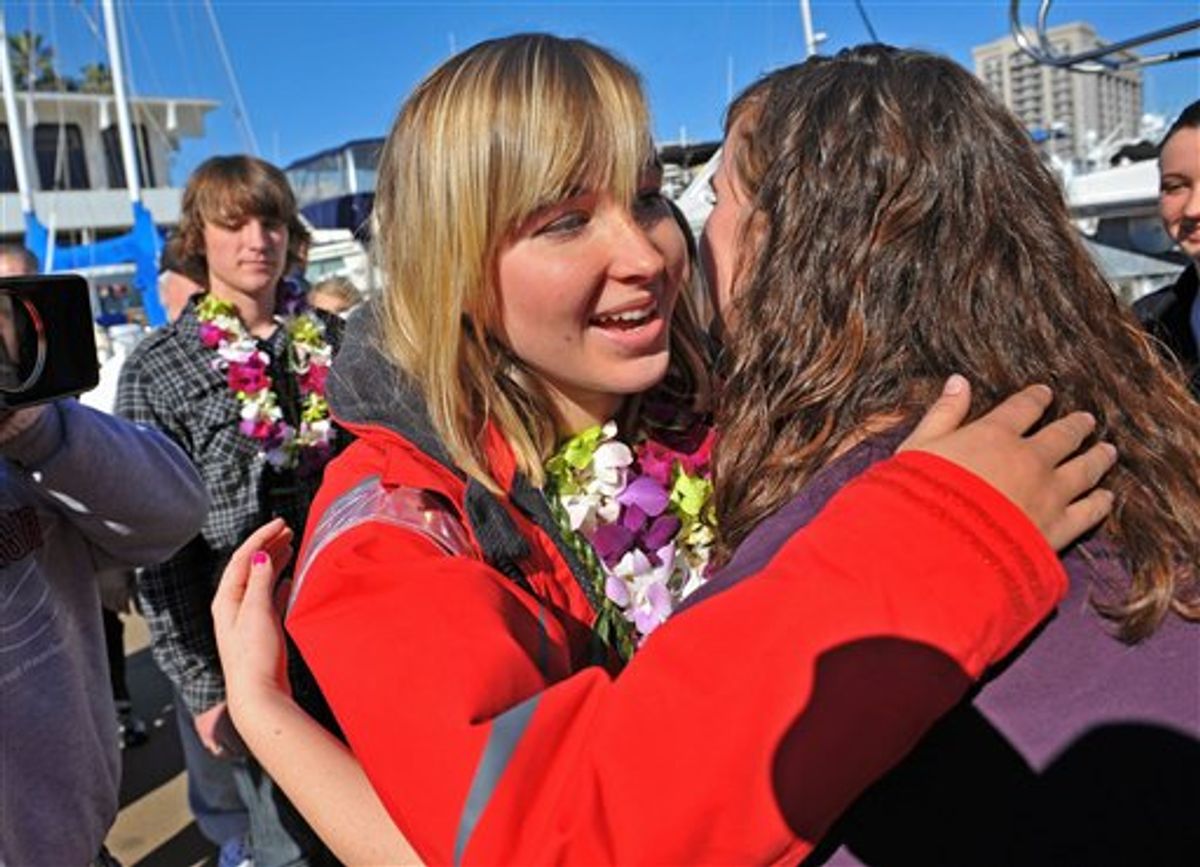 File - In this Jan. 23, 2010 file photo Abby Sunderland, left, 16, gets a hug from friend Casey Nash, right, before leaving for her world record attempting solo journey around the world from the Del Rey Yacht Club in Marina del Rey, Calif. Rescuers searched Thursday, June 10, 2010 for her somewhere between Africa and Australia. The family spokesperson says emergency beacons were activated overnight and there has been a loss of communication. She was feared in trouble in the southern Indian Ocean. (AP Photo/Richard Hartog) (AP)
--

For the perpetual bad rap teens gets as bullying homophobic slut shamers, there are plenty out there full of courage, strength and moxie. Take 16-year-old Abby Sunderland, the Southern California girl who made headlines this week during her quest to become the youngest person to sail solo around the world -- and best a record set by her big brother just one year ago.

Abby is a tough, smart, incredibly articulate young woman, a girl who has had a single dream since she was 13, and whose adventure has captured the attention of the world since she set out in January. But when she sent out a distress signal Thursday and went missing for 20 hours before being found safe in the Indian Ocean, she became something else -- a lightning rod in the debate over youthful aspiration and parental responsibility.

Barb Shelly of the Kansas City Star summed up one side of the coin when she wrote, "It's crazy for a kid her age to be sailing alone, miles from anything, in some of the world's stormiest seas." But her father, Laurence, who helped build her boat, weighed in for the opposition, telling reporters, "She's pretty much been in training for this her whole life. Not everybody should be put into a box, the boxes of society." We haven't seen this much controversy since Lenore Skenazy let her 9-year-old ride the subway alone.

As a mother, I wrestle every day with how far to let my daughters go. I want them to make mistakes and get dinged up and have as much freedom as I can reasonably extend. I don't believe a kid becomes magically endowed with skills or talent or good judgment on her 18th birthday. Despite the fact that her journey will end when rescuers reach her (she's still currently adrift) Abby Sunderland is still undoubtedly a far more qualified sailor than the vast majority of the legally-old-enough-to-sail-solo-around-the-world-if-they-feel-like-it population. And if you want proof that you can be kicking ass and taking names before you're allowed to vote, look at the careers of Taylor Swift or LeBron James or Bill Gates or any other achiever fortunate enough to have a family willing to encourage their passions while they were still school kids.

But there's also an argument to be made – especially in matters of life and death – for considering that having an achievement early doesn't make it better. A few years ago, in a fascinating New Yorker story, Malcolm Gladwell pondered why we so often "equate genius with precocity."  You see it every day, from the moment your fellow parents start bragging that their infant has been rolling over on his own for weeks now. Maybe that's why there's something about the Sunderland siblings' pursuit of breaking records that seems to mitigate what they claim is just a love of sailing.

Nobody likes getting there first and best more than I do – except the two little alpha chicks I managed to spawn. When I was Sunderland's age, I lobbied like a champ until my mother let me go to Paris by myself – but to put it in perspective, I wasn't flying the plane. And I'm grateful that while my own children certainly live to crush it, they have the eye of the tiger in the less dangerous fields of Girl Scout cookie selling and poetry writing.

But I wonder what I'll do when they're in high school and want to trek the Andes or go on a peacekeeping mission to Somalia, or, for that matter, that party in Washington Heights. I don't know. I've only got 18 years to hold their hands and keep them safe. Eighteen years to try to teach them to keep themselves safe. Eighteen years to cheer them on and let them go as they fly farther and farther from the nest. I don't want to restrain them from their dreams. But I do want them to be clear what their dreams really are. I don't condemn Abby Sunderland's parents for helping her pursue her goal -- even if I wouldn't have made the same choice -- but I do question what the girl's goal really was. My kids don't have to peak at 12. Their passions and achievements can and should sustain them a lifetime long. And being the youngest anything isn't the same as being the best.