Both refreshing and rich: The beauty of buttermilk panna cotta

A sophisticated dessert that's delicious, easy to make, and kind of low-fat. Plus: How and why to use gelatin 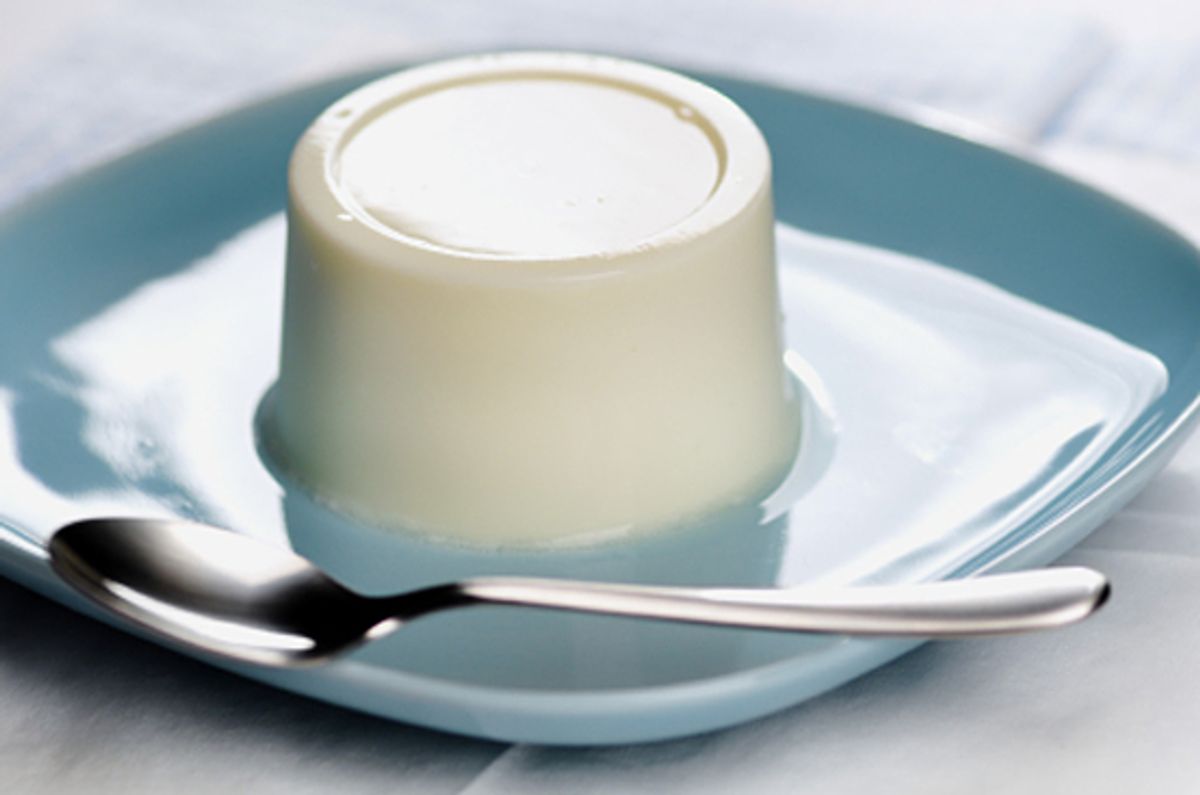 I have barely any training in pastry and even less talent, so during my two years of culinary school I always felt an undertow of worry: Will I finish without knowing how to make even one decent dessert?

Then came the news: I'd be on the pastry station in one of the school's restaurants. Win! But: It's the school's "health conscious" restaurant. Epic fail! I mean, who wants to be able to cook the world's best dinner party and then bring out granola for dessert?

But I became confused when I looked over the recipes I would have to make. "Um, Chef?" I asked. "What, exactly, is low-fat or low-calorie about this chocolate cake?"

Chef looked at me, eyes darting around to make sure we were alone. "We serve a really small slice," he said. Win!

So I learned a lot on that station, and not just on how to cut microscopic portions. I learned, for instance, to never sacrifice flavor or satisfaction for health, whether that means eating just a tiny bit of something you love, or that it's OK to trade the pleasures of fat and sugar as long as you make up for them with something else.

Which brings me to the panna cotta we served. While it's usually translated demurely as "eggless custard," it really means, in Italian, "cooked cream." And that's basically all it is in its traditional form -- heavy cream, sweetened and perhaps flavored, heated just to dissolve some gelatin, and then chilled to set. That's why it's delicious. It's cream. Cream is delicious.

But you can't really rightly put cream in a glass and serve it in a "healthy" restaurant, no matter how small the glass. So we replaced 2/3 of the cream with buttermilk. It's a decent substitution in terms of texture; buttermilk has a nice thickness. But what was really instructive to me was that, rather than shamefully mask the fact that we lost so much richness in the trade, we flavored the panna cotta with citrus to highlight buttermilk's natural tanginess and creating a different kind of satisfaction. What results is a dessert that's both rich and refreshing, perfect for a summer evening.

A note on how and why to use gelatin

A few weeks ago, when writing about my grandmother's coffee banana "pudding," I called the extraordinary pastry chef Shuna Fish Lydon (also of the blog Eggbeater) for some advice. "Pastry chefs," she said, "love gelatin." It's versatile, underappreciated, and does the magical trick of making something cold and jiggly that melts on the tongue, releasing its flavor.

All you have to do is let it sit in liquid for a few minutes to hydrate, warm it up until it dissolves, and then chill it -- how soft, firm or jiggly it gets is entirely up to you, how much you use, and how creative you get. You can lightly gel something for a little bit of thickness. Or you can gel a juice nice and firm, say, and coat a cold plate with it, for a "mirror" of a sauce. Or take that same firm gel and chop it up as a "sauce" that is solid but dissolves immediately in the mouth.

Anyway, she shared some ratios for how much gelatin to use for what kind of texture you're looking for.

Use 3.5 grams of gelatin to 420 grams of liquid for a very, very loose set, almost soupy

Use 3.5 grams gelatin to about 280 grams liquid for a pudding or panna cotta-like texture

Use 3.5 grams gelatin to 70-140 grams liquid for what the French call "Mirroir," and which we call Jello

Pastry chefs measure in weight because it's more precise, but to help you do some converting:

1 teaspoon Knox brand powdered unflavored gelatin weighs about 3.5 grams; one envelope usually weighs 7 grams, but it's best to measure yourself because they have a habit of filling them inconsistently. Shuna says, "It's because Americans usually just set their gelatin really hard, so a few grams doesn't really make a difference to most people. It's not like, 'Oh, I wonder if someone's shoe will get stuck in that?' when it's meant to set like concrete."

Adapted from St. Andrew's Café circa 2003, Culinary Institute of America

The texture of panna cotta is a matter of taste, but to my mind, the very best examples are just barely solid enough to stand up. This recipe makes a firmer version than that, because it's a bit safer if you'd like to serve it unmolded onto a plate. If you like a softer texture, though, feel free to decrease the amount of gelatin in ¼ teaspoon increments.

Either serve directly in the glass or ramekin, or unmold -- slip a thin knife around the edge and invert onto a plate. Alternately, quickly dip the ramekin or glass in hot water for a second and invert to a plate, putting back in the fridge to re-set the edges.

Serve straight-up, with fresh fruit, or with gently cooked berries.