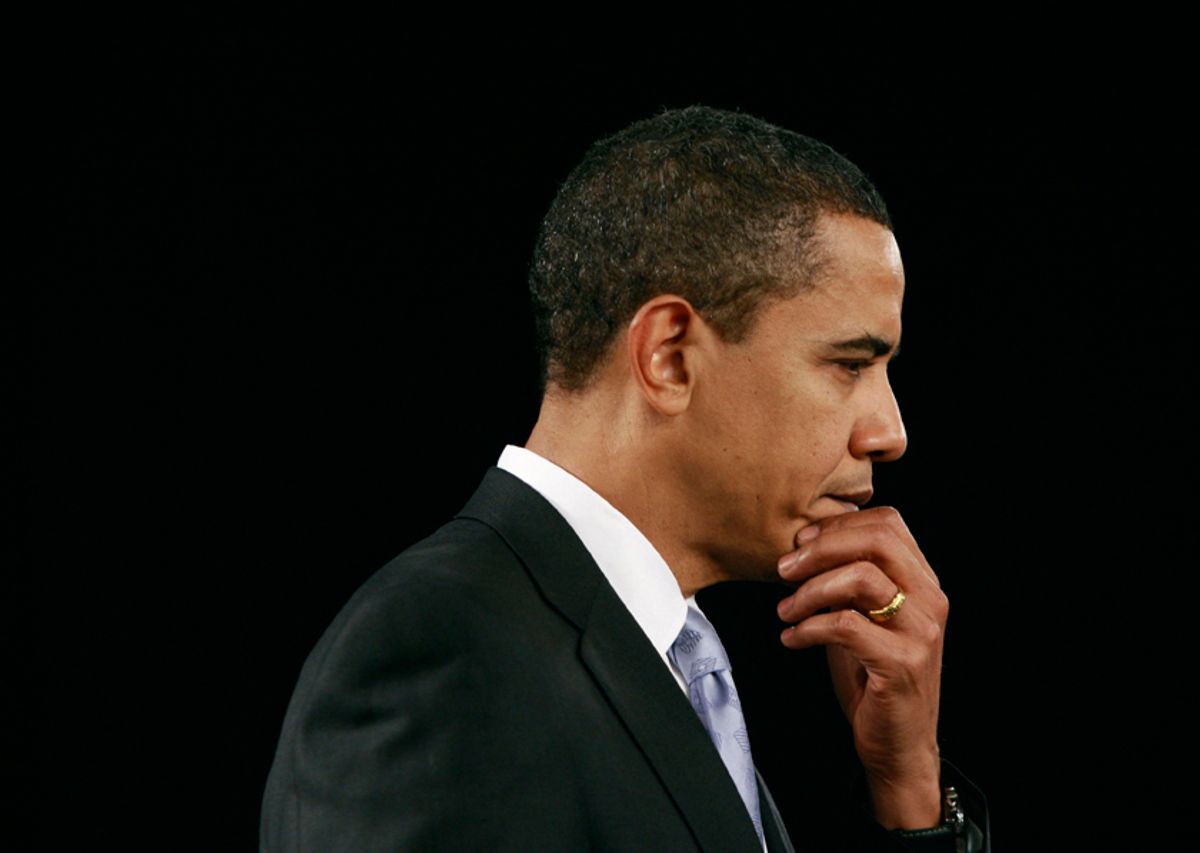 Two stories about President Obama this weekend pushed my growing unease with his recent moves into full-blown anxiety. They come on the heels of Tim Dickinson's devastating Rolling Stone piece laying out concrete problems with Obama's response to the BP oil spill – from delays in cleaning up the Minerals Management Service, distrusting scientists who correctly reported the spill was much bigger than BP said, and waiting more than a week to declare the crisis "an Oil Spill of National Significance," which corralled new services. Maybe the most damning section of Dickinson's piece comes when he quotes the president proudly announcing he'd reversed his stand against offshore oil drilling. "It turns out, by the way, that oil rigs today generally don't cause spills," the president said. "They are technologically very advanced." Dickenson notes: "Eighteen days later, on the eve of the 40th anniversary of Earth Day, the Deepwater Horizon rig went off like a bomb."

Of the weekend's worrisome Obama stories, the first was Politico's Roger Simon's interview with Obama, published in full today, in which his self-defense about how he's handled the BP oil disaster sounded whiny and juvenile, and raised big questions about whether he's capable of fighting the battles he needs to enter and win to move the country forward. The other was Matt Bai's "Democrat in Chief?" in the New York Times Magazine, which showed that Obama and his team seem more focused on protecting the "brand" that they believe galvanized millions of new voters, young voters and independents in 2008, to potentially realign American politics, than with helping Democrats hold the House and Senate.

On that point, quickly: I don't have a problem with the president focusing on the big picture, concentrating on government, to the neglect of partisan political duties. If he were working on programs and policies that he thought would resonate with those new and/or unaligned voters who backed him two years ago, I'd be perfectly fine. What worries me is the White House's relatively substance-free approach to keeping the Obama brand bright and shiny. Bai argues that Obama's team sees "inclusivity, transcendence, a generational break from stale dogmas" as the so-called brand – and there's nothing in that notion that has anything to do with actual political programs, policies or problem solving. That's a little terrifying. Republicans succeeded for most of the last 40 years because they delivered on many of their promises to their base, especially big business, with tax cuts, deregulation and demagoguery against government. Democrats have stumbled in that period because they haven't done the same. Could Obama ultimately hurt the Democratic Party more than he helped it?

But let me get back to the Roger Simon interview, in which Obama seemed less interested in the Democratic Party than a pity party. On the Gulf crisis, the president depicted himself as almost powerless in the face of opportunistic, even hypocritical Republican criticism (except, significantly, he doesn’t use the term "Republican"):

“I will say that there is a debate that we’ve been having for a long time and we’re going to keep on having in this country about the proper role of government. And I think that this crisis has been a good case study in how some people feel pretty contradictory about that role. Some of the same folks who have been hollering and saying ‘do something’ are the same folks who, just two or three months ago, were suggesting that government needs to stop doing so much. Some of the same people who are saying the president needs to show leadership and solve this problem are some of the same folks who, just a few months ago, were saying, this guy is trying to engineer a takeover of our society through the federal government that is going to restrict our freedoms.

And so -- and this translates into very concrete terms, I think it’s fair to say -- if six months ago, before this spill had happened, I had gone up to Congress and I had said we need to crack down a lot harder on oil companies. And we need to spend more money on technology to respond in case of a catastrophic spill. There are folks up there, who will not be named, who would have said this is classic, big-government over-regulation and wasteful spending.”

I don't know where to start with that cavalcade of complaint. First, it sounds like the president has been spooked by the Tea Partiers and their shrill, silly claims he's a socialist. I'm alarmed that he seems to have internalized their crazy charges that he's been over-zealously expanding government. And is he really claiming that he would have loved to crack down on the oil companies with tougher regulations before the explosion, but he didn't, because he was afraid of what his opponents would say? I honestly don't believe that's true, and I don't know what's worse, that he's dissembling here, or that the excuse he's dissembling with is so lame.

It's also very interesting, having read the Matt Bai piece, that Obama didn't mention Republicans in his tale of woe to Simon. In fact he only talks about "folks up there, who will not be named." Bai reveals that House Speaker Nancy Pelosi and other Democrats are livid that Obama so frequently excoriates Washington generally, and the "folks up there," rather than calling out Republicans specifically for their obstruction. But bipartisanship is a pillar of the Obama brand, and so is the notion that Washington is "broken," and Obama shows no signs of wanting to ditch either – even as he flails about in an oily ocean, waiting for someone to offer the hand of bipartisanship, which looks increasingly unlikely.

Bai isn't terribly judgmental about Obama's putting his own political fortunes ahead of the party's. I am. To be fair, Bai shows how Rahm Emanuel, David Axelrod and others think the two things aren't necessarily at odds: If Obama can keep his approval rating above 50 percent this year, history shows Democrats will do better in the midterm election than if it slips – and the more it slips, the worse Democrats are likely to do.

But even Bai sees a contradiction at the heart of that argument. History may not be an accurate guide to the connection between presidential popularity and party power this year, he notes, because Obama is not strongly identified with the politics or programs of the Democratic Party. And the more he polishes the brand by keeping his distance from the party, the less his popularity might help Democrats in the fall.

In my worst moments, I wonder if what seemed like an unexpected gift to the Democratic Party – this charismatic, unifying, "transcendent" president – could wind up setting the party back, because the pragmatic, content-free, bipartisan Obama appeal has nothing to do with getting done what Democrats need to do. To an extent the folks around Obama are right: Many of us on the left believed Obama's victory was a mandate for the liberal policies he (sometimes quietly) backed on the campaign trail: serious healthcare reform legislation, a climate change bill, tough new financial regulation. But a subsection of Obama voters (no one knows how large) backed the president not because of specific programs, but because he promised a new kind of politics that could break through the gridlock that has paralyzed Washington. The Obama team doesn't know exactly what he has to do to keep those voters in 2010 and 2012, but they seem to believe it doesn't involve pushing tough Democratic legislation or bashing Republicans for their intransigence.

I firmly believed in the Obama campaign's strategy to widen the electorate and bring new voters into the process. After at watching Democrats try to do that for more than 20 years, I was impressed that he succeeded. The theory of change behind that goal seemed to be that as he increases the constituency for Democratic politicians and programs, he'll push Republicans to believe they have to work with him to get things done – or face voter anger at their obstructionism at election time.

Of course, Republicans won't face voter anger from Obama's new cadre of backers if they're never told Republicans are the problem; it's merely Washington that's broken. Likewise, if Obama-brand voters are all about Obama, and require a gauzy appeal to bipartisanship and transcendence, denuded of practical problem solving -- health care reform, climate change, creating jobs, a fair tax structure – what do they really add for Democrats?

In the same way, bipartisanship is only a means to an end; it should never be an end in itself. If Obama was able to move a significant bloc of liberal Repubicans behind his moderate goals on the above issues, to get good things done, fantastic. But right now, Obama can only achieve bipartisanship by capitulating on Democratic values and adopting Republican goals – larding both the stimulus and jobs bills with tax cuts, for instance, or flip-flopping on offshore oil drilling to try to win GOP support for a climate change bill. Even then, Republicans tend to back away from his outstretched hand, and Obama looks like an impotent nincompoop waiting around for cooperation that will never come.

There are two pressing reasons that I find Obama's current stasis so worrisome. One is that we're at a dangerous time, given the world economy, and on the right, Obama's election has worsened a 20-year pattern of Republican obstruction and destruction (and it's got an undercurrent of hate and demonization that can't be denied.) At the same time, Obama has an incredible moment to articulate what Democratic leadership stands for: Improving the lives of ordinary Americans, protecting the country from the unbridled, deregulated dangerous corporate excess, and moving boldly on problems, like climate change, that require boldness and leadership. Between the BP oil disaster and the near-collapse of the world economy thanks to the finance industry – both have in common a corporate arrogance that big risks to make big money were worth taking, no matter the impact on the rest of us – Obama has the perfect context for laying out why government matters, and why Democrats run the government best. Instead he's carping about "folks up there" in Washington and complaining that if he'd tried to regulate the oil industry before the spill, people would have said bad things about him. Grow up, Mr. President.

I've been thinking a lot about the whole idea of transcendence that comes up throughout Bai's piece. I have no idea what it means. Contrast the word with the language, and power, behind the civil rights hymn "We Shall Overcome." It's different from "We Shall Transcend." To "overcome" implied patience and perseverance, but also hard work. Transcendence is more passive, it's got religious connotations, I don't know how you "do" it, you might simply have to "be" it. Obama, apparently, is "transcendent." But I don't know if he will help us overcome.