As the legendary radio host signs off, we ponder the fate of musical goofs in an age of Disney radio and YouTube 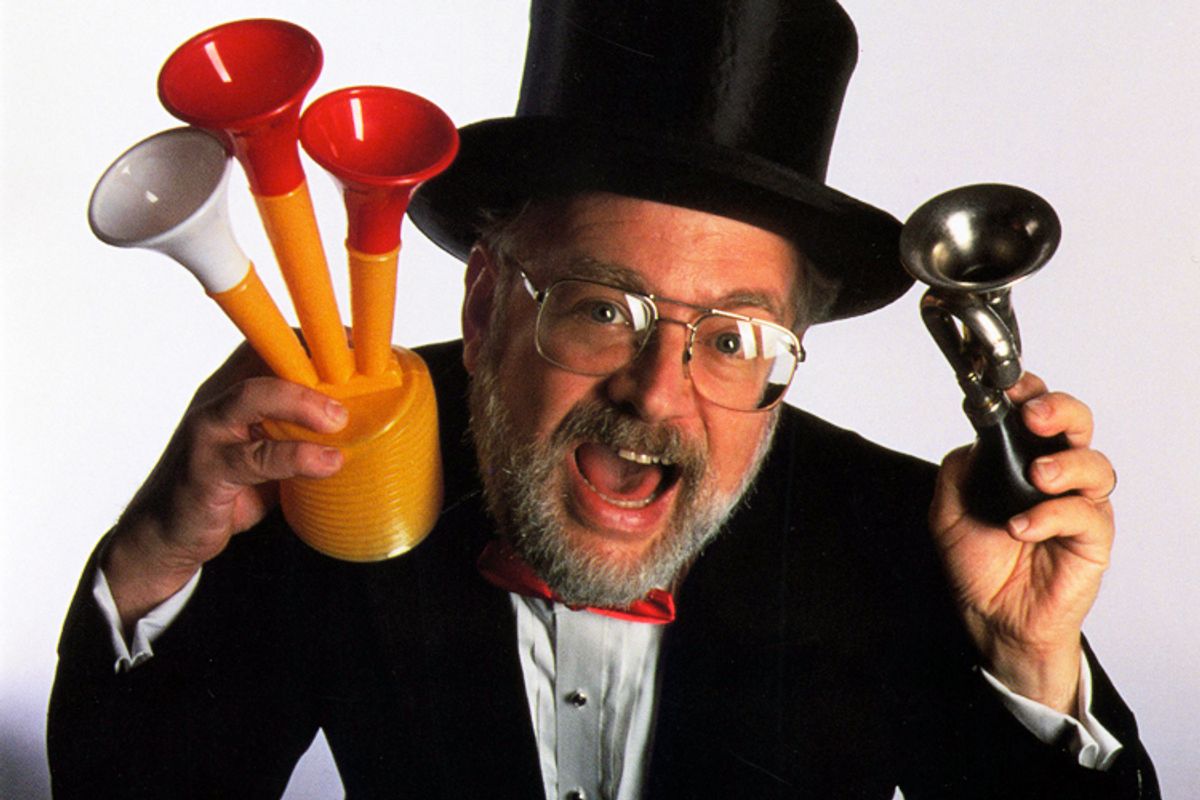 This week, the novelty radio host Dr. Demento announced that, after nearly 40 years on the air, his final broadcast would be this weekend. Even to those with fond memories of listening to Demento's show, the bigger surprise may have been that he was still on the air. In this day and age, the natural place for a two-hour program focusing on "mad music and crazy comedy" would seem to be the Internet, where new shows will be streamed weekly, and the difference between five stations (including one in Alabama and one in Alaska) and none might seem to be a small one. But Demento's partial demise does prompt the question: Whither novelty? Is there a place for novelty songs in the age of YouTube and Radio Disney, or have we seen the last of the once-vibrant genre?

Steven Otfinoski, the author of "The Golden Age of Novelty Songs," dates that golden age from the mid-1950s through the 1960s, when the likes of Sheb Wooley's "The Purple People Eater" and David Seville's "The Witch Doctor" could enjoy steady airplay. (The latter was a pseudonym for Ross Bagdasarian, whose experiments with varying tape speed bore further fruit with the creation of Alvin and the Chipmunks.) "Radio was more democratic back then," he says. "From the '40s through the '50s and into the '60s, there was no niche audience. Everybody listened to the same stuff. Things like novelty songs and instrumentals were all part of a great melting pot of music."

There have been novelty songs as long as there have been records -- longer, even, since the term originates from the days when music was sold by the sheet. But once novelty songs became novelty records, new elements came into play. The clattering classics of 1940s bandleader Spike Jones employ a dizzying barrage of sound effects, like the raspberries shot through the 1942 hit "Der Fuehrer's Face." As rock 'n' roll became the order of the day, songs like the Chips' "Rubber Biscuit" and the Trashmen's "Surfin' Bird" provided gateways for audiences and radio stations wary of embracing the new music.

Beginning in 1970, Dr. Demento (né Barret Hansen) played a similar role. Mixing vintage novelties with discoveries like Barnes & Barnes' sublimely odd "Fish Heads," he mixed musical anthropology and avant-garde experimentation, providing a home on the dial for social outcasts and musical misfits of all kinds. "As a budding nerd, I was always really glad to know that show was out there, even if it wasn't broadcast in an area where I could listen to it," says Stephen Thompson, a music editor at NPR and the founder of the Onion's pop-culture twin, the A.V. Club. Demento encouraged listeners to send in their own songs, with unsurprisingly mixed results. But among them were the nascent stylings of one Alfred "Weird Al" Yankovic, who went on to become the biggest-selling artist in novelty history.

In addition to providing a sense of community to lonely misfits everywhere, the music Demento played was a gateway drug to the avant-garde. It's only as an adult that you realize how genuinely odd Spike Jones' "Cocktails for Two" is, far stranger than anything that would be played on the radio in any other context. "Weird Al made the first record I ever played, and he parodied so many different genres that he made me think about music in a different way," Thompson says.

Since then, the mainstream has gotten stranger. Hip-hop singles regularly employ backing tracks that would furrow Karlheinz Stockhausen's brow, and the annals of YouTube yield real-life oddities beyond anyone's imagination ("Chocolate Rain," anyone?). But radio has been consolidated several times over as well, drastically reducing the chances for idiosyncratic songs to break through on their own. Thompson doubts 1980s hits like Murray Head's "One Night in Bangkok" and Baltimora's "Tarzan Boy" could find a place on the dial now. "I think it's a lot trickier to make a conventionally released novelty record these days," he says.

Kathy O'Connell, who hosts the Peabody-winning "Kid's Corner" on Philadelphia's WXPN, has a prediction. "Weird Al is the icon of every 11-year-old boy in the country," she says. "But where are more 'Fish Heads' going to come from? I believe they're going to come from kids' music."

O'Connell points to kid-focused bands like Trout Fishing in America and They Might Be Giants' children's albums as proof that the weird and wonderful spirit of novelty music will be passed on to the next generation. But she sheds a tear for the passing of Demento's broadcast, fondly recalling seeking out parking lots on Long Island where his radio signal could just barely be pulled in. "Where are future generations going to listen to that?" she asks.

One answer might be to look at Weird Al himself, whose canny exploitation of new media helped yield his first top 10 hit with 2006's Chamillionaire parody "White and Nerdy." "You could go on Twitter and he's got like 2 million followers," Thompson says. "There are 30 million YouTube views on 'White and Nerdy.'" And there's certainly novelty in that.

View a slide show of the best novelty songs of all time, from Spike Jones to Flight of the Conchords.