A call for a new term beyond organic: "Authentic" 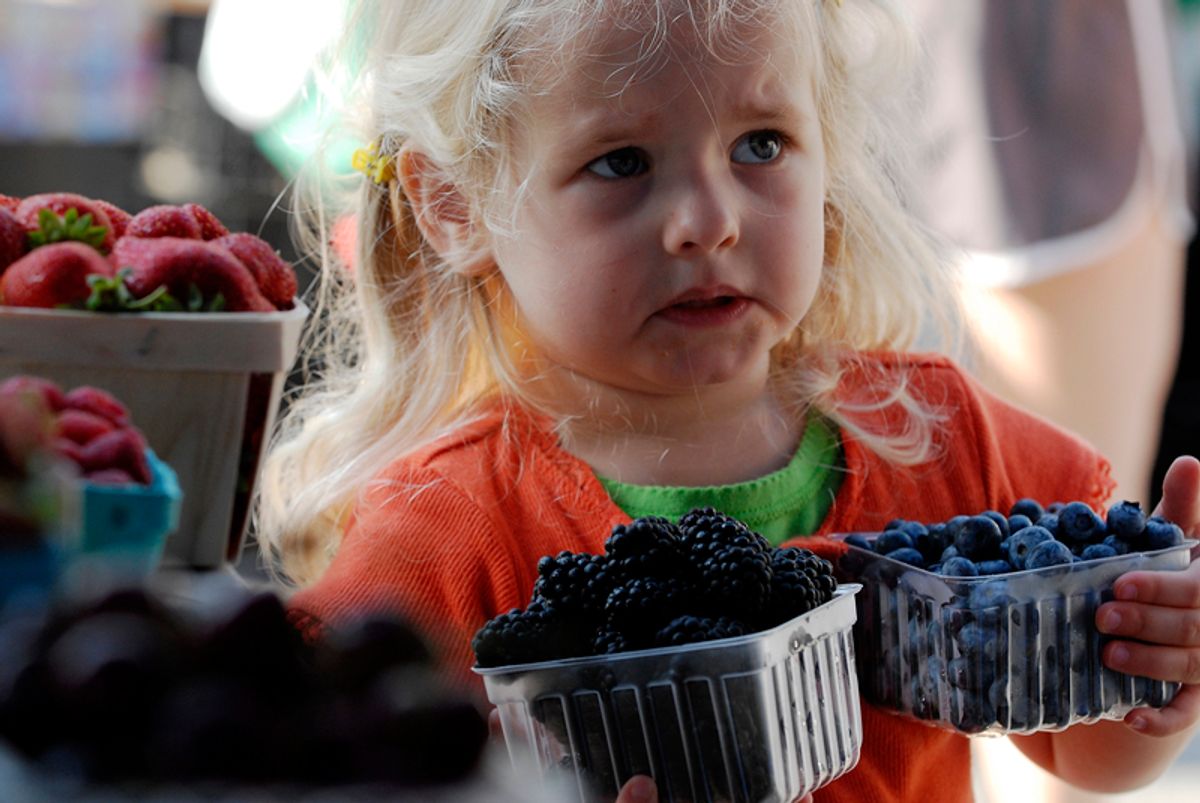 Some things -- asparagus, summer turnips, green beans, peas, lettuce, plums, certain apples -- taste obviously different when they are taken directly from the tree or soil rather than purchased in a supermarket. Yet very few of us know that from harvesting our own plants and trees. The closest we come is buying such produce at a farm stand or farmer's market. The supporters of small-scale growers and farmers' markets, which were once few and cheap and are now so much more plentiful and expensive, are sometimes accused of impracticality and elitism. But there's no reason to deprive anyone of a choice between higher and lower quality. And small-scale producers sometimes show the way for mass-producers, as they did and continue do in the case of organic production.

Idealistic market gardeners came first, but of course large corporations have dominated the U.S. supply of organic food for years. The federal government's much-negotiated definition of "organic," when it came into force in 2002, was strong evidence of the big money to be made. At first, the small-scale growers were worried that it would be hard to compete.

Eliot Coleman, the fine market gardener who lives on the coast of Maine, has no doubt that well-raised organic food is superior to conventional, but after the government defined "organic," he concluded it was "dead as a meaningful synonym for the highest quality food." He cares equally about benign agricultural methods, the healthfulness of food, and the way it tastes, and part of what he found missing from the definition was a concern for freshness and ripeness. Coleman thinks a good grower not only makes such obvious choices as avoiding the use of poisonous chemicals but does a host of small things that are impossible to capture in a set of rules. Those things include choosing the exact kinds and amounts of fertilizer, the amount and timing of water (if any), the particular cultivar of fruit or vegetable, and the timing of harvest. The kind of individual grower Coleman believes in is motivated by the satisfactions of producing high quality and doing good as well as by the desire for profit.

Such market gardeners are sometimes criticized for being expensive boutique growers, for sounding morally superior, and for being unrealistic about how much money, time, and energy most people can afford to devote to shopping for food. (Of course, what it really costs to produce reasonably good food is a lot more than we typically pay for food, if you factor in agricultural subsidies, soil erosion, air and water pollution, the environmental cost of using so much petroleum-based fertilizer, the health problems of those who work in certain farm environments, and more.) Most American farmers, whatever they might prefer to do, now compete to produce as cheaply as possible in order simply to stay in business. How good can food be if the main goal is to reduce the cost of production?

To promote better food, in an article that appeared some years ago in Mother Earth News, Coleman proposed an attractive, romantic new post-"organic" term based on the Greek word authentes -- "one who does things for him or herself." To have an "authentic" label, food would have to be sold directly by the person or family who grew it -- no middleman. (Of course, many farmers don't have the time or desire to do their own retail selling. But if they did, customers could give useful feedback on varieties, ripeness, and taste.) "Fresh fruits and vegetables, milk, eggs, and meat [would be] produced within a 50-mile radius of their place of final sale," Coleman wrote, suggesting possible standards. "The seed and storage crops (grains, beans, nuts, potatoes, etc.) [would be] produced within a 300-mile radius." Only "traditional processed foods" -- cheese, bread, wine -- could claim to be "made with authentic ingredients." Growers wouldn't cease to be organic. But rather than focus on ways to combat pests and diseases, they would focus on creating healthy plants as well as animals, which would be raised on pasture as much as possible. Coleman especially likes the definition of "authentic" as "local, seller-grown, and fresh" because that meaning couldn't be taken over by national and international producers. "Authentic" food would be a worthwhile point of reference. The idea is as timely now as when he first proposed it.

Food Food Business Growers And Producers The Art Of Eating