Suddenly, you can't watch cable news without seeing the Louisiana Democrat talk about the oil spill 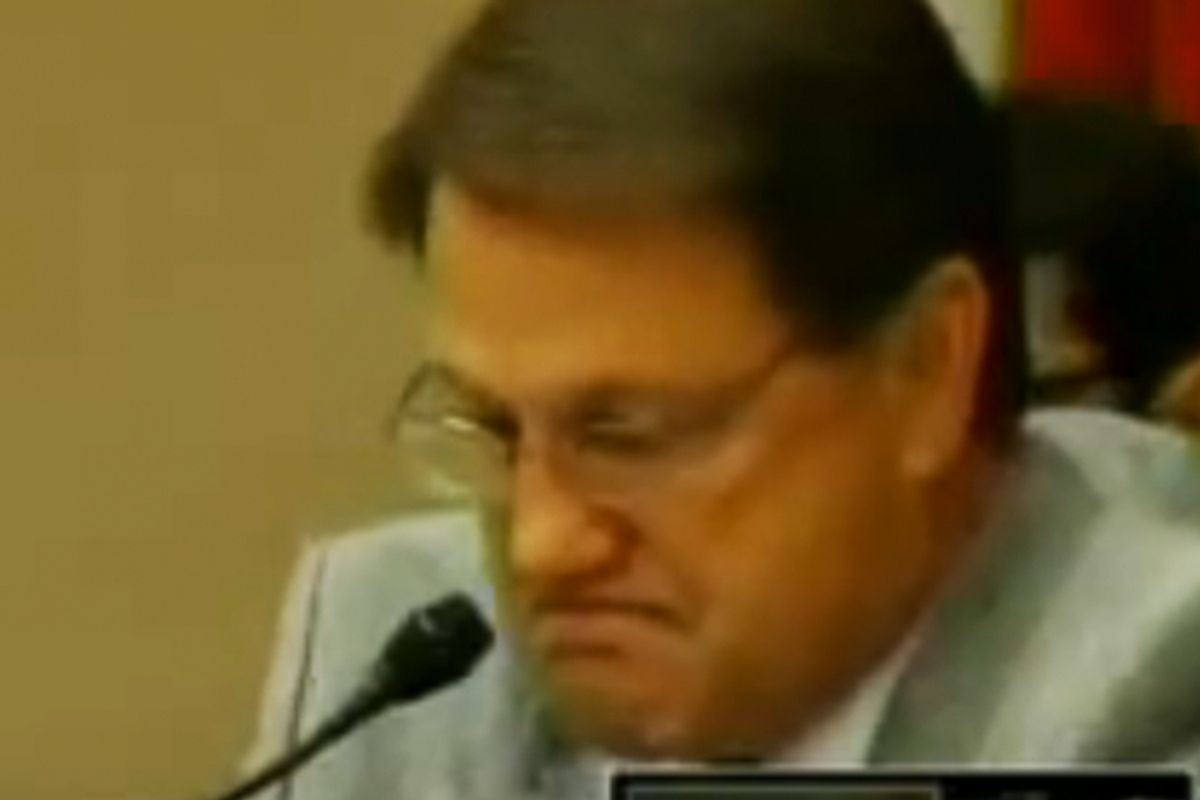 BATON ROUGE, La. -- Coastal residents are getting by on steady diets of caffeine, allergy medicine and paranoia. The seemingly endless tide of crude being pushed in by the Gulf of Mexico and the potential it holds for the ongoing hurricane season are damn near crippling in what is already an uncomfortably hot and humid summer.

Make no mistake: Due to climates both political and environmental, life is hell in south Louisiana right now.

Craig P. Taffaro Jr. says it’s a lot like the aftermath of Hurricane Katrina, only in slow motion. He’s the elected president of St. Bernard Parish, which took on the brunt of the 2005 storm season before it ever reached the New Orleans area. The reality of 30,000 barrels of oil per day is slowly being accepted by locals, he says, which also means they must move on with their lives, like they did after Katrina.

Such decision-making makes for dark times. "The human side is where we had families destroyed, marriages ended, suicide, alcoholism, drug abuse -- these are the unaimed consequences that continue to spike in the face of this disaster," Taffaro says.

St. Bernard Parish is situated on the eastern side of Louisiana’s 3rd Congressional District, a seat occupied by Rep. Charlie Melancon, a Democrat. On the western side, Terrebonne Parish recently saw BP’s escaped oil flow into its estuaries as well. Nearly 80 percent of the local economy depends on energy production and fishing. Then there’s everything in between.

It’s enough to make a man break, which is what happened to Melancon last month during a committee hearing on Capitol Hill. The YouTube video posted by the Associated Press of Melancon sobbing and struggling through his prepared remarks has been viewed nearly 53,000 times.

Politically speaking, Melancon’s timing is impeccable. He’s vacating his House seat after three terms to oppose incumbent Sen. David Vitter, a Republican, later this fall. The first quarter of the year produced a not-so-hotly-contested race, with Vitter outpolling Melancon by as much as 30 very generous points. The senator’s campaign kitty also outweighed his challenger’s at a 2-to-1 clip. Still does.

Democratic strategist James Carville, the Crescent City’s resident Melancon cheerleader, says every election cycle produces "oddities" and the national attention given to Melancon is among those from 2010. "He put a human face on what’s going on. People understood then that he’s rooted here and understands," Carville said in an interview Friday, after Melancon had appeared on Fox, CNN and MSNBC all within the previous day. "It’s like a 48-38 race, really. He’s not that far behind."

Carville is an ace for the Melancon camp and was raising money for the congressman in New Orleans as recently as two weeks ago. Such surrogacy allows Melancon to keep the money flowing in without actually having to do the fundraising legwork, which he is infamously not fond of -- actually to the point of requiring pestering by aides.

As of last week, there were several polls in the field in Louisiana and a couple were expected to be released in coming days. But for now, political types down the bayou are actually wondering why Melancon hasn’t been able to wring more exposure from the oil crisis.

Truth is, Melancon has never been cut out for politics at this level, Democratic operatives argue. Back home in Napoleonville, pop. 680 or so, folks still call the congressman "Charlie Boy" and still remember when he owned a chain of ice cream shops. Sweet is his game -- he probably knows more about sugarcane than any other topic, having served as an advocate and lobbyist for Big Sugar.

Melancon, an otherwise quiet man plucked from the depths of the Cajun heartland, is anything but smooth and polished. He has been blessed to be surrounded by talented strategists and has suffered the double-edged sword of having his career defined by natural and manmade disasters. In literary terms, he’s one part Holden Caulfield and two parts Forrest Gump, with maybe a touch of Don Quixote for good measure; he’s idealistic, in a position he never fathomed and seeking redemption for an entire culture.

Vitter, meanwhile, is an unmistakable pro and the legendary lone wolf of Louisiana politics. When he served in the state House, Vitter would hold press conferences on important issues without telling his colleagues. In the nation’s upper chamber, he’s paired with senior Sen. Mary Landrieu, a New Orleans Democrat, and their spats are stuff of local lore.

But Vitter has absolutely no ties to President Barack Obama, and that seems to suit Louisiana’s electorate this year. Roy Fletcher, a longtime advisor to GOP Sen. John McCain, says any mojo Melancon may have captured last month was stymied recently when Obama approved a drilling moratorium in the Gulf.

Thousands of jobs are on the line, according to the state, overwhelmingly in south Louisiana. "I think whatever traction Charlie may or may not have had got undercut by that moratorium," says Fletcher. "I know [Melancon] is against it and all, but the fact is he’s in the party that enacted the moratorium."

Pat Bergeron of Baton Rouge, a conservative strategist who has helped elect three Louisiana governors, says that Vitter has stayed ahead of the curve so far by running against Obama and that’s not likely to change. "As long as Melancon has Obama around his neck, he’s beat," Bergeron says. "This state isn’t going to change from anti-Obama overnight."

Melancon has heard this drumbeat before. Just a year ago, he was facing one rowdy town hall meeting after another, and it was Obama’s policy ideas that made them so unruly. In one instance, following a meeting in the northern part of his district, a local newspaper actually described the community’s treatment of Melancon as a "beatdown" in its headline.

On the other hand, Louisiana voters have responded to raw emotion in past elections. Just consider the final gubernatorial debate in 2003 between Democrat Kathleen Blanco and Republican Bobby Jindal. The candidates were asked to name a defining moment in their lives and Blanco tearfully recounted how challenging it was to hold together her family and faith following the death of her 19-year-old son. Many still credit that moment for Blanco's victory -- and Katrina for Jindal’s comeuppance four years later.

It’s actually somewhat appropriate that Melancon’s touch of national fame would be caught on camera. Vitter came to prominence of his own in front of the lens in 2007 when he admitted to a "serious sin" after being linked to the so-called D.C. Madam. In what you might expect to be an emotional statement, Vitter appeared devoid of anything real. As his wife visibly struggled at his side to stay composed, the senator effortlessly moved on to list the bills he was pushing on the Hill at the time.

Melancon, for his part, didn’t necessarily have to run against Vitter. He probably had enough juice to pull out another reelection tot he House this year. But 2012 would be a different story. Elliot Stonecipher, a Shreveport demographer and political analyst, says Louisiana is almost guaranteed to lose a congressional seat during the coming redistricting process. "At the end of the day, if you take away all the political intrigue and work with a demographer that does what is supposed to be done, it’s the 3rd Congressional District that goes," Stonecipher says.

Regardless of his reasons for running, Melancon now holds some momentum in the Senate contest, and it’s due largely to that fateful afternoon last month in the House Energy Committee.

Since then, Melancon has told reporters he simply lost his cool due to the posturing of politicians involved in the recovery. But there was also something else going on that day on the Hill: A series of related hearings on the oil crisis were being held. As such, a number of Louisiana natives flew into Washington to take part, many from near or in Melancon’s district, such as an oysterman facing an uncertain future and a Baton Rouge attorney who lost his son on BP’s Horizon Rig.

Melancon greeted them all, and maybe they partly inspired the message he delivered. "Everything I know and love is at risk," Melancon said during the congressional hearing, wiping away a tear. "Even though this marsh lies ..." he tried to continue before pushing away his microphone.

For a full 10 seconds, Melancon audibly huffed and puffed as he rested his head against his right fist. Then the congressman collected himself enough to finish a sentence that has reached beyond places like Terrebonne and St. Bernard and Napoleonville: "... along coastal Louisiana, these are America’s wetlands."

With that, Melancon exited the committee room -- and finally entered the Bayou State’s Senate race.

Jeremy Alford is a freelance journalist in south Louisiana. He contributes regularly to the New York Times and his work has appeared in Campaigns & Elections magazine, the Dallas Morning News and under datelines for the Associated Press. He was on the ground for hurricanes Katrina, Rita, Gustav and Ike, and is currently covering the environmental storm caused by BP in the Gulf of Mexico. Jeremy has also authored profiles for "The Grass-Roots Guide to the Louisiana Legislature" and served as a source for "The Great Deluge," an account of Katrina's aftermath by historian Douglas Brinkley, and “Louisiana Governors: Rulers, Rascals and Reformers,” published by University Press of Mississippi. He resides in Baton Rouge with his wife, Karron, and 3-year-old daughter, Zoe.