With an open, robust data infrastructure, entrepreneurs will take care of the rest 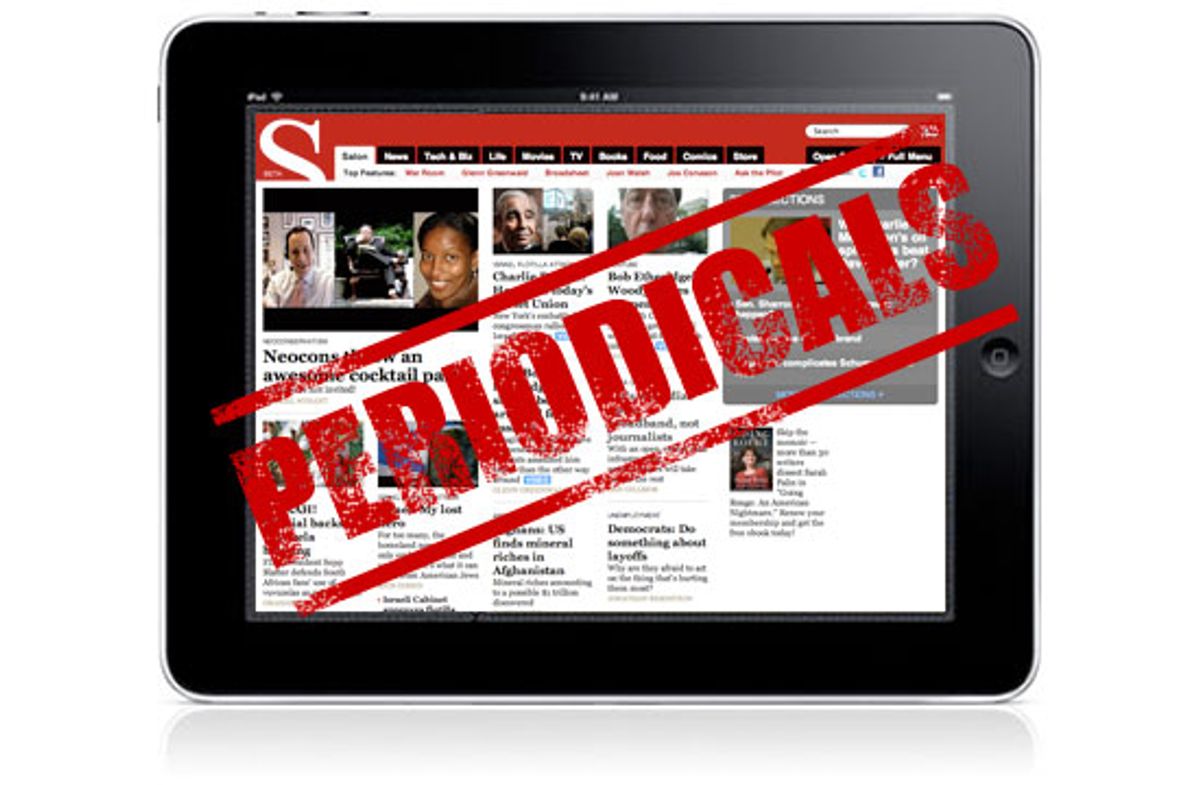 In 1791, James Madison penned a short essay that foretold a long, and ongoing, financial involvement by government in journalism. Madison said, in part:

Whatever facilitates a general intercourse of sentiments, as good roads, domestic commerce, a free press, and particularly a circulation of newspapers through the entire body of the people, and Representatives going from, and returning among every part of them, is equivalent to a contraction of territorial limits, and is favorable to liberty, where these may be too extensive.

The following year, partly in response to Madison's advice, Congress passed the Post Office Act of 1792. One of its key provisions -- in what, looking back, was a pivotal development of a robust and free press in America -- let newspaper publishers mail papers for extremely low prices. It was an outright subsidy, for a social purpose.

The goal wasn't to give newspaper owners a special deal because they were nice people (many were not) or would support government positions (many did not). It was to help ensure that knowledge and commerce would spread as quickly, and as widely, as possible. The First Amendment generally forbade interference in what people could publish; the Post Office law provision helped make it financially feasible to ensure that other people could receive and read what was published.

By all historical accounts, the 1792 law worked. It was central to the rise of the nation as a society based on knowledge.

More than two centuries later, portions of the American journalism business -- newspapers, in particular -- have fallen on hard times that may, in many cases, be terminal. And we're hearing a chorus of calls for a taxpayer bailout of the industry, on the grounds that their journalism plays such a vital role in society that taxpayers should subsidize it directly.

Some of most ardent pleas to that effect have come in front of the Federal Trade Commission, which embarked late last year on a series of workshops/hearings on journalism's future. In the way it's framed the issue -- "How Will Journalism Survive the Internet Age?" -- and the selection of people who've appeared, the FTC has given too much attention to the fearful interventionists, and an insufficient hearing to optimists who'd like to give markets more of a chance. A staff "discussion draft" of earlier workshops has drawn fierce criticism from Jeff Jarvis and others, reasonably in my view, for offering the briefest of nods in the direction of genuine innovation amid much heavy breathing about proposals to comfort dinosaurs.

Count me among the optimists who a) prefer to let markets go further along their disruptive path; but b) do so in the context of government intervention that would promote broader economic and social progress. So when I appear as a panelist tomorrow, I'll offer two related messages:

First, direct subsidies for journalism are the wrong way to go, even dangerous. But we absolutely could use the kind of indirect help -- taxpayer-funded deployment of high-capacity, wide-open broadband networks -- that would be an analogue to the early American postal subsidies, and then some. This would be essential infrastructure, aimed at beefing up all 21st Century commerce and communications, including but not limited to journalism.

Second, if we got serious about broadband in this way, entrepreneurs would almost certainly come up with the journalism, including a variety of business models to augment or replace today's, that would provide the public good we all agree comes with journalism and other trustworthy information.

To be fair, some of the subsidy advocates say they don't want to prop up newspapers per se, though some of their remedies would do just that; others are less shy, and their explicit goal is to save newspapers.

I love newspapers. I worked in them for almost 25 years. But I'm not itching to bail out a business that is failing in large part because it was so transcendentally greedy in its monopoly era that it passed on every opportunity to survive against real financial competition. With a few exceptions, the newspaper industry essentially deserves to die at this point.

The broadband build-out that I and some others advocate would actually reduce government involvement in the journalism business if we did it right. Indeed, government influence, beyond the postal subsidies, has been a common thread in our history.

That's inevitable in some ways. Governments play major roles in the success or failure of all kinds of enterprises. How corporations and not-for-profits do business, and which ones pay which taxes, are decided by lawmakers.

Journalism organizations have enjoyed their share of special treatment. Intervening via the mail, as noted above, was the linchpin. A few decades after the Post Office Act of 1792, Alexis De Tocqueville traveled around the states to research his pathbreaking volumes on Democracy in America. He observed how widely knowledge had spread in a largely rural nation. The essential instrument of this, he explained: "The post, that great instrument of intellectual intercourse, now reaches into the backwoods."

By the mid-1800s, says Bruce Bimber in his book, Information and American Democracy , our postal system became the most dependable and comprehensive in the world. It was an unprecedented exercise in governmental assistance, Bimber argues -- “a kind of Manhattan project of communication” that helped fuel the rise of the first truly mass medium.

The key word in that Bimber quote is "communication." Communications have always helped fuel commerce, learning and a variety of social interactions, well beyond the things we call journalism.

But support for media (and not just what now seems like traditional journalism) has been a long-running reality, not least because news proprietors had plenty to say about who got elected and re-elected. Even in the 20th Century, favorable mail rates helped countless magazines and newsletters stay solvent. Some did a lot better than that; the rise of the Time Inc. magazine empire was aided immeasurably by the fact that it could mail its publications at a cost to the publisher that barely began to cover the actual cost to the system. (In the 21st Century, Time's maneuvering to ensure its own favorable rates, at the expense of publishers of smaller journals, made some economic sense but also had a odiously anticompetitive aspect.)

Newspapers have enjoyed other special federal and local advantages, meanwhile. One of the most flagrant special-interest favors in U.S. history has to be the Newspaper Preservation Act of 1970, in which newspaper publishers persuaded Congress and the Nixon administration to give the industry an exemption from antitrust laws. I spent more than a decade at a company that was helped by this law, so call me, too, a recipient of government largesse.

The gifts aren't just federal. In many states, newspapers get special tax treatment, notably exemption from sales taxes. Last year, for example, the state of Washington cut newspapers' main business taxes by 40 percent (to the same rate enjoyed by Boeing and timber companies, the state's most powerful industries). As the University of Southern California's Geoffrey Cowan and David Westphal observed late last year: " Federal and state governments forego about $890 million a year on income and sales tax breaks to the newspaper industry, most of it at the state level. The actual figure is probably much higher because many states don't report tax expenditure details." Moreover, they wrote, public notice﻿s have been a huge revenue boost over the decades for newspapers, not to mention smaller favors like the placement of newspaper vending machines and boxes on public streets.

Print publications haven't been the only beneficiaries of government favors. The gifts to the newspaper and magazine businesses are dwarfed in recent times by what broadcasters carved away from the taxpayers: namely free use of the public's airwaves. Local TV broadcasters, in particular, took advantage of this windfall, worth hundreds of billions of dollars over the decades, to make money at a rate that made even newspaper shareholders envious. The unenforced "public service" requirement for all broadcasters has led to local TV "news" becoming a cesspool of violence, celebrity gossip and trivia that would have to improve to be mediocre; local newspapers are only now becoming as lousy as local TV news has been through its entire history.

So even though I personally find the direct-subsidy idea abhorrent for all kinds of reasons, I have to recognize that we've done a lot of it in the past. But poor policies don't have to be the rule, do they?

The Federal Trade Commission's most significant mandate is to promote competition. Strictly speaking, we might speculate that the 1792 Post Office Act and monopolization of first-class mail deterred competition from other entities in the postal-delivery market. There was a vital public value in what we did, however, and its outcome reminds us of a more recent federal endeavor with high relevance to our broadband data future: the Interstate highway system.

In the 1950s, America’s state and local highways were relatively well developed. What the nation decided it needed, and what corporate America couldn’t begin to provide, was a robust system of long-distance roads.

With data, the reverse is true: the long-distance data highways, the “backbone” networks, exist in abundance. What we really need now is better local conveyances, the ones running to and into our homes. Big telecom carriers say they’ll provide these connections -- that is, they may provide these connections if they feel like it -- only if we allow them to control the content that flows on those lines.

Imagine if we’d given the interstates to corporations that could decide what kinds of vehicular traffic could use them. If you want to worry about a threat to the journalism of tomorrow, consider the power being collected by the so-called "broadband" providers right now.

If we're going to spend taxpayers' money in ways that could help journalism, let's make that benefit a byproduct of something much more valuable. Let's build out our data networks the right way, by installing fiber everywhere we can possibly put it. Then, let private and public enterprises light it up.

And at that point, we can step back and allow real competition to reign, not the phony facsimile that passes for broadband in American today, a broadband future that the carriers have loudly proclaimed their intention to control at every level. I'm not minimizing the difficulty of making this work; what I'm describing would come with many complications. But this is worth doing, because we simply can't trust our future to the cable-phone duopoly or the relatively weak competition we've seen from wireless providers.

The FTC can't do much on its own about making sure broadband works the right way. That's partly the Federal Communication Commission's job. But it's really the job of Congress, which keeps failing so spectacularly at almost everything else it touches these days.

But the FTC can offer policy recommendations, and sometimes Congress actually listens. So I hope the commission will push for the kind of progress the nation's founders had the wisdom to see. Let's create the conditions that help ensure a market of ideas and business models, based on one of the principle America stood on in its early days: widespread contributions and access to knowledge, as a foundation of the future.


A longtime participant in the tech and media worlds, Dan Gillmor is director of the Knight Center for Digital Media Entrepreneurship at Arizona State University's Walter Cronkite School of Journalism & Mass Communication. Follow Dan on Twitter. More about Dan here﻿.

(This is a revised and updated version of a May, 2009 post on the Mediactive blog.