It'll always be "British Petroleum" to me

Memo to Brits: Quit whining about the name. Americans are incredibly pissed about what BP has done in the Gulf 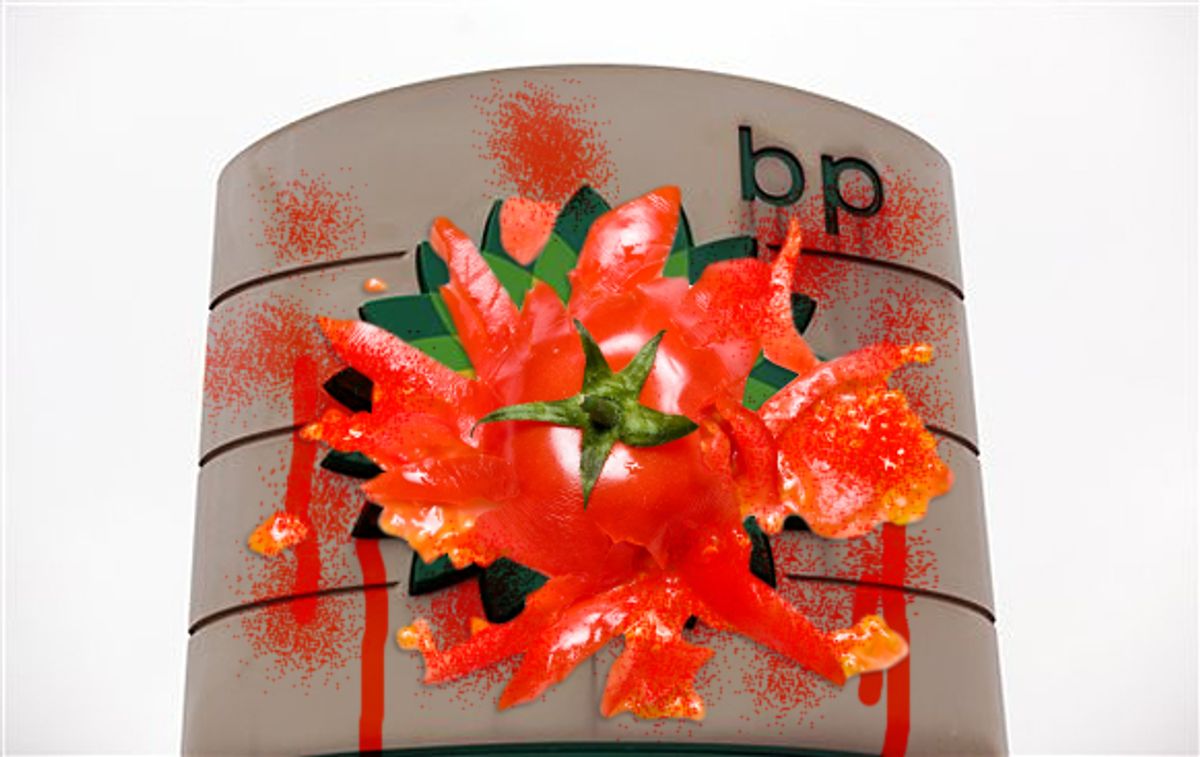 A BP logo is seen at a petrol station in Birmingham, England, Thursday, June 10, 2010. Shares in BP PLC are falling sharply at the start of trading in London after a huge sell-off in New York amid fears about the rising costs facing the company over the Gulf of Mexico oil spill. . (AP Photo/Simon Dawson) (Simon Dawson)
--

The British are now unhappy that Americans are calling BP "British Petroleum." Fraser Nelson, the editor of the Spectator, blogged last week that “BP has not -- for many years -- stood for British Petroleum -- you won’t find the two words anywhere in its annual report.”

Nelson said calling BP by its original name was "anti-British rhetoric." He actually pined for the days of the previous president:

"It’s hard to imagine Bush using the rhetoric that Obama has so quickly resorted to. It does make you wonder: is there still a ‘special relationship’ or is America just not that into us?"

Yeah, Bush did wonders for the special relationship. He really respected you Brits in the morning -- just ask Tony Blair, aka "Bush's lapdog." In fact, President Obama has already phoned the new British prime minister, David Cameron, to make clear that "he had no interest in undermining BP's value." Duh. We need BP solvent since it's not like we're made of money on the polluted side of the pond.

But I thought the Brits were the ones with the long history and stiff upper lip. Now it turns out they have short memories and a glass jaw. Or at least an oily one.

It was not even two years ago that Gordon Brown, then Britain's prime minister, used America as an excuse for British economic problems. On the BBC in November 2008, an interviewer asked Brown "how precarious is the position of the UK economy? Are we on the edge of a precipice?" He replied:

Heck, just read BP Magazine -- yes, it has its own magazine; there's so much we don't know about this misunderstood petro-giant. A 2007 article begins, "With its distinct British heritage, BP is as much a part of the UK landscape as football, tea drinking and the Royal Family."

So are the Brits really saying that calling their veddy, veddy British company "British Petroleum" is somehow an insult, a threat to our "special" relationship? Does that mean we must stop using the word entirely, rewrite our whole history, starting with, say, the Revolutionary War. "The B's are coming. The B's are coming."

Let's remember that BP changed its name from British Petroleum in large part to push the phony rebranding of "Beyond Petroleum." As it turns out, though, they just can't quit oil. It runs through their veins ... and onto our shores.

But here's something I bet even most Brits didn't know, even though it's right there on BP's website:

Despite its name, the British Petroleum brand was originally created by a German firm as a way of marketing its products in Britain. During the war, the British government seized the company’s assets, and the Public Trustee sold them to Anglo-Persian in 1917.

Hmm. Seizing the company's assets. What a novel idea. But I digress. The Anglo-Persian Oil Co. didn't go for the German propaganda name right away. First, as those droll Brits at BP put it: "Persia changed its name to Iran in 1935, and to stay modern the company followed suit. But the good times wouldn’t last much longer."

No, they wouldn't. First there was that whole world war thing. But what led the Anglo-Iranian Oil Co. to rename itself British Petroleum was that 1953 kerfuffle in which the CIA teamed with the Brits to overthrow the Iranian government and install the shah in a coup. Talk about your special relationship!

Ah, but the bromance is gone. Last week, the mayor of London asserted that BP was a victim of "anti-British rhetoric that seems to be permeating from America." Yes, BP is the victim here.

Here's what I have to say to the Brits: We tied your arses in soccer, yes, soccer -- football is a game where people get seriously hurt and tournament games don't end in ties! But it still doesn't make up for what the reckless blokes running your big oil company did to us. Never have so few done so much to so many.

As the fake BP Public Relations twitter site put it:

We never thought of you as whiners until the CEO of your big oil company started saying stuff like "I’d like my life back" and "What the hell did we do to deserve this?" and even "I'm a Brit. Sticks and stones may break my bones but words will never hurt me." Well, let me tell you, we'd greatly prefer sticks and stones to 100 million gallons of oil and a million gallons of toxic dispersants.

So, man up. We're gonna keep calling it British Petroleum. And if you keep complaining, we might start calling it the Anglo-Iranian Oil Co. Let's see what that does for business.