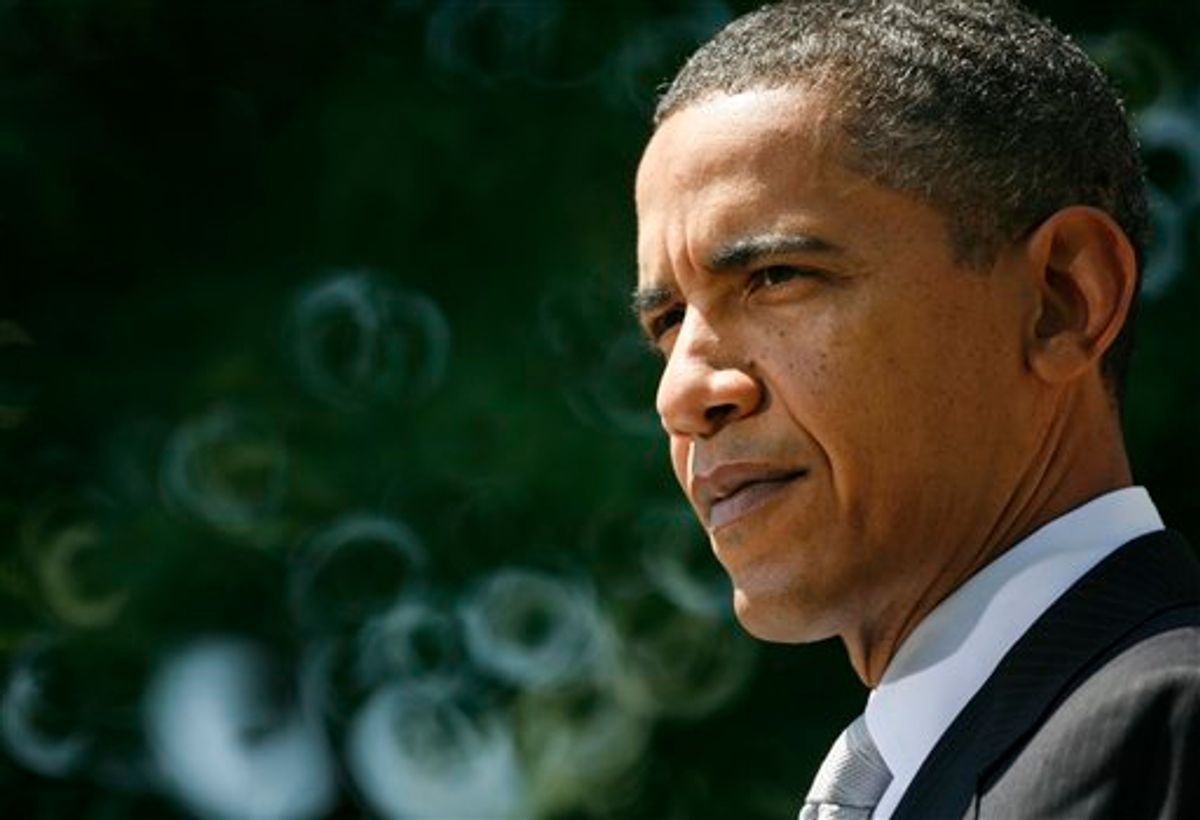 President Obama will give a speech today from the Oval Office on the ongoing disaster in the Gulf of Mexico. According to Atlantic Monthly reporter Marc Ambinder, the president believes the crisis is at an "inflection point." Either he'll convince the public now that he's got some plan going forward, at least to recoup some money from BP and prevent another spill, or he never will. As Ambinder puts it, Obama's speech tonight will be "medium big" in its ambition.

Have you ever heard a better description of the Obama presidency than "medium big"?

The real question is whether Obama will push some scheme for pricing carbon. Although everybody seems to have forgotten about it, the House of Representatives has already passed a cap-and-trade bill in this Congress. The combination of this and the oil spill do seem to present a unique opportunity for the White House to grab hold of public opinion with both hands.

If "Go Big" means a strong push for carbon pricing, then this would be the middle ground -- a speech that focuses on the oil industry, pollution reduction (including renewable standards and CAFE standard enhancement), lots of money for relief and reconstruction, and an assumption of responsibility for the clean-up.

Have we ever known this administration to do much of anything with full force? The urgency of the climate crisis -- both the immediate, localized disaster in the Gulf, and the long-term global catastrophe of climate change -- calls for ambition like no other issue the president faces. And here, most certainly, is an area where he promised ambition during the campaign. In one famous speech (heavily mocked on the right), then-candidate Obama said that his administration would be remembered as "the moment when the rise of the oceans began to slow and our planet began to heal."

The weak party system and presidency that define the American political system mean that it's a given that a candidate won't enact everything promised during the campaign. This is part of why we end up trying to peer into the souls of our politicians: We're trying to guess what they really care about and where they're bullshitting.

So here, with Obama -- florid language  about the planet "healing" aside -- we have a chance to see if he really meant it. If cap-and-trade doesn't pass now, there's no point in the near future when it might really have a shot.  It'll be tough-to-impossible to get it through the Senate as currently configured, and that body doesn’t really get any more progressive than it is right now. And if it doesn't pass in the near future, it'll be too late. In other words, Obama can't play footsie on this one like he has on so many other progressive priorities. On labor reform, the healthcare public option, and even past iterations of the energy debate, the president has intimated that he'd be happy to sign a law if it made it to his desk, but he's shown little appetite for the risks involved in getting it there.

Commentators have lately been making the point that the president is no superman, and particularly on domestic policy, can't just will laws into being. As the healthcare battle showed, it's extremely hard for the White House to push Congress around. Very little leverage over recalcitrant legislators is available to a president who wants to do some bullying.

The only hope for cap-and-trade, then, is for Obama to make his own leverage, by moving public opinion. That's an extraordinarily tall order, but it's all the president can do. The power of the presidency, as political scientist Richard Neustadt famously said, "is the power to persuade." Without a relentless presidential lobbying campaign, there’s no way that Congress will move on meaningful energy reform in an election year. Even with one, it probably won't happen, so the question is if Obama is willing to take a risk, the unlikely payoff of which is enormously worth it. (Even though the cap-and-trade law passed by the House already is itself so weak that many serious environmentalists have opposed it as an unforgivable band-aid measure.)

It's worth remembering that just weeks ago, the White House was preparing to abandon energy policy entirely, in favor of focusing on immigration reform. The issue of climate change was no less pressing than it is now. The president just didn't have the oil spill to use to make his point.

You can call that pragmatism in the face of harsh political reality if you like. That's not a bad description. But the truth is that there was never any point in time when getting cap-and-trade passed was going to be anything but extraordinarily difficult. It still will be now, if Obama tries. A White House that gave up on the issue when it seemed too hard and came haltingly back when it seems marginally easier isn't exactly the picture of idealism Obama painted when he talked about how his presidency would be remembered. At least on this issue, I thought we were getting a big president.