The World Cup conquers all

A tale of vuvuzelas and German efficiency, with a cameo from Henry Kissinger 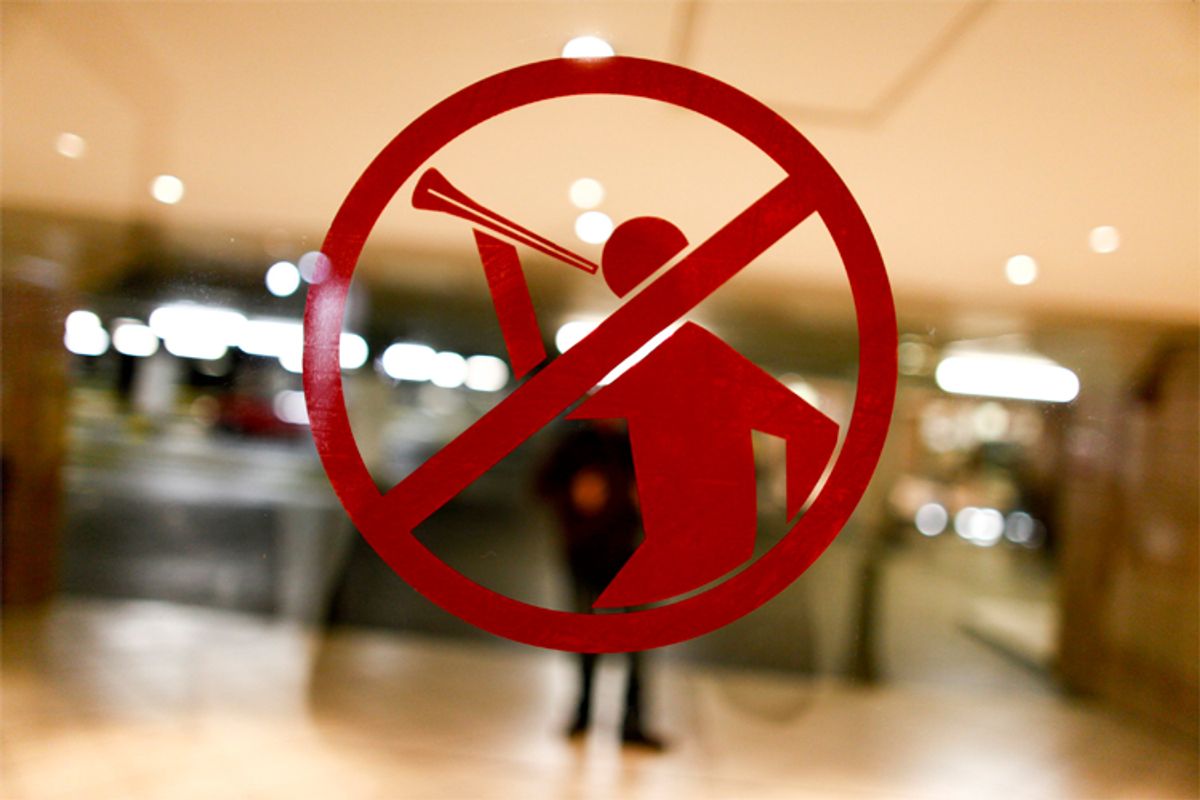 A sticker forbidding the blowing of vuvuzelas is seen on a door of a mall in downtown Bloemfontein, South Africa.
--

Just what the global economy does not need right now: The Wall Street Journal warns that the World Cup brings with it a "a quadrennial month-long productivity drain." Daytime game-watching during business hours is apparently irresistible in soccer-mad nations: "In the U.K., productivity losses tied to the World Cup could total just under $1.45 billion."

But this is not news! Back in 1986, none other than Henry Kissinger observed, in a fascinating essay on national identity and the World Cup, that "it has been estimated that the Brazilian gross national product suffers a loss of hundreds of millions of dollars for every day Brazil plays, as rabid fans sit before television sets or radios."

I don't know whether it is because news organizations are paying acute attention to the potency of the words "world cup" as a search engine optimization magic wand or simply responding to the steadily higher profile of the World Cup in American culture, but as someone who has followed the Cup for 20 years, I feel I can say with some authority that I've never seen such blanket coverage of international soccer in American media. Just the vuvuzela alone -- that droning cheap plastic horn -- is getting the kind of scrutiny that is normally only devoted to once-in-a-century environmental disasters or presidential campaigns. (Today, for example, we learn, also from the Journal, that exposure to stadiums full of vuvuzela tooters could result in permanent hearing loss in as little as 15 minutes.) And if you want to know how the vuvuzela-free North Koreans get their mojo working, the Financial Times is there to tell us about fans who enjoy "banging together two oblong-shaped pieces of wood to produce a sound like loudly clicking chopsticks."

I suppose it's also possible that the maturation of the Internet as a delivery vehicle for content from a much vaster and more variegated array of sources than ever before is contributing to the information overload. In previous World Cups, for example, I imagine it might have been a little more difficult for two economists at Tilburg University, located in the southern region of the Netherlands, to get the word out about their new paper: "They think it's all over: National identity, scoring in the last minute, and penalty shootouts."

Jan van Ours and Martin van Tuijl conduct a close analysis of goals scored in the last five minutes of a World Cup match. They find that such goals have a disproportionate influence on who wins or loses, but that different nations tend, historically, to engage in different end-of-match behavior. In a tie situation, for example, some countries do not want to take the risk of giving up a goal by going all out on offense. Others, notably Germany, are willing to charge forward. In fact, of all the nations analyzed, only Germany was found to be so determined to score at the end that their risk of giving up a goal rose "significantly," leading to the rather chilling observation: "Apparently, Germany wants to win whatever the cost."

National stereotyping during the World Cup! Even more irresistible than sneaking looks at ESPN while pretending to work! But on this count, no one beats Kissinger, whose essay I found in a footnote to the last-minute goal-scoring analysis summary.

Kissinger, born to a Jewish family in Bavaria, has this to say about his fatherland's national soccer tendencies. First comes the praise:

The German national team plays the way its general staff prepared for the war; games are meticulously planned, each player skilled in both attack and defense. Intricate pass patterns evolve, starting right in front of the German goal. Anything achievable by human foresight, careful preparation and hard work is accounted for.

But then, like a cold Russian winter, comes the fatal flaw!

At the same time, the German national team suffers from the same disability as the famous Schlieffen plan for German strategy in World War I. There is a limit to human foresight; psychological stress on those charged with executing excessively complex maneuvers cannot be calculated in advance. If the German team falls behind, or if its intricate approach yields no results, its game is shadowed by the underlying national premonition that in the end even the most dedicated effort will go unrewarded, by the nightmare that ultimately fate is cruel -- a nightmare reinforced by the knowledge that the German media are unmerciful when high expectations go unfulfilled. The impression is unavoidable that an outstanding national soccer team has not brought a proportionate amount of joy to a people that may not in its heart of hearts believe joy is the ultimate national destiny.

The same, needless to say, cannot be said about Brazil.