Americans can feel robber barons making off with the country, but the president failed to tell it like it is 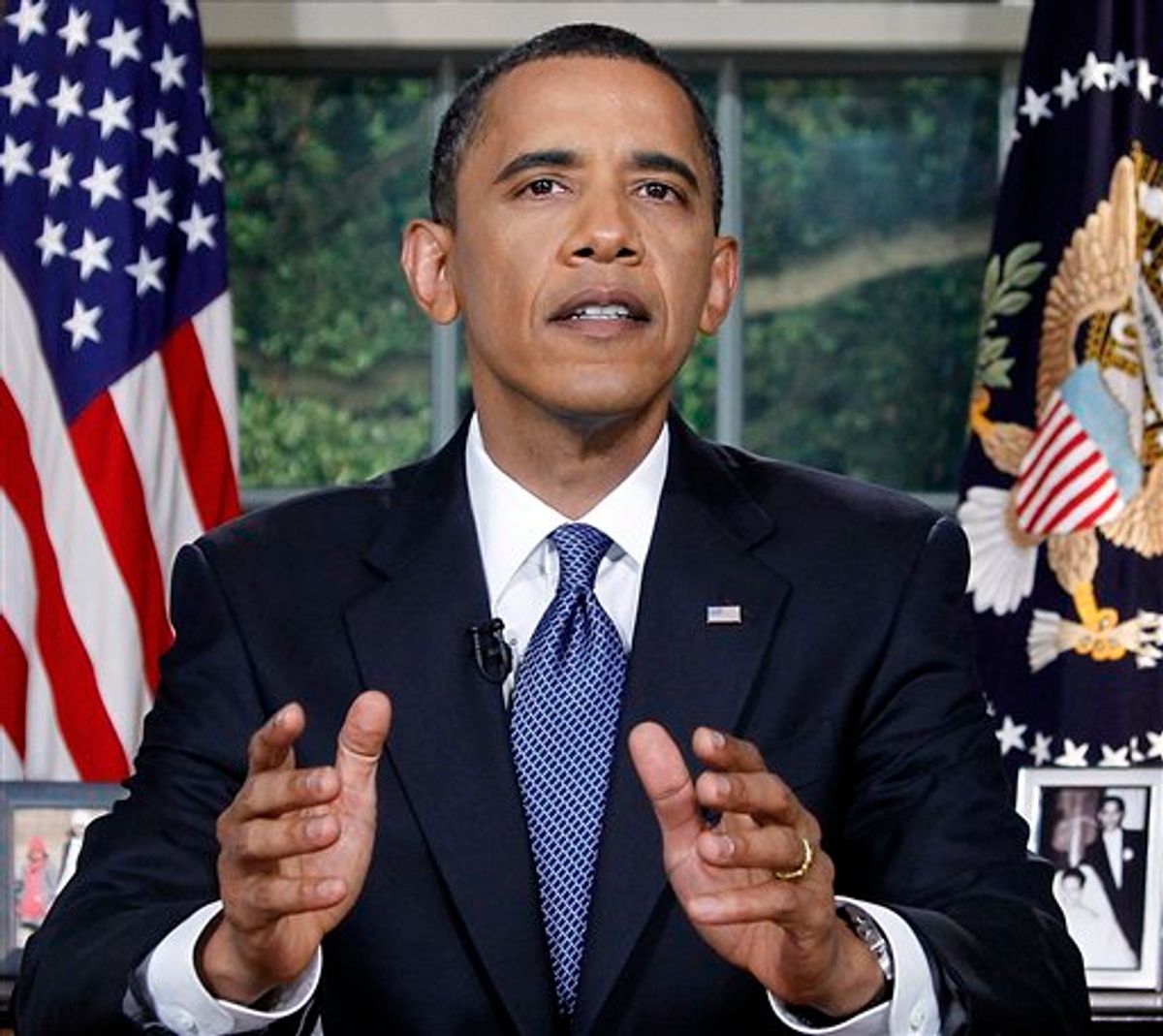 President Barack Obama is photographed after delivering a televised address from the Oval Office of the White House in Washington, Tuesday June 15, 2010. President Obama said the nation will continue to fight the oil spill in the Gulf of Mexico for "as long as it takes." (AP Photo/Alex Brandon) (AP)
--

The man who electrified the nation with his speech at the Democratic National Convention of 2004 put it to sleep tonight. President Obama's address to the nation from the Oval Office was, to be frank, vapid. If you watched with the sound off you might have thought he was giving a lecture on the history of the Interstate Highway System. He didn't have to be angry but he had at least to show passion and conviction. It is, after all, the worst environmental crisis in the history of the nation.

With the sound on, his words hung in the air with all the force of a fundraiser for your local public access TV station. Everything seemed to be in the passive tense. He had authorized deepwater drilling because he "was assured" it was safe. But who assured him? How does he feel about being so brazenly misled? He said he wanted to "understand" why that was mistaken. Understand? He's the president of the United States and it was a major decision. Isn't he determined to find out how his advisors could have been so terribly wrong?

Tomorrow he's "informing" the president of BP of BP's financial obligations. "Informing" is what you do when you phone the newspaper to tell them it wasn't delivered today. Why not "directing" or "ordering?"

The president distinguished what has happened in the Gulf of Mexico from a tornado or hurricane because they are over quickly while the leak is an ongoing crisis, lasting many weeks and perhaps months more. He likened it to an "epidemic." But the real difference has nothing to do with time. Tornadoes and hurricanes are natural disasters. Epidemics occur because germs mutate and spread. The spill occurred because of the recklessness and ruthlessness of a giant oil company in pursuit of profit.

And what has the nation learned from all this? The same lesson we've known for decades, according to the president. We must end our dependence on oil. But if we've known this for decades, why haven’t we done anything about it? The president endorsed the cap-and-trade bill that emerged from the House (without calling it cap-and-trade) but didn’t call for the only thing that may actually work: a tax on carbon.

I'm a fan of Barack Obama. I campaigned for him and I believe in him. I think he has a first-class temperament. I have been deeply moved and startled by his ability to speak about the nation’s most intractable problems. But he failed tonight to rise to the occasion. Is it because he's not getting good advice, or because he's psychologically incapable of expressing the moral outrage the nation feels?

Or is it something deeper? Whether it's Wall Street or health insurers or oil companies, we are approaching a turning point. The top executives of powerful corporations are pursuing profits in ways that menace the nation. We have not seen the likes not since the late nineteenth century when the "robber barons" of finance, oil, and the giant trusts ran roughshod over America. Now, as then, they are using their wealth and influence to buy off legislators and intimidate the regions that depend on them for jobs. Now, as then, they are threatening the safety and security of our people.

This is not to impugn the integrity of all business leaders or to suggest that private enterprise is inherently evil or dangerous. It is merely to state a fact that more and more Americans are beginning to know in their bones.

Our president must tell is like it is -- not with rancor but with the passion and conviction of a leader who recognizes what is happening and rallies the nation behind him.