On climate, Obama is becoming part of the problem

By bowing to political reality in his speech, president just postpones inevitable reckoning 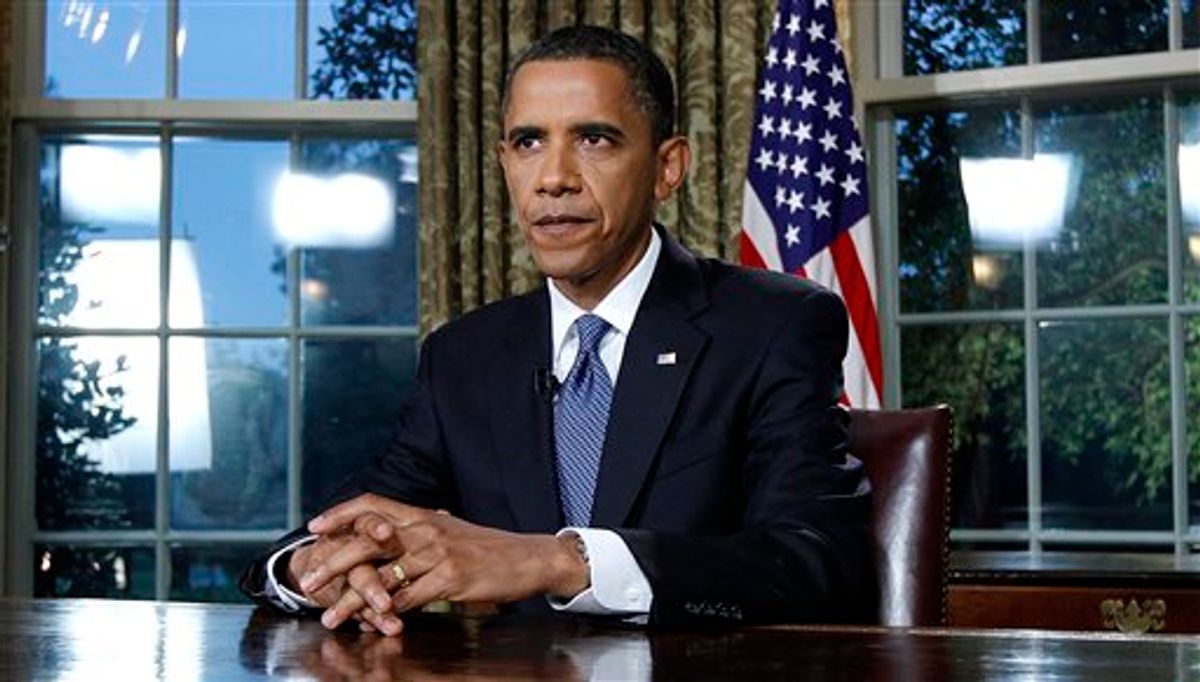 President Barack Obama is photographed after delivering a televised address from the Oval Office of the White House in Washington, Tuesday June 15, 2010. President Obama said the nation will continue to fight the oil spill in the Gulf of Mexico for "as long as it takes." (AP Photo/Alex Brandon) (AP)
--

Sarah Palin went to talk to Bill O'Reilly last night to offer a reaction to the President Obama's speech delivered from the Oval Office. She told the Fox News host, "What [Obama's] top priority is, Bill, is cap and tax. It is using this crisis, not letting it go to waste, but to use this crisis to increase the cost of energy."

While the Gulf of Mexico oil spill that prompted the president's speech is an unprecedented catastrophe, it's nothing compared to what's ahead if we keep pretending that fossil fuels are cheap. Addressing our habits of carbon consumption isn't just the most important possible response to this particular disaster. It's probably the most important issue this president, or any other for the next few decades, will face. Moreover, there's a fairly clear solution that's already been outlined: at the moment, there's an implicit public subsidy for carbon use that enables our reliance, so the government needs to compensate for it by jack up the price of energy somehow. A cap-and-trade system is the preferred method here in much the same way that an insurance mandate was in healthcare reform: it's a politically palatable partial measure, but far better than nothing.

But, as Joan Walsh wrote last night, Obama decided only to offer vague generalities about "increasing the cost of energy," Sarah Palin notwithstanding. Here's the crucial piece:

Last year, the House of Representatives acted on these principles by passing a strong and comprehensive energy and climate bill -- a bill that finally makes clean energy the profitable kind of energy for America's businesses.

Now, there are costs associated with this transition. And some believe we can't afford those costs right now. I say we can't afford not to change how we produce and use energy -- because the long-term costs to our economy, our national security, and our environment are far greater.

So I am happy to look at other ideas and approaches from either party -- as long they seriously tackle our addiction to fossil fuels.

At one point, he talked about the need to "seize the moment." Then he neglected to do so.

So Obama gave a lame speech, failing to lay out the case for the reform that he knows perfectly well to be the only viable one. And now we're left with a choice. Should we gnash our teeth and tear our hair at another disappointment at the hands of this president? Or maybe that would be naïve and foolish, blind to the political and institutional realities that constrict and govern his ability to act. Instead, maybe we should shrug unhappily and concede that he's doing what he can. The man has no power to force Lindsey Graham or Jim Webb to vote how he would like.

This latter view, the pessimistic defense of the president, has an unfortunately strong relationship with the truth. There's no clear path through the Senate for cap-and-trade, even in its current form, watered-down and riddled with corporate giveaways. Saying some favorable things in an Oval Office speech might make us feel better, but it doesn't actually get the bill closer to law.

But that's not to say the president is powerless, or that talking is useless. If this were any other issue, he'd be well-advised to face facts and apply his energy where it can make more of a difference. But it's not any other issue, and Obama owes it to the country to start trying to move some mountains.

If the president decided to take the idea of energy reform to the people, he probably still wouldn't get legislation passed. (Though there is evidence that Americans are much more reasonable -- that is, worried -- about climate change than we generally give them credit for.) If he did pull it off, it would outshine healthcare reform as a watershed accomplishment. But even in failure, there’s something to be gained from speaking clearly and honestly to the public.

Woodrow Wilson was a generally pretty detestable guy (this is one thing Glenn Beck gets sort of right), but there’s something Obama could learn from him. At the end of World War I, Wilson expended massive, futile effort trying to convince Americans that the League of Nations was the world’s only hope for peace and stability. The Republicans who opposed Wilson over the League succeeded, in large part, because a weary country wasn't willing to accept an intellectual president's high-flown scheme to prevent the recent disaster from repeating. It's hard to miss the parallel.

When the feeble League failed and the crisis of the 1930s developed into World War II, it offered a kind of perverse validation to Wilson's effort. By forcefully campaigning for the United States to take a central role in global stability, he had elucidated the choices facing the American people. After World War II, the argument of 1919 reoccurred, but it was won by Wilson's successor, Harry Truman. The reoccurrence of global war had validated Wilson's argument, making it much easier for Truman to sell Americans on the Marshall Plan, NATO, the United Nations and, ultimately, the Cold War itself. By being ambitious and clear, Wilson lost, but his side won out in the long term for the same reason.

The goals of Wilson and Truman weren't particularly noble, but that's not the point. This is: the process of attaining difficult political goals sometimes involves a bitter and futile-seeming first act. It's not that political martyrdom somehow earns the public's trust. It's that the sooner we start talking honestly, the better. This was part of Obama's basic promise as a candidate. Now's the time to live up to it.

So when Obama said, last night, that he's open to all ideas and looks forward to working with both parties, he's not only lying -- the GOP has nothing of substance to offer here -- he's not even achieving a valuable strategic gain by appearing bipartisan and lofty. If progressives are going to win on climate change, then what the public needs to hear is this: we know roughly what kind of action is required to prevent climate disaster. We can choose to do it or not. But in the likely event that we choose not to, we'll be having this argument again pretty soon, after things have gotten worse.

Even if Obama were to make the case now and seem to fail, he'd make it harder for the next guy to fudge it. Of course, it's understandable that the president wouldn't want to stake his popularity and legacy on what looks like a losing issue. But that's just how it looks for now.