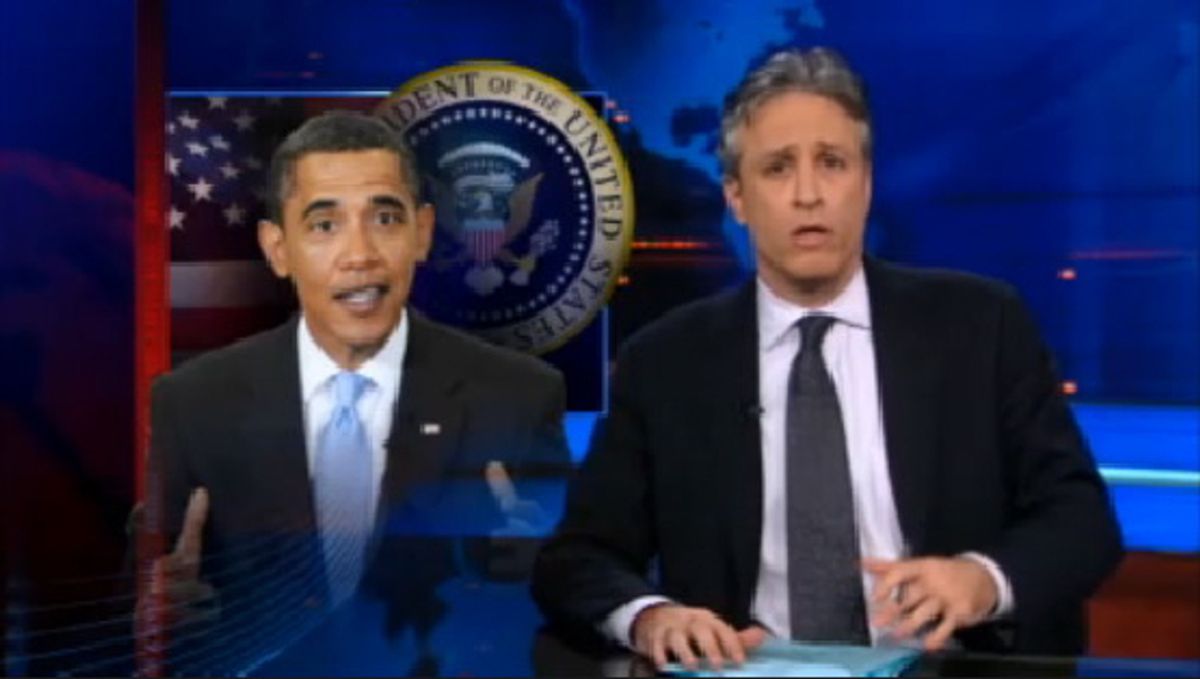 When ACLU Executive Director Anthony Romero last week addressed the progressive conference America's Future Now, he began by saying:  "I'm going to start provocatively . . . I'm disgusted with this president."  Last night, after Obama's Oval Office speech, Jon Stewart began his show with an 8-minute monologue on Obama's executive power and civil liberties record which, in essence, provided just some of the reasons why Romero's strong condemnation is so justified.  None of this will be remotely new to any readers here, but it's still nice to see its being distilled so clearly by a voice which even the most hardened Obama loyalists have decided is a credible and trustworthy one (at least when he's mocking Sarah Palin and exposing Fox News; we'll see what reaction this provokes from them, if any).  One point:  contrary to the blatant strawman incessantly raised by those loyalists, note that the criticisms here are not grounded in complaints that Obama has failed to act quickly enough to usher in progressive policies -- let's repeat that:  the vast bulk of criticisms of Obama are not grounded in complaints that he has failed to act quickly enough to usher in progressive policies -- but are instead based on horrendous policies which Obama himself has affirmatively and explicitly adopted as his own, many of which directly contradict what he vowed to do as President (speaking of which:  see this NYT Editorial today lambasting what it describes as the Obama administration's disgraceful and inexcusable conduct in the Maher Arar case):

UPDATE:  I'm working on writing about the extremely strange case of Bradley Manning, the Army Private and intelligence analyst who -- according to Wired's Kevin Poulsen and Kim Zetter -- contacted convicted hacker and mental illness sufferer Adrian Lamo, out of the blue, and confessed, over the Internet, to leaking a slew of sensitive materials to WikiLeaks, including the Apache helicopter attack video that caused so much controversy recently.  Lamo then quickly converted from ex-hacker and supposed "journalist" into government informant, turned over his conversations with Manning to federal authorities, thus causing Manning's detention by the U.S. Army.

While I hoped to have something posted today, this is a very complicated and bizarre case in several ways, and I'm still trying to explore a few remaining questions I have, so it may not be until tomorrow.  In the meantime, the long-time, superb commenter (and blogger), DCLaw1, recently unveiled himself on his blog -- welcome to the world of non-pseudonymous blogging, Chris Martinez -- and today, on his blog, has posted an interview he conducted with me about a variety of issues, which can be read here.

UPDATE II:  Kevin Drum writes about the case of an American Muslim who has been effectively banished from returning to the U.S. by being placed -- with no explanation, no due process, and no evidence -- on the no-fly list.   Kevin writes, correctly, that "this is an abomination, pure and simple" and ends by asking:  "How on earth can Barack Obama stand by and continue to allow stuff like this to happen?"  Isn't it clear by now that he "allows stuff like this to happen" because it's what he supports and believes in?  Just look at his own policy pronouncements, which ought to dispel any doubt about that.

UPDATE III:  I'll be on Democracy Now tomorrow morning (Thurs.) at roughly 8:20 a.m. EST, along with Daniel Ellsberg, discussing Manning/WikiLeaks.  I'm not sure if I'll have my piece posted by then, but certainly parts of it will be discussed.  Live video stream and local listings are here.  And for our lovely Neighbors to the North, I'll be on the CBC tonight at 8:45 8:20 p.m. EST, on Mark Kelley's program, discussing the Obama presidency and his speech last night.  I believe CBC shows are live-streamed here.

UPDATE IV:  Several emailers have objected to my use of the term "mental illness sufferer" to describe Lamo in the first Update.  Here is the response I sent to them:

I was referring to the fact that very shortly before this very strange series of events -- which led to the arrest of what appears to be a noble 22-year-old whistle-blower who now faces a very long prison term -- Lamo was involuntarily committed in a mental health facility for 9 days after he called the police reporting that his backpack full of pharmaceutical products had been stolen. I wasn't referring to the Asperger's as much as I was to that incident.

That said, I'll acknowledge that I probably shouldn't have used the term, especially without context. As I wrote on Twitter last night: "The difficultly one has in writing about the Manning/WikiLeaks story is the blinding contempt one has for what Adrian Lamo did." That blinding contempt is probably what led me to use a term for him that, under normally reasoned circumstances, I would have and should have refrained from using.

It is true that Asperger's, with which Lamo claims he was just diagnosed, is classified as a mental illness by The Diagnostical and Statistical Manual of Mental Disorders:  DSM-IV.  So what I said was probably technically correct, but nonetheless gratuitous and motivated by less than noble impulses, so I'll stand by my statement to these emailers that I should have refrained from using that term.  My piece on this whole matter will be up shortly.

UPDATE V:  There's a chance that I may not be ready to post the Manning/WikiLeaks story until tomorrow, as the issues are quite complex and I'm still trying to resolve a few questions.  Last night, the Icelandic Parliament -- inspired by and working in conjunction with WikiLeaks -- passed a new law that provides the world's greatest protections to investigative journalists and their confidential sources, intended to provide a safe haven for journalists (such as WikiLeaks) from around the world.  The impetus was that Iceland's recent financial collapse was enabled by the extreme secrecy behind which its governmental and financial elites could hide, and they now want to do whatever they can to ensure much greater transparency and protection for whistle-blowing.

I was on Democracy Now this morning with the chief sponsor of this bill from Iceland's Parliament, along with Daniel Ellsberg, discussing all of those matters, including the Manning case.  The segment, which I can recommend highly, can be seen here (it's roughly 40 minutes long; my participation begins about 20 minutes into it).