Buzz around the U.S. men's team brings to mind the female players who showed us in '99 what women's sports could be 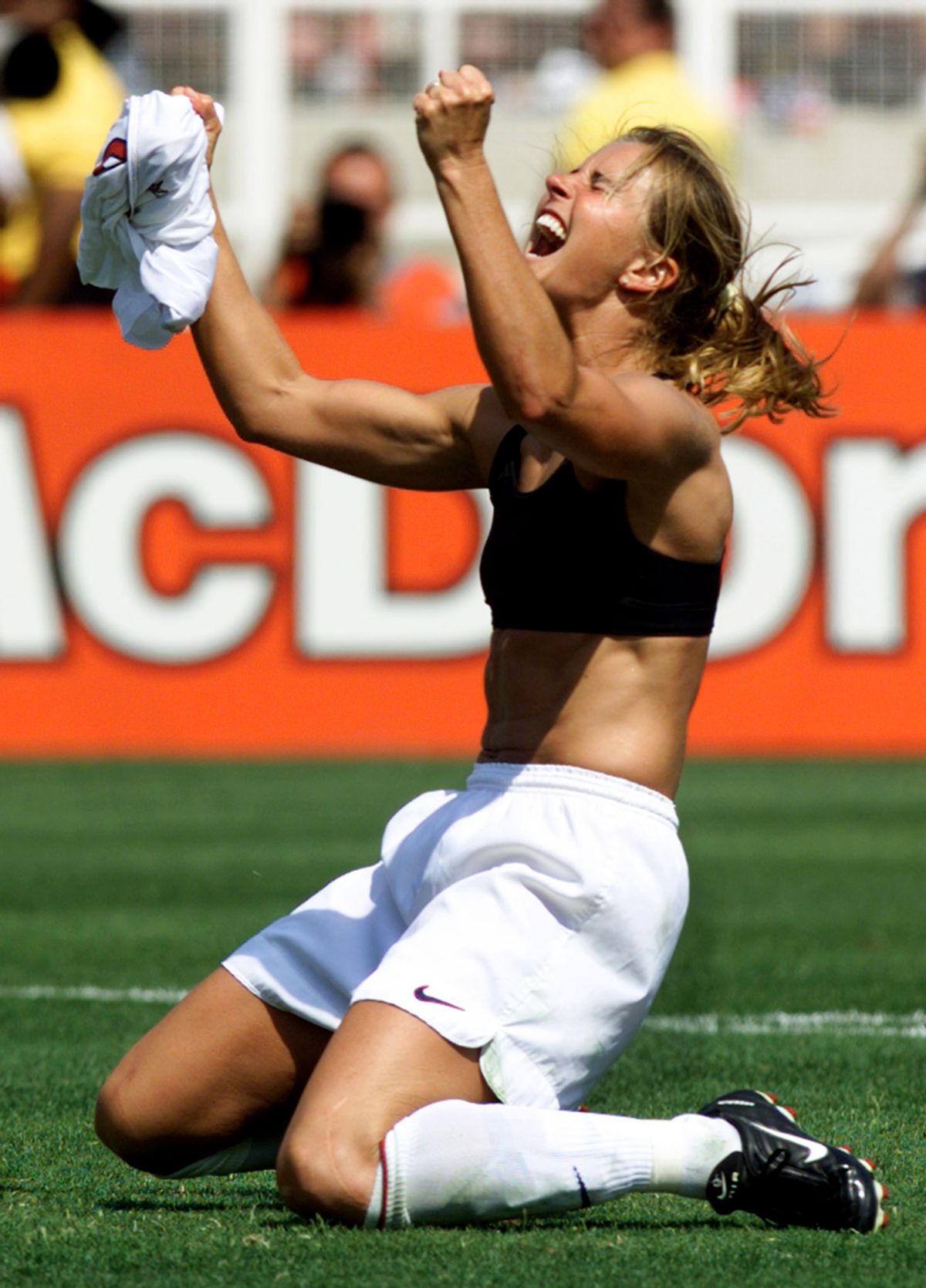 If you've been casually following the current World Cup from the U.S., chances are you've heard a lot about two things: Shakira's soul-crushing tournament anthem, "Waka Waka," and the U.S.-England showdown this past weekend. If American commentators are to be believed, that game -- much like the Shakira song, I hope -- is the kind of thing that happens only once in a generation. The Wall Street Journal's Matthew Kaminski went so far as to declare that the face-off was "the most anticipated soccer match in American history."

Well, I don't have a hype-o-meter on hand right now, but the TV ratings are in, and in fact Saturday's game proved to be the most viewed match played by the U.S. men's national team in more than 15 years. Notice, though, that I said the men's team, because when you're talking U.S. soccer, that's a rather crucial distinction. This team may have outdone their own previous performances, but there's still only one U.S. national team that's ever gotten TV ratings to rival an "American Idol" finale, and that's the women.

For U.S. soccer fans, it is easy to bemoan the country’s apathy toward the World Cup and the game in general. After all, this is a country that can't even get on the same page as the rest of the world about what soccer -- or is it football? -- is called. But a decade ago, when the U.S. women’s national team made a blazing run through the 1999 World Cup, their final victory over China pulled in a staggering 19 million viewers (at least according to ABC -- many estimates go as high as 40 million). In any case, that's more than tuned in to the World Series or the Stanley Cup that same year and at least twice as many as watched the U.S.-England game this past weekend. In a single tournament, the team secured America its own peculiar and enduring soccer legacy, as the only country to have a women's team more popular than its men's team.

As the '99 women's team blazed through the tournament that summer, however, it became clear that this team wasn’t just interesting for being athletes on a run to the world championship. For at least some viewers, the intrigue came from watching a team of skilled multitaskers -- they could play world-class soccer and have vaginas at the same time. A columnist for the San Francisco Chronicle voiced a widely circulated question when he wrote, "Is it acceptable to point out that the American women are very attractive?" And when one member of the squad, Brandi Chastain (she of the sports bra and six pack fame), posed nude for a men’s magazine, anger boiled up from the fan base -- just what kind of role model for girls did she think she was, slutting herself out like that?

In 1999, however, I was 10 years old, and most of this discourse went straight over my head. Here’s what I saw: a female soccer player starring opposite Michael Jordan in a Gatorade commercial, a women's sports team that drew 90,000 fans to a single game, screaming teenage boys in Mia Hamm jerseys. It was the golden age -- albeit brief -- of women's soccer, when it was a real possibility that female athletes could draw more fans, more admiration, more awe than men playing the same game.

And you know what? My preteen mind bought it, hook, line and sinker. At the very age where I was beginning to wonder if maybe the boys who told me I wasn't as fast or as strong or as brave were right, the world called back a resounding no. Here, it seemed to say, check this out: a team of world-champion female athletes who have no idea why anyone would ever think that way.

In retrospect, I don't think it's any coincidence that soccer was the vehicle for all of this. Soccer is perhaps the world's most visible and egalitarian stage, where 11 players can become symbolic of a nation, and their presence can pose questions and demand discussion of the way that nation defines itself. It's a place where a colonized country can defeat its colonizer, where an immigrant can prove her value to her country, and where a group of dazzlingly talented athletes can flip on its head the notion that women's sports are just a novelty sideshow.

Women's soccer has gone through a popularity slump since 1999, but for many women like me who are now in our early 20s, it's been seared in our brains in a much more permanent way than the current World Cup ever will. Eleven years ago, in our most formative moments, we saw more than a great soccer tournament. We saw what women's sports in this country could look like -- and we still haven't forgotten.

This summer, though, all eyes will be on the men's team, and I for one am cheering for them, hoping that one day, maybe, they'll be as good as our women.