The GOP's most reluctant Senate candidate

Republicans pleaded with him to challenge Patty Murray, and Dino Rossi doesn't seem happy that he listened to them 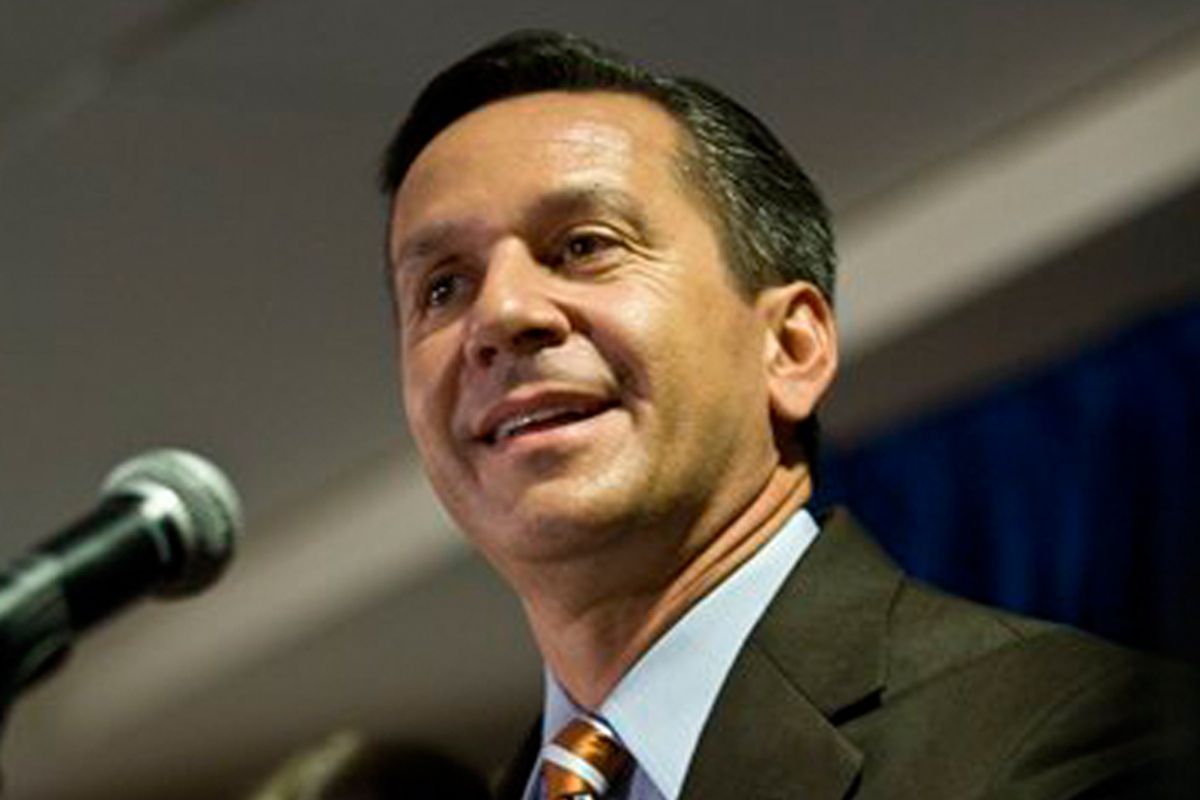 SEATTLE -- It took Republican Dino Rossi months to decide whether he wanted to take a shot at unseating Washington state’s senior senator, Patty Murray. A three-term incumbent, Murray, polls show, is potentially vulnerable in November, even though she's also the state's most popular Democrat.

While Rossi was slowly weighing his options earlier this year, he flew out to D.C. to consult with Republican Party leaders, got a personal pep talk from new GOP star Scott Brown of Massachusetts, and was the subject of flattering public statements made by the head of the National Republican Senatorial Committee, Sen. John Cornyn of Texas, who in April called Rossi a "strong fiscal conservative" poised to help his party win one of the 10 seats it needs in order to take back control of the Senate.

Still, Rossi wasn’t sure, and it was late May before word leaked from D.C. -- not Washington state -- that he would soon be announcing his intention to run. The night before his announcement, Rossi could be found in a banquet room at an upscale Italian restaurant in the Seattle suburb of Bellevue, acting not at all like a guy who was on the verge of stepping back into the political arena. This up-by-the-bootstraps real estate investor, whose past relationships with some legally challenged businessmen had been used against him in two close-but-failed runs for governor in 2004 and 2008, and who must have known he would face similar attacks in any 2010 campaign, had decided to spend announcement eve getting paid to speak at a seminar designed to teach people how to make money off of foreclosures.

It would have been easy for Rossi to take the foreclosure seminar off his schedule in order to keep Democrats from mocking him for doing something seemingly out of step with average Washingtonians struggling to stay in their homes. Instead, there he was telling moneyed investors "this is the time to purchase," just 12 hours before he used his May 26 campaign kickoff on YouTube to lament the deep recession that has left many non-investor Americans feeling like they're sitting "on the edge of a fiscal cliff."

With the video announcement out of the way, Rossi's first in-the-flesh public appearance as a Senate candidate came the following evening at the Weatherly Inn, a suburban assisted living and dementia care facility about an hour south of Seattle. It wasn't your typical kickoff rally, filled with screaming supporters and soaring rhetoric and maybe even some bunting. Instead, Rossi stood in the facility's dining room (where the only meaningful decoration was three balloons, two red and one blue), nodded toward some state legislative candidates whom he'd previously agreed to come and talk about, and then launched into a rambling seven-minute campaign speech in which he lodged some general complaints about an overreaching federal government and promised a "five-month sprint" to the election.

After which he all but sprinted out of the room, not to be seen again at another public event for two weeks.

This kind of stumbling out of the gate has led political observers in Washington state to wonder whether Rossi's heart is really in this race -- whether he truly sees this as the best chance he’ll ever have of breaking his political losing streak, or whether he was strong-armed into this contest by national Republicans whose real aim is to tie up Murray's considerable war chest so that she can't assist Democrats in other states where the Republican challengers have a better shot at victory.

Rossi only keeps providing more reasons to wonder. Last Friday, his campaign announced his first general media availability, at the state Republican Party convention in Vancouver, which is near the Columbia River and the border with Oregon. Again, he lasted seven minutes before speeding away from political reporters, who complained afterward to his newly arrived spokesperson that he hadn't answered their questions on basic issues such as immigration and abortion. (If the reporters wanted more detail, there wasn't really anywhere else to go; Rossi's campaign website, now three weeks old, still lacks an issues page. In fact, dinorossi.com offers only a single page, featuring the old YouTube video announcing his candidacy and a solicitation for volunteers and donors.)

Then, this past Tuesday, a few days after that brief media availability in Vancouver, Rossi was back at that same banquet hall at that same suburban restaurant, giving another paid real estate seminar, this one promising to answer a question that absolutely no one in politics has been asking him: "Is now the time to buy a waterfront home?" His spokesperson, Jennifer Morris, said he plans to do another similar seminar soon (even though the man who introduced Rossi told attendees that "this is one of the last events he'll be doing before he focuses on the campaign").

Once again, Democrats pounced. "What's Dino Rossi doing?" asked Democratic spokesperson Anne Martens in a recent e-mail to political reporters, before answering her own question. "Pitching multi-million dollar real estate deals." A commenter on a Seattle Times story about the waterfront home seminar wrote: "No wonder Rossi was so hesitant to enter the race! He had a contract to do talks on how to profit off the backs of poor people losing their homes."

It could be that Rossi is actually trying to follow, in his own way, a national Republican strategy that Hotline recently summarized as "shut up." The idea is to keep Republican Senate hopefuls such as Rand Paul in Kentucky and Sharron Angle in Nevada, whose every utterance seems to offer an opportunity for Demcorats to paint them as too extreme, from shooting themselves in the foot. Don't talk unless absolutely necessary, this strategy goes. Just sit back and let the general tide of anti-incumbent (meaning anti-Democrat) frustration do its work.

What makes this explanation unlikely, though, is that Rossi, from his early career in the state Legislature all the way through his failed campaigns for governor, has always run as a calm, collected moderate, someone far from needing to be managed like Paul, who had to walk back statements suggesting he doesn't support the Civil Rights Act, or Angle, who is now explaining past statements calling for the dismantling of Social Security and the abolition of fluoridated drinking water.

And yet, Rossi now lags behind Paul and Angle in basic transparency on the issues. Even Angle, who briefly pulled down her online issues page after she won Nevada's Republican primary, now has an issues page available for anyone with an Internet connection to read. Meanwhile, Paul's issues page is so detailed it has buttons for the A-G, H-P, and Q-Z sections. In fact, there's no other major Republican Senate challenger aside from Rossi who currently lacks an online issues page -- a bizarre distinction for a candidate in a state filled with Web-savvy voters and high-tech companies like Microsoft.

Perhaps Rossi is keeping quiet not so that he can avoid inviting more Democratic attacks, but so that he can avoid making moderate statements that might alienate Tea Partiers in advance of his state's Aug. 17 primary. National Democrats have certainly pushed this idea, reveling in the notion that Rossi was put in a difficult pre-primary bind when, back in May, Sarah Palin waded into the Washington Senate race and endorsed Tea Party darling Clint Didier, the former NFL tight end and current alfalfa farmer from eastern Washington. But this analysis misses a fundamental fact of Washington state politics: The state’s primary is a "top-two primary," of the kind that California voters just enacted, meaning the top two vote-getters from any party advance to the general.

Having a top-two primary removes the hothouse effect of registered Republicans going at each other hammer and tongs over intra-party issues, thus denying an insurgent like Didier some potentially helpful political friction. (Washington's Republican party didn't even formally take up the question of Didier vs. Rossi at its convention.) The top-two system also allows for more primary day influence by moderates and independents, who appear more likely to favor Rossi. On top of that, a recent poll that mimicked the likely Washington primary ballot by including Didier, Rossi and Murray in the list of choices found that while Rossi was behind Murray, he was way ahead of Didier -- by a 26-point margin.

Barring a summer implosion, then, Rossi seems to have nothing to fear from Didier -- and ultimately, everything to gain from heightening his contrasts with Murray.

Another explanation for the relative silence could be that Rossi is feeling supremely confident about polling that has shown him close to -- and at times even with, or even slightly ahead of -- Murray. But this kind of confidence would be misplaced. The Washington Poll, among the most thorough and respected of the public polls that have looked at the Murray-Rossi contest, surveyed 1,695 registered voters in Washington state over most of the month of May and found that among likely voters, Murray solidly beats Rossi, 46-40 percent. (A newer Elway Poll, released this week, confirmed those findings, showing Murray beating Rossi 47-40.) And even the most optimistic of polls don't suggest Rossi can quietly coast to victory.

The most likely theory, then, seems to be that Rossi is simply hunkered down trying to raise a huge amount of money after wasting so much time dithering about whether to run. On June 3, one week after he announced his candidacy, he put out word that he'd already raised $600,000. But that's not even one-tenth of the $6.3 million Murray has on hand. Plus, for an excited and determined candidate, raising cash is generally not incompatible with projecting a competent and confident aura.

Rather than proving he can do both of these things, however, Rossi is now leaving an opening for speculation as to why, exactly, he got in this race -- and for Murray to say, as she did at a recent fundraiser in Seattle: "Unlike some others in this race, I have never hemmed or hawed or hedged my bets. I have never wondered whether or not I wanted to fight for you every day, or whether it was worth it to me, personally, to be your voice fighting for this region."

Rossi's most convincing retort to this came in an aside during his June 11 media availability. As he was telling a reporter about the major question he had on his mind during all those pre-announcement meetings in D.C. ("What would this be like for my family if I were to run?"), Rossi suddenly seemed to realize that the race was now on, he was in fact in it, and yet so many of his words were still wandering through the past, trying to explain how the once-hypothetical had mysteriously become the no-longer hypothetical. He interrupted himself. It was day 16 of his Senate candidacy.

Eli Sanders is an associate editor at The Stranger.