It's ridiculous, it's insane, but is it really so wrong to want your kids to be VIPs? 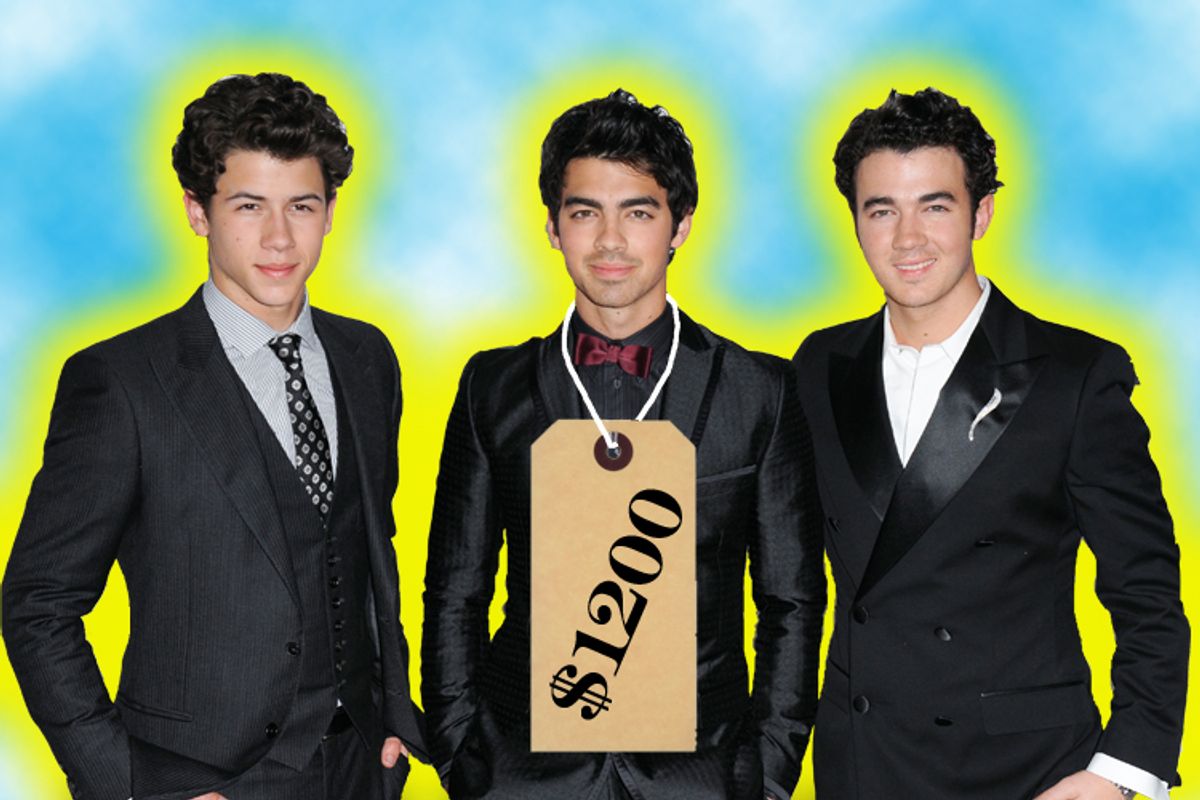 My 9-year-old daughter's best friend Sierra has VIP passes to see the Jonas Brothers this summer. It's a big blowout at the Comcast Center in Massachusetts in August -- the Jonas Brothers, Demi Lovato and the cast of "Camp Rock." What better way to end their summer than with a bang like that?

I can't name one Jonas Brothers song, but I know most of the lyrics to Demi Lovato's songs and so does my 5-year-old, who sings in her car seat with a fake microphone to and from kindergarten every day. Sometimes she makes up lyrics. I swear Demi Lovato does not have any songs about fishing, but my 5-year-old seems to think she does.

One day, while listening to the theme song to "Sonny With a Chance" -- the typical Disneyesque song about young dreams of celebrity stardom all coming true with a wink, a smile and a positive attitude -- the idea seizes me: I am going to buy VIP passes to the freaking Jonas Brothers. They deserve this. If Sierra can go, then my kids can go, too. My daughters are going to get their pictures taken with Nick and Joe Jonas and Demi, who will undoubtedly discover them as the young, talented beauties they are.

Just before dinnertime with the extended family, I scour Ticketmaster and other concert ticket sites and there they are, the gleaming golden Jonas Brothers tickets. In the boys' photograph it appears they have halos glowing behind them; behold the angels of teen fame and wealth, the American dream for today's youth. Comcast seats 19,000, according to its owners, Live Nation. But less than half of those seats are covered. The rest are in an open pavilion, or a sprawling lawn. I look for sections 1, 2 and 3 in the amphitheater. Seats for four. VIP. (The tickets say nothing about having your picture taken with the performers, but as a reporter I will figure out a way to make that happen.) The price?

"It's more than a lot. It's ridiculously a lot," says my wife, a Brazilian woman whom I will now refer to as the Master of No. "We are obviously not paying $1,200 per ticket to go see the Jonas Brothers."

And she's right, of course. There is no way I can afford that. The bill for all four of us would come out to more than I have ever earned in a month. But there is another option.

"They also have cheaper VIP seats on the lawn for around $350 outside," I say. "I won't go. Just you and the kids will go. Imagine if we had that kind of money," I say, looking at my mom with the vague hope she might chip in. "I'd do it. That'd be something to remember."

"But Daddy, what if it rains? I don't want to see Demi singing in the rain," says my youngest.

My oldest is mildly disappointed. She's a good kid. None of that, "Aw, but Sierra and Olivia are going!" Sulk. Pout. Get sent to her room. That doesn't happen.

"Nice going," my brother says. "You got them all pumped up for Jonas, and you can't deliver."

That night, over electric margaritas from the house bar, I try to reason with the Master of No, but she isn't having any of it.

No, I don't want to listen to our youngest complain about how loud it is all night long for $1,200.

No, our children don't need to see girls screaming like maniacs over teenage boys.

No, we don't have that kind of money.

No, we're not going to turn our girls into teenagers before they're 10.

"What if I found cheaper seats?"

No answer. That means I had a chance.

I really wanted those VIP tickets to the Jonas Brothers, though. I probably wanted to go more than my children did. When I was a child, my parents never did anything remotely cool like that for me. All parents want to do more for their children than their parents did for them. It's a way of showing our parents we are better than they are, and in showing them that we are better and more successful than they ever imagined, we assume in our childlike minds that we can finally win their approval and love.

More than that, this pursuit made me feel like a kid again, with my whole life ahead of me and all the possibilities that youth brings. I can picture myself there, air drumming Lovato's "Here We Go Again" just to see my 9-year-old roll her eyes.

My first concert was for Bon Jovi's "Slippery When Wet." I was 18. But there were no concerts for children when I was growing up. That's because advertisers hadn't yet discovered the tween and pre-tween market yet. That didn't start until the late '80s, when every toy had a storyline you could witness on VHS tape, or watch on Saturday morning. Things like "Masters of the Universe," "My Little Pony." Combine that with the boy-band boom of the '90s and you have an unbeatable combination. Disney is a master at this, and Nickelodeon is getting better. Its "iCarly" star Miranda Cosgrove is plastered all over Times Square with her new CD release. Pre-tweens are a whole other animal now and my daughters are in the cross hairs. They've got style, they've got flair, they wear colorful rubber Silly Bandz. They dream of having their own show on the Internet, just like iCarly.

Honestly, though, my children are down to earth. It's me who's bad, stuck in the iron grip of the tween marketing squeeze. A thousand bucks to go see the Jonas Brothers for an hour? Wow. Capitalism sucks.

I try my pitch to my wife the next day, downgrading from VIP seats to regular tickets. My argument: Just as we raced to Disney World for lunch and dinner with the princesses when the girls were in their princess phase in 2006, we should do this now. When they really are concert-going age, they're not going to want anything to do with us, and we probably won't want to see Lil Wayne anyway.

"You know, I saw that Selena Gomez was in concert and she is just $25," my wife says of the "Wizards of Waverly Place" star.

"Where is she playing?" I ask.

"Some fair in Ohio," my wife says.

Poor Selena. I imagine her self-conscious teenage ego is semi-devastated by the fact that her colleagues are fetching five times that at sexier venues. "Well, we're not going to Ohio to see a concert," I say.

"It would probably come out cheaper than VIP seats at the Jonas Brothers," she says. I calculate: $300 round trip ticket to Cleveland from Boston per person, another $150 for a hotel. Dammit, the Master of No is right! It would be cheaper.

In my frustration, I tell her, "You're too negative. You criticize me too much and tell me what to do! Stop criticizing and telling me what to do already." We pull into a garden shop near our house. I park crooked. She keeps quiet.

Over time, my wife starts to come around. I think I sold her with the princess phase bit. Plus, I found cheaper tickets for around $70 each. With taxes and all, a night out with the Jonas Brothers and Demi Lovato will come out to around $500. It irks me to think that these guys, who are at least 20 years younger than me, are getting rich off this. I start to steam at the injustice a bit, then I try to walk out the "in" door. It doesn't open. I notice my wife is already in the parking lot, because she walked out the exit.

"Why didn't you tell me I was walking out the wrong door?" I ask her.

She shoots me a look.

The Master of No might come around yet on Jonas. We'll see. And even if my kids aren't VIPs at the concert, they will be in my house, which is where it really matters to a child.

Meanwhile, my wife shows me some more colorful rubber SillyBandz she bought. She has cheaper taste than me and is easily entertained. These things are just little elephants and giraffe-shaped rubber bands. The kids love them. Better yet, they cost $2.

Kenneth Rapoza was a frequent contributor to Salon back in the late 1990s. He recently worked as a foreign correspondent for Dow Jones and the Wall Street Journal and is still looking for VIP seats to Jonas, or at least backstage passes for his daughters.