In the hot tub time machine with Alan Greenspan

The "Maestro" tells Americans we can't afford our future. Ten years ago, he sang a different tune 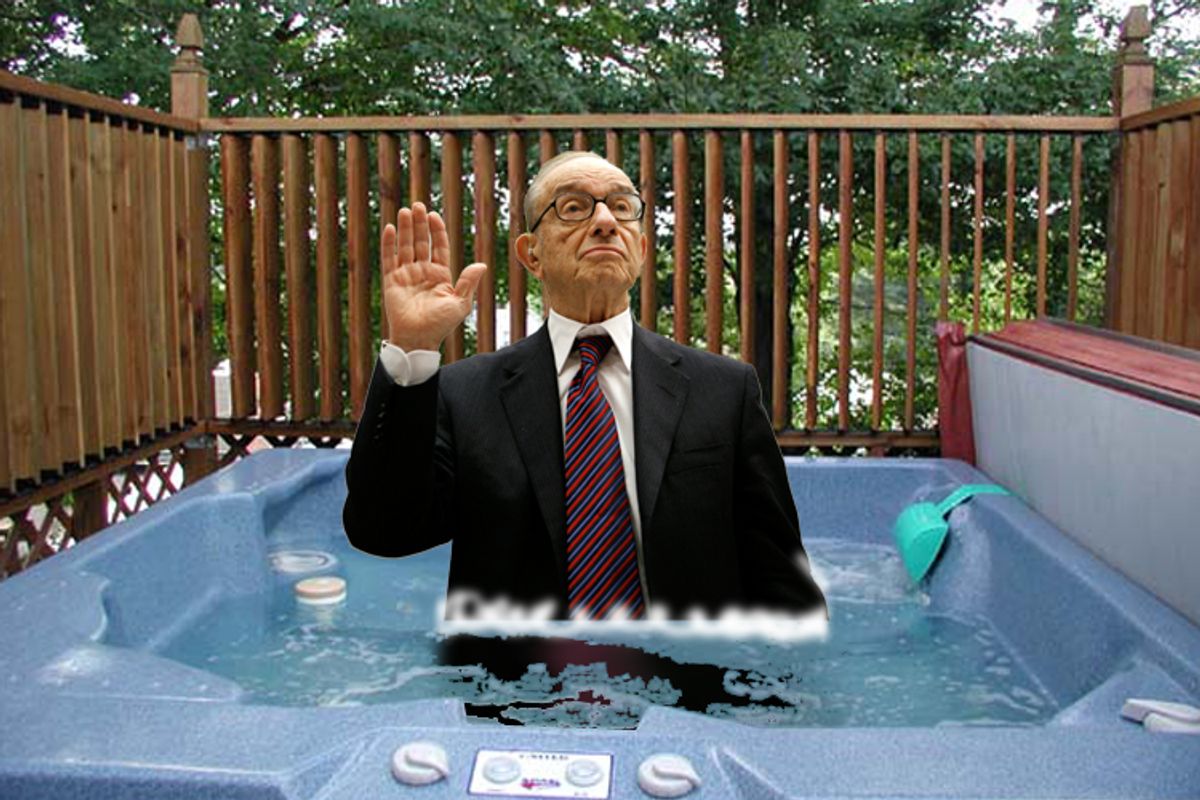 The federal government of the United States better get its finances in order, warns Alan Greenspan in the Wall Street Journal today, or we're going to be in big, big trouble!

If I were seeing a therapist, I'm sure she would warn me that my recent habit of reading opinion pieces in the Journal and then collapsing into a fit of apoplectic befuddlement is not good for either my long-term health or sanity. Calmer minds might  wonder why we should bother paying any attention to the "Maestro" -- a man whose deepest convictions about the infallibility of self-correcting markets have been proven so profoundly wrong. But after Calculated Risk reminded me of a speech Greenspan gave to Congress in 2001, a speech that just gets better and better with each rereading in the years since, I simply could not resist. Please bear with me.

The current federal debt explosion is being driven by an inability to stem new spending initiatives. Having appropriated hundreds of billions of dollars on new programs in the last year and a half, it is very difficult for Congress to deny an additional one or two billion dollars for programs that significant constituencies perceive as urgent. The federal government is currently saddled with commitments for the next three decades that it will be unable to meet in real terms. This is not new. For at least a quarter century analysts have been aware of the pending surge in baby boomer retirees....

We cannot grow out of these fiscal pressures. The modest-sized post-baby-boom labor force, if history is any guide, will not be able to consistently increase output per hour by more than 3 percent annually. The product of a slowly growing labor force and limited productivity growth will not provide the real resources necessary to meet existing commitments.

Sounds grim, doesn't it. We've seen this coming for 25 years, but in the last year and a half, we've lost all restraint and the only hope now is massive cuts in spending.

With that in mind, let us jump in Alan Greenspan's hot tub time machine (yes, I conjured up that image on purpose) and return to 2001, when the U.S. federal government was sitting on a fat budget surplus. Back then, Alan Greenspan's big fear was that the government might actually end up paying off the national debt, and then start using its surplus to accumulate assets that rightfully belonged to the private sector. The future looked too bright!

The most recent projections from OMB and CBO indicate that, if current policies remain in place, the total unified surplus will reach about $800 billion in fiscal year 2010, including an on-budget surplus of almost $500 billion. Moreover, the admittedly quite uncertain long-term budget exercises released by the CBO last October maintain an implicit on-budget surplus under baseline assumptions well past 2030 despite the budgetary pressures from the aging of the baby-boom generation, especially on the major health programs...

Indeed, in almost any credible baseline scenario, short of a major and prolonged economic contraction, the full benefits of debt reduction are now achieved well before the end of this decade -- a prospect that did not seem reasonable only a year or even six months ago. Thus, the emerging key fiscal policy need is now to address the implications of maintaining surpluses beyond the point at which publicly held debt is effectively eliminated.

So what happened? As Tim Fernholz reminds us, the fiscally prudent policies pursued and implemented by President Bill Clinton were summarily abandoned -- with Greenspan's tacit approval. The Bush tax cuts, the Iraq and Afghanistan wars, and the prescription drug benefit -- none of which were matched by spending cuts, or balanced by offsetting revenue -- quickly erased the surplus. Meanwhile, the new spending initiatives of the last year and a half were a direct response to a "major and prolonged economic contraction."

Funny how it works, huh? When running a budget surplus, Greenspan did not foresee a problem in dealing with the expenses likely to ensue from baby boomer retirement. Instead, the problem was the surplus! But when running a deficit because of policies executed by a Republican government while he was in charge of the Federal Reserve, combined with a rescue effort aimed at counteracting the effects of the financial disaster for which he was at least partly culpable, suddenly, the future is a threat.

I am reading, right now, Liaquat Ahamed's stunningly good "Lords of Finance," an exceedingly well-written and fascinating look at the central bankers who bungled the world's way into the Great Depression. At the outset, Ahamed notes that while the four men who are the focus of his attention, England's Montagu Norman, the U.S.'s Benjamin Strong, Germany's Hjalmar Schacht, and France's Emile Moreau were, during the '30s, towering figures of international renown, their names have mostly been forgotten now.

Greenspan, I hope, will not be so lucky. But if he is, here's hoping that the 22nd century spawns a historian as excellent as Ahamed to remind a new generation just how disastrous the tenure of Alan Greenspan was as Federal Reserve chairman, and how the Wall Street Journal regularly provided a venue for his self-serving, blind hypocrisy.