How does Joe Barton's GOP ever win?

An anatomy of Republican populism 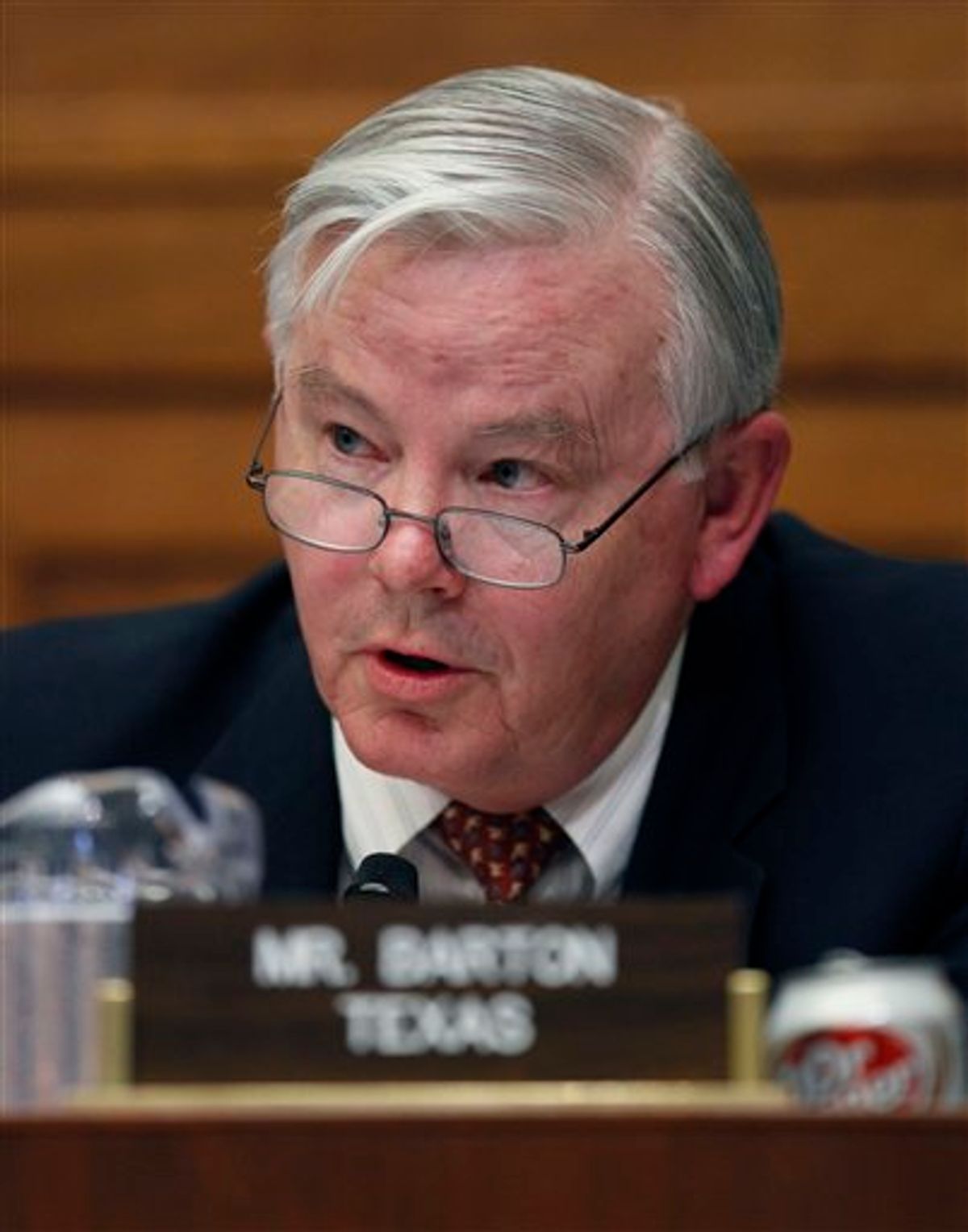 When Rep. Joe Barton used his official position to grovel before a multinational corporation, he became the perfect emblem of the modern Republican Party. There's no version of small-government principle that suggests that private interests of any kind should be able to pass the bill off to the public for damage they do. You can only think that if your idea of defending the free market has been warped into wanting to give free money away to business; that's what it would mean to let BP off the hook.

Barton has apologized by now, under pressure from his party. But it's too late: This was what Mickey Kaus, the former blogger and defeated Senate candidate, calls a Category II Kinsley gaffe, in which a politician says something he means, but is embarrassed by. As Joan Walsh pointed out yesterday, the impulse to shield BP from responsibility is pretty widespread on the right.

How is a party that is the devoted servant of corporate power still not only viable, but reliably able to win large chunks of the working-class vote? The right hand of the GOP plays a waltz for the party's dance with big business; the left hand beats out a populist rhythm. Somehow, the two don’t cancel each other out. How can this be?

To try to understand this, we’ve got to go down a path that'll take us pretty far from Joe Barton.

The classic treatment given to this question in the modern popular press comes from Thomas Frank. In his book "What’s the Matter With Kansas?" Frank argued that the GOP's corporate elite -- the Bartons -- spent the second half of the 20th century using social issues to misdirect populist anger. It's more or less an argument for false consciousness, the outmoded but attractively simple idea that working people have failed to recognize that they're locked in class conflict with their exploiters, and instead have come to believe in some other, false story of how society works. "Kansas" seems to have gained fairly widespread acceptance among mainstream, cosmopolitan liberals looking to diagnose the GOP's success with the white working class as some kind of ailment. It's the argument Barack Obama dug up when he made his infamous "cling to guns and religion" comment. (When it comes to Frank's thesis, or the broader question, we are in particular talking about the white working class, and especially, the white male working class. Women and African-Americans have, for obvious reasons, been less tempted to identify with the powerful.)

Frank doesn’t say this in his book, but he was joining a rich and long-standing debate about this issue in history, philosophy and sociology. You could fill up a library with books on the question of working-class conservatism. And from all that writing, you'd find a good amount of criticism of Frank's argument.

One problem with "Kansas" is that it casts the working-class Republican voter purely as a victim.  In doing this, Frank fails to ask how the political terrain might look to the people they pity, and what kind of action those people might be taking to help shape it.

The question to ask here if you are a white member of the working class -- the demographic type around whom this debate swirls -- is what can you do to gain more control over your life? Because that’s what politics is: people getting organized, or not, to control their lives. What are the weapons of this weak group?

You can't form a union, most of the time. The combination of the global labor market, hostile labor law, implacable corporate opposition, and a desiccated union movement more or less rule that out. And why should you want to, really? Labor organizing incurs significant risks. Meanwhile, the union movement, for all of its value, remains bureaucratic and unimaginative, and has consistently failed to address the aspirations and desires of American workers.

Likewise, the Democratic Party won't commit to a real relationship. Instead, it insists on the unconvincing proposition that workers can share it with business and professionals, and still get their needs met.

So that leaves you without tools to forthrightly conduct class politics in public. You've got no hope, and it seems almost foolish to dare to try. What's left? Well, if you're white, you can fall back on racism; if you're a man, you can oppose gender equality. From one angle, the idea of social equality, whether along racial or gender lines, looks like a modern fabrication -- just one more thing eating away at what’s precious and important. High capitalism does nothing if it doesn't throw ancient values and habits up in the air like confetti, and make a mockery of the traditions of village, church and tribe. (That "ancient traditions" have themselves often been conditioned by American capitalism is of course also true. The more-or-less modern idea of "race" was invented to make slavery possible, but is felt no less genuinely for that. Nor has the origin of the idea of race limited in any way how we extravagantly reproduce it, year after year.)

It's uncomfortable to think this way about egalitarian movements like feminism and the pursuit of racial equality. Obviously, nobody on the left should renounce gender equality or civil rights just because these ideas have produced enmity among a certain group that we might otherwise find sympathetic. But we also shouldn't allow ourselves to slip into condescension, to imagine that people are just bigots and fools, tricked into opposing their own self-interest. They are participants in politics just like everyone else. Even the citizen who doesn't vote at all is saying something about politics. The fact that some methods of political participation don't make sense to liberals doesn’t mean that they don't make sense at all.

By the way, this doesn’t exactly describe the Tea Party movement, which is less a workers' populist movement than it is a middle-class one. Tea Partiers appear to be mainly small-business people and the like -- petty bourgeois, as academics say. There's frankly little use in agonizing over "why they hate us." The resentments of the passed-by middle class have always fueled the most right-wing politics in modern democracies. If you go and read a good history of the second Ku Klux Klan – the 1920s movement – you'll be amazed at how familiar much of the rhetoric is. But spare some sympathy, even for Glenn Beck's most devoted followers. The democracy of Goldman Sachs and Wal-Mart is a tough place for the community bank and local hardware store.

This is a highly abbreviated summary of some of the issues around the weird dual nature of American conservatism. And as I warned, we're awfully far now from Barton and BP. But it looks now like the GOP is set for some significant comeback in November. There's not a bad chance that Barton will end up as chairman of the House Energy and Commerce Committee. And if he does, don’t groan about those idiot voters out in Texas and Kansas. Working-class voters don’t belong to the Democrats. They have a logic all their own, and liberals can only afford to ignore that for so long before, inevitably, it always finds a way to catch up with them, and sweep in corporate flunkies like Barton along with it.