The good girl of '80s rock writes about feminism, Nazi hunting and the tricky dancing in "Love Is a Battlefield" 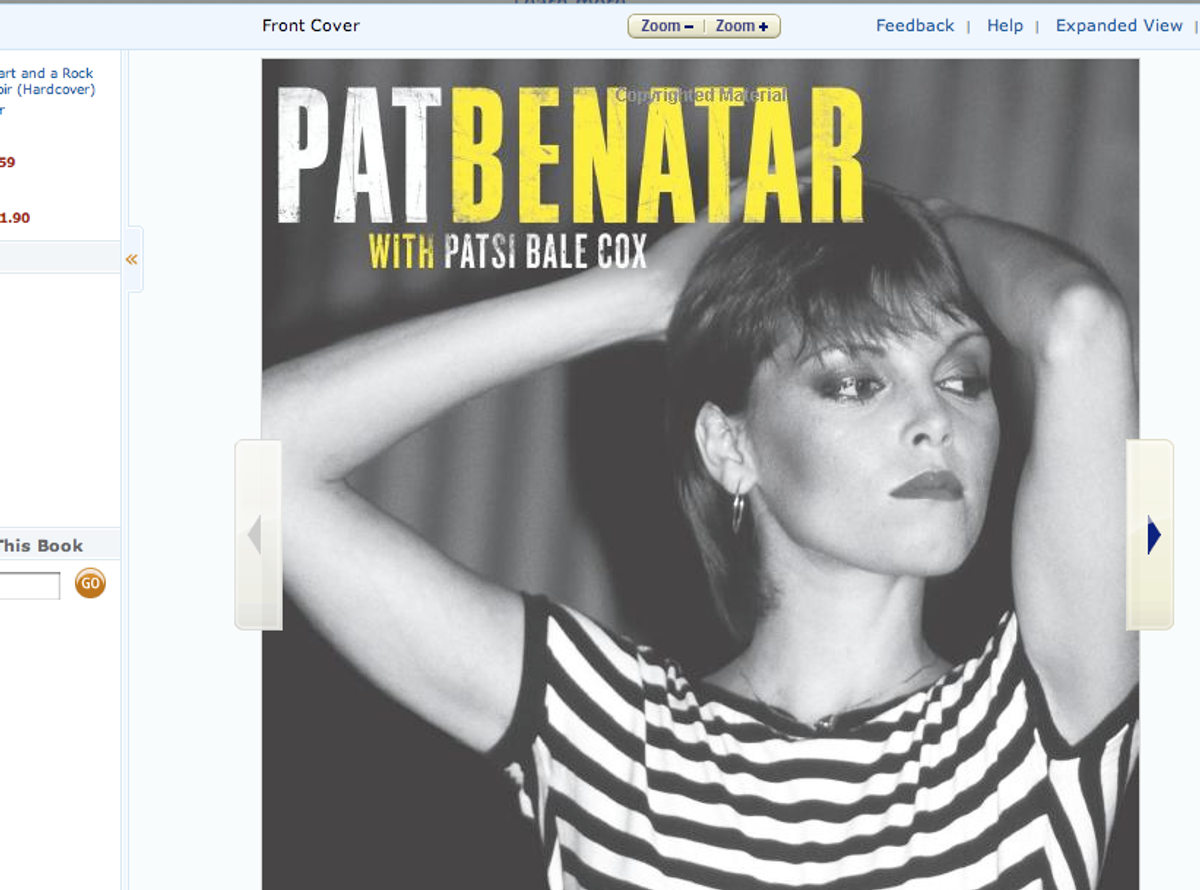 A close-up of the cover of "Between a Heart and a Rock Place: A Memoir."
--

For a 1980s arena rock superstar, Pat Benatar is surprisingly well-adjusted. Thirty years after "Hit Me With Your Best Shot" became a beloved teenage anthem, Benatar is happily married to her longtime collaborator Neil "Spyder" Giraldo and raising two daughters. There have been no stints in rehab, no tearful confessions to the tabloids, no appearances on "Celebrity Apprentice." By all accounts, Benatar is shockingly normal. And in the rock star world, that's no easy task. "Not partying may have made me boring by rock star standards," Benatar writes in "Between a Heart and a Rock Place," her new memoir, "but at least I can still sing." Besides singing, Benatar had to contend with her children taking their first steps on a tour bus, rampant sexism at her record label, and being married to a member of the band -- always a recipe for a "Behind the Music" special. Below: The juiciest parts of Benatar's new book.

10. While growing up off the South Shore of Long Island, Benatar -- born Andrzejewski -- used to horse around on her friends' clam boats. Once, she helped cause a boat collision that required her to be towed back ashore by the Coast Guard.

9. On her first marriage, to Dennis Benatar: "I knew the day we wed that I was making a terrible mistake ... I looked up and saw the man I thought I wanted to marry and suddenly my brain said, Run! I wish I'd done that."

8. Benatar was classically trained as a vocalist in high school, but gave it up after she married. She was motivated to go back into music when she saw Liza Minelli in concert and thought "This is ridiculous. I’m a better singer than she is."

7. When Benatar began singing in New York night clubs, she became fast friends with comedian (and "Law and Order" veteran) Richard Belzer. "I finally figured out that Belzer waited until I had just taken a big gulp of coffee to jump in with a one-liner ... I think I had coffee and milk shooting out of my nose every 15 minutes."

6. Benatar and Giraldo began dating soon after she divorced her first husband, but broke up for a year. Benatar would get livid at Giraldo's female fans: "At one concert in particular, some obviously drunk girl in the front row opened her blouse during the first set and proceeded to bleat, 'Neil, Neil' for the entire show. Occasionally she’d put her hands onstage and when we got to the show’s closer, "Heartbreaker," I stepped on them and stood there until the song was over just to shut her up."

5. The video for "Shadows of the Night" features Benatar as a Nazi-hunter. Two of her bandmates played Nazis. The video also had the young guild actors Bill Paxton and Judge Reinhold.

4. When she was promoting "Crimes of Passion," Benatar's label ran an advertisement in "Billboard" that had been airbrushed to make her look naked. When Benatar saw it, she threw a fit: "Aside from being embarrassing, the photo was stupid. Didn't they understand that people already knew how I was built? All people had to do was take one look at me. Were Billboard readers suddenly going to flock to my album because I'd miraculously grown new breasts? ... I was aware that the sexy image was something I'd created. I'd never meant for it to be the focal point. My problem wasn't that people thought I was sexy, it was that [they] only wanted the sexy part. It was offensive, but also boring."

3. It took 48 hours of intense rehearsal for Benatar to get the choreography for the "Love is a Battlefield" video down. "Afterwards, I couldn’t walk for days."

2. The version of "Love is a Battlefield" in "13 Going on 30" got Benatar's blessing because her daughter, Hana, loved the movie. Benatar's other daughter, Haley, formed an all-teenage girl band named GLO that opened for Benatar on one of her tours.

1. Benatar played the 90s alt-rock festival Lilith Fair, and has tried to support fellow female musicians throughout her career. "For every day since I was old enough to think, I've considered myself a feminist ... I see women everywhere doing their thing and throwing themselves into situations headfirst, and not taking shit from anyone. It's empowering to watch and to know that, perhaps in some way, I made the hard path they have to walk just a little bit easier."