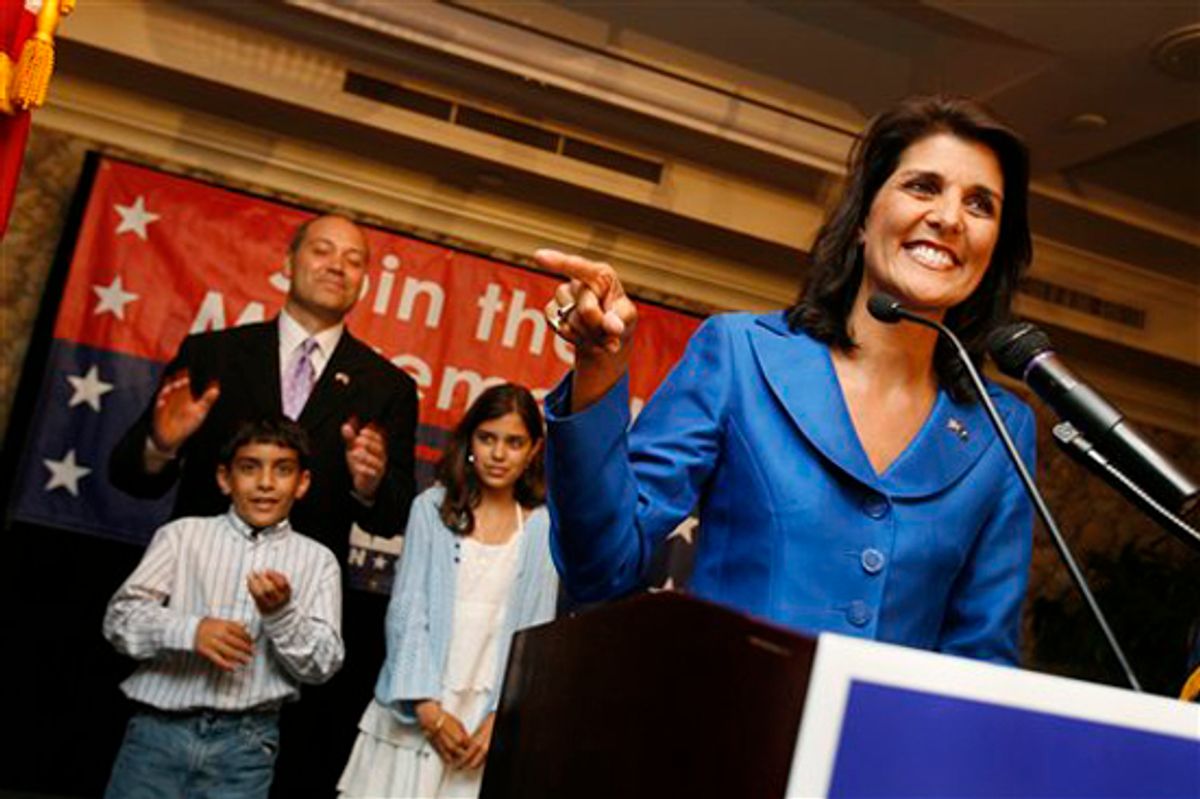 Rep. Nikki Haley, R-Lexington,who garnered the most votes in the GOP gubernatorial primary gives a victory speech to supporters at the Capital City Club in Columbia, S.C., on Tuesday, June 8, 2010. Haley will face Rep. Gresham Barrett in a runoff election in two weeks for the GOP nomination. Her husband Michael, son Nalin and daughter Rana stand behind her. (AP Photo/Rich Glickstein/The State) (Rich Glickstein)
--

Will Folks, the South Carolina blogger and political operative who alleges that he had an affair with gubernatorial candidate Nikki Haley, has endorsed Nikki Haley for governor of South Carolina.

Folks, a creepy, self-promoting weirdo who nonetheless has presented evidence of, at the least, a close personal relationship with Haley, has been under relentless attack from the Haley campaign and her supporters since he went public with his claim a week before the primary election.

Haley came in first in the primary, but still faces a runoff with Gresham Barrett.

Why is Folks endorsing the candidate whose candidacy he seemingly attempted to derail, and who responded by viciously attacking him? Because "Haley would vote the right way on the S.C. Budget and Control Board" and she might cut taxes.

And her opponent is also a real piece of work:

There’s also a “people in glass houses” argument that can be made with respect to this campaign. Specifically, Barrett – who has trumpeted both his Christianity and fidelity on the campaign trail – is widely-rumored to have had an affair with a former staffer. We also know for a fact that Barrett is lying through his teeth when he says that his campaign had “nothing to do” with the pressure that was placed on our founding editor to come forward last month with his acknowledgment.

So, there you have it. South Carolina politics, everyone. The candidates who aren't cryptic, damaged accused criminals are sanctimonious Christians who constantly cheat on their spouses.