What does Jim DeMint want?

South Carolina's junior senator is on a quest to make the U.S. Senate look like a Tea Party rally 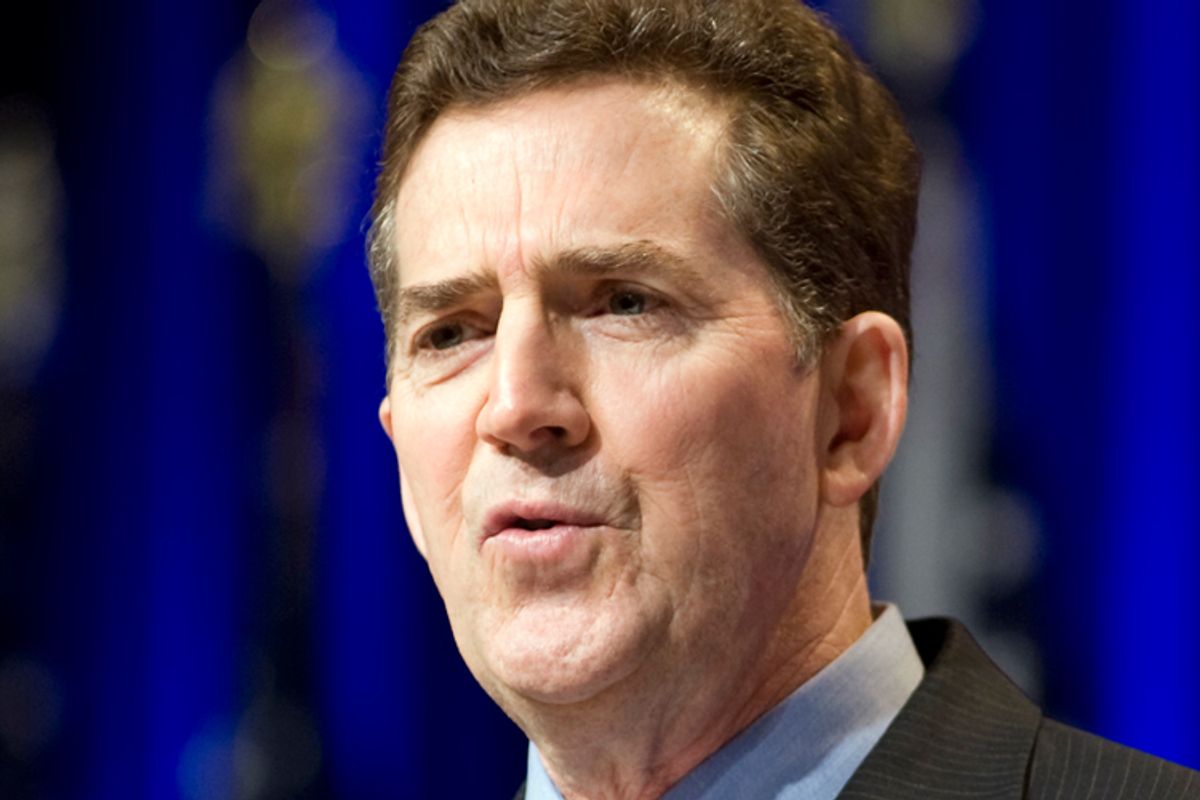 In the past year, Jim DeMint, South Carolina's junior senator, has transformed himself from right-wing outlier to the Senate’s leading tribune of Tea Party sentiment. His influence has expanded despite -- or perhaps because of -- his willingness to thumb his nose at Republican Party elders, a trait that only adds to the intrigue about his ultimate intentions.

Does he hope to displace Mitch McConnell, the GOP leader in the Senate? Might he harbor even loftier -- that is to say, presidential -- ambitions? Or is he content to position himself as the most conservative senator in an increasingly conservative party, and to reap whatever harvest might result?

One thing is for sure: DeMint is one of the people with the most to celebrate as the strange saga of Alvin Greene, the unemployed Army veteran who is (for now) the Democratic Party’s Senate candidate in South Carolina, drags on. Why? Because despite South Carolina’s reputation as a Republican redoubt -- and despite the growing national buzz around DeMint -- the senator’s home-state standing had begun to look surprisingly shaky.

A Public Policy poll in May indicated that only 43 percent of South Carolinians approved of the job DeMint was doing in the Senate. Thirty-nine percent said that DeMint was not spending enough time focusing on his state's interests while in Washington, whereas only 38 percent said his level of commitment to advocating for South Carolina was "about right." Public Policy’s Tom Jensen wrote on his blog that these amounted to "pretty underwhelming approval ratings" for DeMint.

But with Greene as the Democratic candidate, DeMint's safety is utterly assured. A Rasmussen poll released on Tuesday showed him ahead of his peculiar challenger by a 58 to 21 percent margin. So DeMint is seemingly free to continue his march toward the center of the national stage without fear of embarrassment in his backyard.

His progress so far has been rooted in his ability to raise bucketfuls of cash. His leadership PAC, the Senate Conservatives Fund, has mined new and old seams of right-wing support with startling results.

According to the most recent figures filed with the Federal Election Commission, DeMint’s PAC has raised slightly over $2.4 million. It has disbursed much of that money to candidates in the right wing of his party, several of whom have a relationship of mutual antipathy, or at least suspicion, with the GOP's Washington leadership.

The performance of the fund also outpaces that of similar PACs associated with Republicans who are ostensibly bigger national figures. Among those whose PACs trail in its wake are Eric Cantor ($2.18 million), John McCain ($1.97 million), Jon Kyl ($791,000) and even McConnell himself ($684,000).

"Someone who raises a lot of money has a lot of clout," David Frum, the conservative author and former Bush speechwriter, says. "Chuck Schumer has an influence on the Democratic side that he would not otherwise have because of his ability to raise money for colleagues. And it is the same for DeMint among Republicans."

DeMint has also taken risks that have paid dividends. Almost exactly a year ago, he became the first sitting senator to support Marco Rubio in the bitter battle for the Republican Senate nomination in Florida. Rubio's rise ultimately pushed Gov. Charlie Crist, who was then the hot favorite, out of the GOP primary. (Crist is still in the race for the Senate seat, of course, but is now running as an independent.)

DeMint was also a fervent supporter of Rand Paul in Kentucky -- a position that was especially notable given that Paul's GOP primary opponent, Trey Grayson, was the anointed choice of McConnell. DeMint’s endorsement of Paul came the day after McConnell had declared for Grayson.

Of course, there are also DeMint-backed candidates who have failed to ignite, notably Chuck DeVore in California and Marlin Stutzman in Indiana, both of whom were recently defeated in Senate primaries. These setbacks provide ammunition for those who charge that the South Carolinian's influence is exaggerated, not least by him.

DeMint denies that he is aiming to wrest the GOP's Senate leadership slot from McConnell, but his protestations are disbelieved by many.

"He says he is not going to challenge McConnell. Whatever!" one GOP strategist, who asked not to be named, says with a laugh. The strategist also noted that DeMint, "like many other Republicans, probably sees that the 2012 [presidential] field is very open."

Despite DeMint's climb to prominence, it is a stretch to see him as a real presidential contender. The underlying shape of the race weighs against him, since he would appear to have a shot -- and a long one at that -- only if better-known conservative standard-bearers like Sarah Palin and Mike Huckabee took a pass. At the moment, he barely rates an asterisk in most 2012 polls.

But if presidential politics might be a step too far for DeMint, this hardly leaves him powerless. It seems conceivable that November's elections will deliver some new Republicans to the Senate cut from similar ideological cloth to the South Carolinian.

Rubio, Paul, Pennsylvania's Pat Toomey and Nevada's Sharron Angle all fit this description. DeMint’s PAC has contributed significant money to both Rubio and Toomey. Figures from the Center for Responsive Politics’ Open Secrets project show that, when direct contributions and so-called independent expenditures are combined, the Senate Conservatives Fund has helped Rubio to the tune of $324,000. The corresponding figure for Toomey is $82,000. The PAC does not appear to have assisted Paul, while Politico reported on Wednesday that, having remained neutral until the Nevada GOP primary was decided, DeMint has now raised more than $60,000 for Angle through his PAC.

Were all four to be elected, they would represent the beginnings of a "DeMint bloc" -- a small but not insignificant power base.

The election of even one of those candidates would be "a big deal," the Republican strategist notes, not just because of the boost it would give to DeMint's standing but because of the template those campaigns would seem to offer for other politicians who might be inclined to ignore the wishes of their party leadership: "His being the first mover behind Marco Rubio increased his stock price among Senate Republicans dramatically, and it opened people's eyes to see that the political model has changed. Once DeMint raised millions of dollars, it shook stuff up and changed the political chemistry."

It is precisely this willingness to put himself on the line that has endeared DeMint to Tea Partiers and Republican dissenters alike.

Sal Russo, a California-based Republican operative who now works as a key strategist for the Tea Party Express, is one such fan:

"I have never been one to believe that if someone has all the authority then you should defer to them. He has been willing to lead rather than just follow, and we appreciate that."

DeVore, the vanquished California Senate candidate, insists that the South Carolinian's influence within the GOP is "in the ascendant." He adds with evident admiration that DeMint is "someone who is willing to mix it up a bit."

DeVore says DeMint's public announcement of his backing of DeVore was "a pretty significant boost. His PAC immediately contributed the maximum. About $150,000 of the $2.5 million (raised in total), I can directly attribute to his endorsement."

Whether DeMint's approach is so keenly appreciated in Washington itself is rather more open to question. In reporting this article, Salon contacted 20 Republican senators -- exactly half the caucus if DeMint himself is not counted. Not one took up the invitation to talk. (A spokesperson for DeMint also declined an interview request on his behalf.)

DeMint himself has seemed to revel in his outsider status. In the wake of Rand Paul's victory in Kentucky's Senate primary, he gloated that "the Washington establishment threw everything they had at him and yet he prevailed."

To his detractors, his approach is evidence less of an impressive maverick tendency than a lack of political maturity. Dick Harpootlian, the colorful former chairman of the South Carolina Democratic Party, and thus a logical DeMint foe, complains that the senator is able to disregard his party leadership only because he has no real interest in the legislative efforts that are supposed to be a senator's raison d'être.

"If you've no interest in actually passing legislation, it doesn't matter," Harpootlian says, referring to DeMint's shaky standing with the Republican hierarchy. "He doesn't care whether Mitch McConnell is happy, sad, angry or anything else -- it's irrelevant to him."

Harpootlian also suggests that DeMint's surprisingly anemic home-state poll ratings might be due to the credibility of the charge that he is more interested in burnishing his image than in tending to local concerns.

David Frum is not so harsh. He suggests that the answer to the question of what DeMint wants is hiding in plain sight.

"He has told us what he wants," Frum insists. "He wants a much more conservative Congress, and he is willing to run the risk of a lot of defeats in order to get there."

As proof, Frum cites one of the assertions that has catapulted DeMint to the fore of the Republican Party's internal debates. DeMint has said that he would rather have "30 Republicans in the Senate who believe in the principles of freedom than 60 who don’t believe in anything."

Frum's antipathy to this kind of demand for ideological purity is well-known -- and it is reiterated when he drily tells Salon, "I think majorities are better than minorities."

But he also argues that DeMint's critics are wrongheaded when they suggest that his backing of candidates who have failed to win office renders him politically impotent.

"If you take a lot of risks, you are not going to succeed every time," Frum says. "But I don't think it would be fair to him to say that because a certain candidate loses, then he has failed. If he were winning every race, all that would prove is that he was not being ambitious enough."

Whatever Jim DeMint's other failings might be, a lack of ambition is not among them.