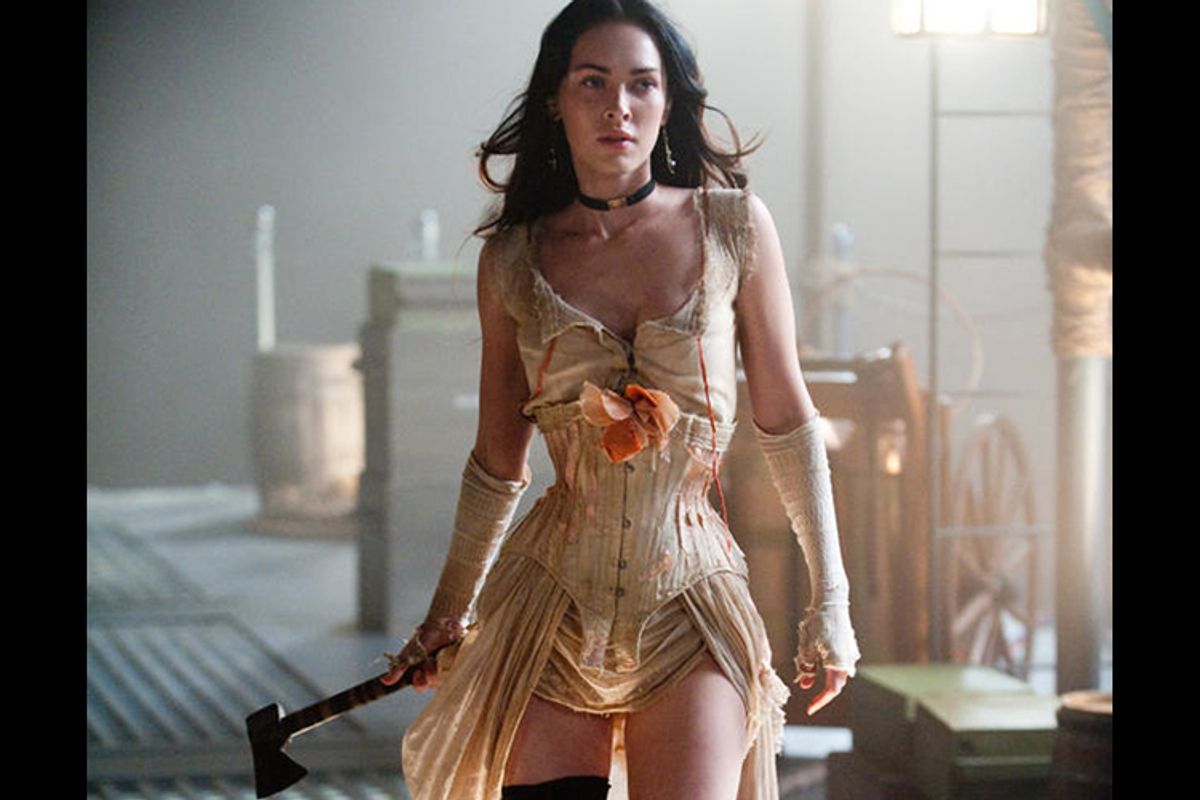 It's a challenge to take a comic-book adaptation that stars Josh Brolin, John Malkovich and Megan Fox and drain nearly all the fun out of it. "Jonah Hex" is one of those movies that combines a certain amount of being ridiculous on purpose with a great deal of pseudo-profound silliness. As the eponymous undead ex-Confederate drifter, Brolin has a grotesquely scarred face that makes him dribble whiskey like a toddler drinking cranapple juice, a hooker girlfriend (Fox) with a spray-on tan and an impressively corseted wasp waist, and an ability to reanimate the dead temporarily, mostly just to torture them.

Don't get me wrong; those are the good-silly things about "Jonah Hex." Director Jimmy Hayward, whose only previous film was the bastardized Hollywood version of Dr. Seuss' "Horton Hears a Who," turns the long-running DC Comics saga -- which began as the story of an Eastwood-esque Western loner, before venturing into quasi-spiritual weirdness -- into a complete stereotype of what movies made for the ADHD/gamer-addict population are like. (The screenplay was written by a two-man team that calls itself simply "Neveldine & Taylor," perhaps hoping that the next time they go up for a big movie gig they can claim to be the other guys named Neveldine and Taylor.)

Jonah's back-story, which involves his long-running blood feud with Quentin Turnbull, a rogue Confederate general played by Malkovich, is cut up and scattered throughout the movie in random recycled bits and pieces that might be memories and might be, I don't know, visions from hell. Meanwhile, the narrative's forward motion -- consider that entire phrase ironic -- is told in little staccato bursts, disconnected violent tableaux accompanied by yowling faux-metal guitar. It isn't just that no effort is expended on old-fogey ideas like character development; it's more that Hayward doesn't even try to make individual scenes make sense.

The movie goes like this: Jonah shows up someplace, apparently teleporting from Nevada mining camps to New Orleans to rural Georgia (journeys that would take weeks in the 1870s). He mutters incomprehensibly at someone out of the corner of his disfigured mouth and then starts shooting people with his Gatling gun, or his automatic crossbow, or his dynamite revolver. (OK, that one is kind of cool.) How-de-dow-de-dow, go the guitars.

Then he gets badly hurt, or pretty nearly kilt, and the Crow Indian medicine men, muttering "Not this guy again!" in their native tongue, have to dance around and chant and rub oregano on his wounds, causing Jonah to barf up an actual, living crow. (Get it? Get it? Oh, you're right, there's nothing to get.) Then it's back to sultry Megan in the New Orleans whorehouse, although all they do is smooch a little in artfully backlit shots, possibly because this is a PG-13 title and possibly because sexual intercourse might cause her to snap in half at that architecturally improbable 20-inch waist.

Malkovich, who seems to take pride in doing the best he can with silly roles in bad movies, is impressively lugubrious as Turnbull, a shaggy and deracinated Southern gentleman who prepares a mint julep while also preparing to launch a 19th-century precursor to the atom bomb. This whole story is a little bit the alternate-history genre known as steampunk and a little bit "Wild Wild West" -- but then, wasn't that TV series steampunk before there was a word for it? When Turnbull brands his initials on Jonah's face in a scene that I guess is meant to be terrifying, it's hard to suppress the giggles -- it appears that Jonah has become the property of Quentin Tarantino.

But this movie's set-pieces are so restrictive and meaningless that Malkovich doesn't really have much to do, and the same goes for Fox and even Brolin, who never gets beyond a tough-guy growl and a few wisecracks. Only Irish actor Michael Fassbender, playing a villainous lieutenant of Turnbull's who strongly resembles the Lucky Charms leprechaun, seems to be enjoying himself. Aidan Quinn plays President Ulysses S. Grant (is that random casting or what?), who in real life was too busy drinking and taking bribes to pay attention to anything else, but here fulfills the awkward role an old friend of mine calls Mr. Exposition. You know: "Turnbull has the weapon? You don't say! Where will he attack next? I want you to bring me Jonah Hex -- he was a hero once!"

If I had to guess, I'd speculate that "Jonah Hex" is barely 80 minutes long because Hayward came in with an unholy mess of incoherent footage, and this was as close as the editing team could come to something resembling a movie. On the other hand, Hayward and his producers may genuinely believe that, hey, this is what the kids want these days. Which might be even worse. I've seen stupider movies than "Jonah Hex" (arguably I've seen some this month), but fans of the comic book's spooky, dense melodrama deserve a lot better.