Ripping the populist mask off GOPBP

Did Barton's brain malfunction? Does Barbour know what "escrow" means? Why does Bachmann hate fishermen? Ask them 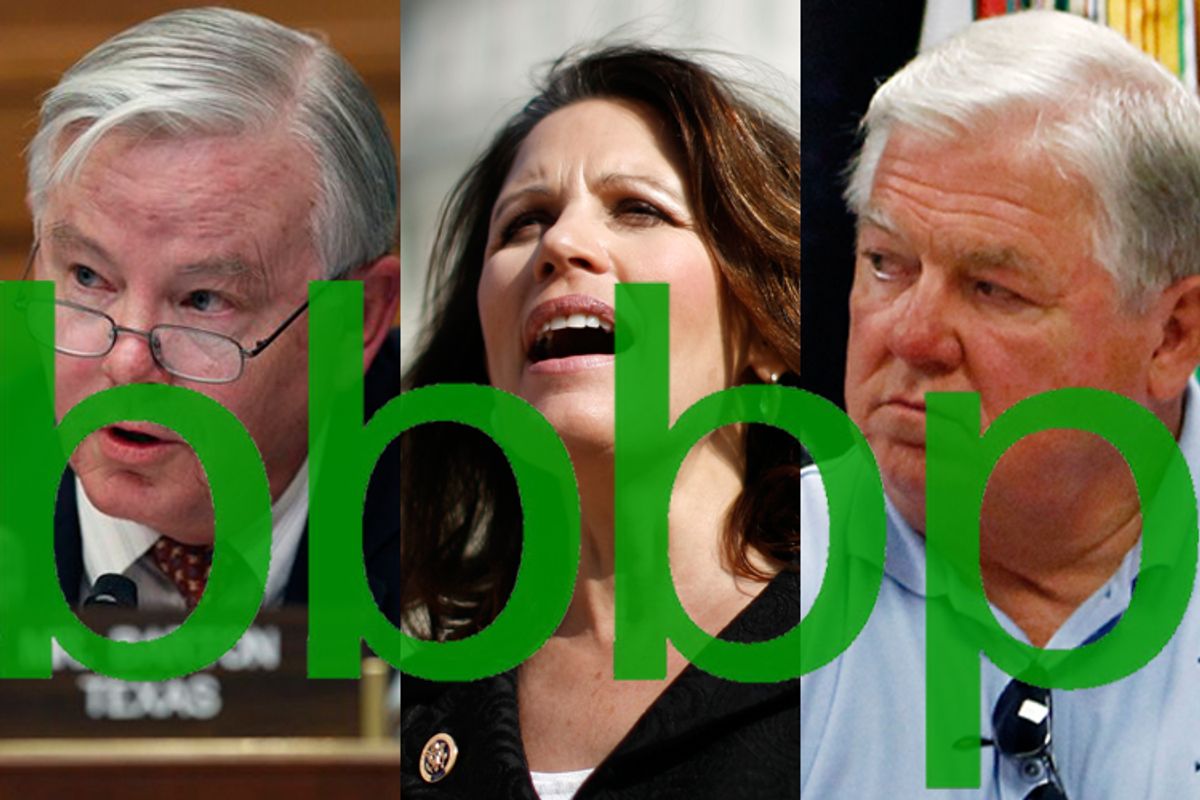 With their manic, absurd defenses of BP, certain leading Republicans (echoed by Fox News commentators) have achieved levels of self-parody far too exaggerated for a "Saturday Night Live" sketch. Everyone understands that politicians of both parties sometimes stooge for corporations. But Haley Barbour, Michele Bachmann and Joe Barton, among others, have said things about the British oil giant -- and the $20 billion escrow fund to compensate Deepwater Horizon damages -- that could only be uttered by someone truly stupid. Or someone who thinks the rest of us are truly stupid.

As a GOP representative from Texas, Barton should be expected to act like an oil industry rent-boy. That is his essential identity and purpose in life, and that is why he apologized to BP chairman Tony Hayward for the "shakedown" perpetrated against the company by President Obama. But there was no shakedown nor was there, as some conservatives have suggested, any violation of the corporation's constitutional rights. The president has no power to prevent BP from defending claims in court, nor can he prevent the Justice Department from indicting BP executives on criminal charges if sufficient evidence exists to do so. The establishment of the escrow fund was entirely voluntary, and indeed many observers believe that the decision to create it was motivated as much by self-interest and public relations as by compassion or guilt.

Haley Barbour too has behaved like an abject servant of the oil bidness for his entire public career -- and he has seen no reason to change just because an endless tide of sludge is washing up on the shores of the state he misgoverns. From the beginning of the disaster, Barbour has tried to minimize the effects of the spill and make excuses for BP, but he has outdone himself in a fit of indignation over the escrow fund. According to him, it will make full restitution to the Gulf's beleaguered workers, fishermen and business owners less likely, because it will reduce the profits BP needs to pay out damages. Of course, if $20 billion is already in escrow, then the injured parties need not worry about where the money will come from. But don't try to make sense of Barbour's argument, because you can't.

Then there is Bachmann, who represents a district in Minnesota and therefore cannot be excused for standing up on behalf of a regional economic interest. To her, the escrow fund represents a scheme for "redistribution" of wealth -- as if the people who will receive money from it are undeserving welfare recipients and as if BP had done nothing to injure them. She derided the BP executives who will pay into the escrow account as "chumps."

All of these ultra-free-market, regulation-and-bureaucracy-hating conservatives agree, by the way, that President Obama and the federal government are just as blameworthy as BP, Halliburton and the other corporations in charge of Deepwater Horizon -- because federal agencies didn't regulate them stringently enough. Regulation is very, very bad, except when Obama doesn't do enough of it.

Today Bachmann backed off those remarks a step, perhaps realizing that she sounded even sillier than usual, and assured CNN that, contrary to appearances, she isn't just a "shill" for BP. But it may be too late for her self-correction and the phony apology-for-his-apology issued by Barton today as well. Their blather has ripped away the fashionable Tea Party mask of populism, allowing us to see something much more familiar underneath, and it is something that most American voters will find repulsive.