"Hung": A parable for crass times

HBO's man-whore dramedy presents winners and losers alike, straining against the soul-sucking nature of the day 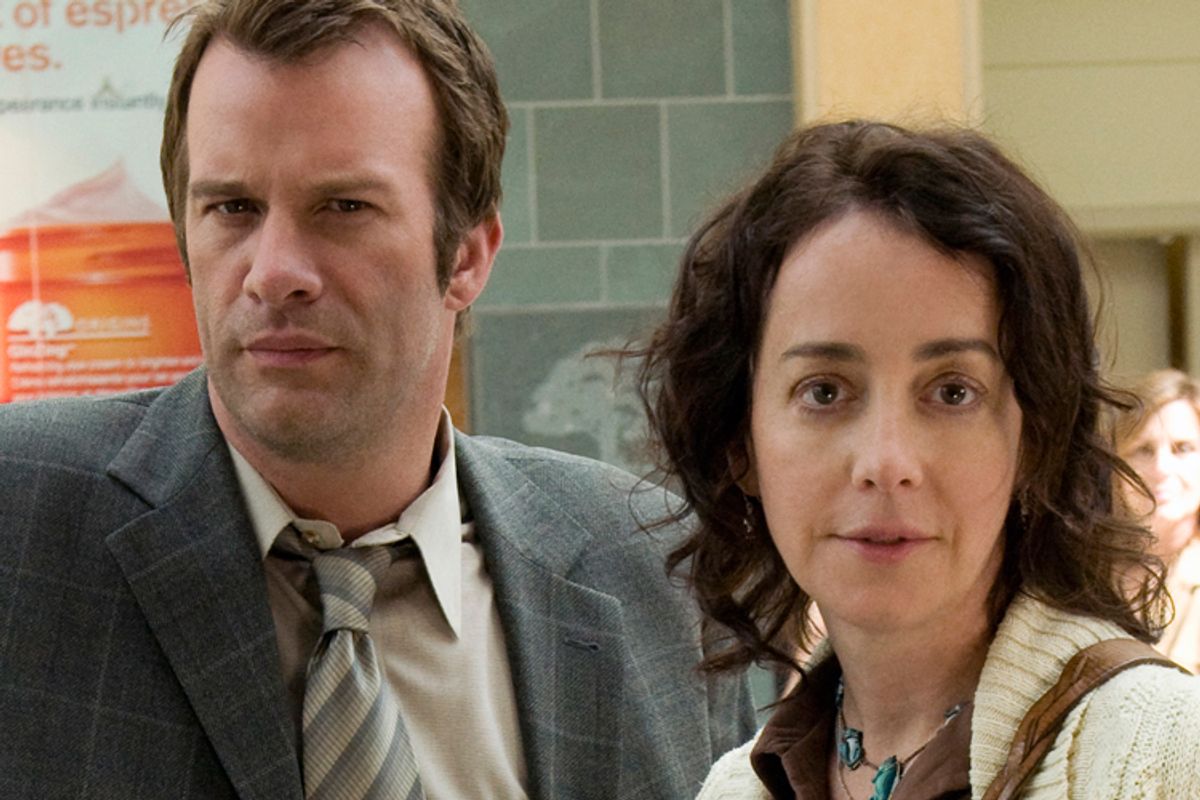 Winners often suffer from the delusion that they'll be winners forever. They imagine that victory is their birthright, that they'll effortlessly succeed at everything they try.

Eventually, though, reality catches up with them. Child stars grow up to be angry alcoholics. Captains of industry lose their fortunes. Rock stars overdose. Handsome Casanovas go bald and get dumped by their wives. Starlets age badly. Clowns lose their senses of humor. Old Labradors get bad hips.

So why do we ascribe so much power to those who happen to be winning at this very moment? That's just what losers do, I guess.

So what do you do about it? In Ray Drecker's (Thomas Jane) case, you use the gifts that God gave you (namely, the big penis He gave you) to seek your fortune. Performing sexually for total strangers, big and small, young and old, might work for a while – particularly for Ray, whose brain isn't crowded with neurotic thoughts or second-guessing or anything at all, really. But eventually, even a guy like Ray looks around and, like some modern version of John Updike's Rabbit Angstrom, asks himself, Wasn't I a winner once? How did I wind up in a hotel room, doing the deed with a big bossy woman who says I'm "almost as good" as her vibrator?

"Hung" is one of that strange new breed of half-hour dramedies that can't decide if it's a comedy or a drama. Like the current best of its breed, Showtime's "United States of Tara," "Hung" clings closely to its premise (as opposed to love triangles ["Nurse Jackie"], farcical twists ["Weeds] or pretentious dummy outbursts ["Californication"]) as a means of sharpening its focus. Thus do we find Ray's pimp Tanya ("Jane Adams") pleading with her landlords, failing at her proofreading job, flailing at the pimp game, and then spewing angry words at a poetry slam, demonstrating in each colorful explosion of nerves and rage the frustration that comes from a lifetime of feeling like a loser.

Of course, lifelong winners don't necessarily have an easier row to hoe. Ray's ex-wife Jessica (Anne Heche) has landed the exact life she's always wanted -- big, pretty house, nice clothes, fawning husband -- only to find herself cringing and whining over this and that, constantly asking herself if her vague sense of dissatisfaction is some design flaw of her head, or a reflection of a larger problem with her choices. Just as she's starting to enter a state of emotional paralysis, here comes her squeaky, disempowered and roundly dislikable dermatologist husband, Ronnie (Eddie Jemison), who starts pressing her to have a baby at age 42. Even though his request comes out of the blue, she can't help wondering if she has a wifely duty to oblige him.

Jessica is also unnerved by her inability to connect with her two geeky teenage kids, Damon (Charlie Saxton) and Darby (Sianoa Smit-McPhee). When Darby joins a fat pride group at her high school, Jessica gamely tries to support her but only ends up embarrassing her simply by being her skinny, jittery, perpetual-popular-girl self as the big girls look on in disgust.

But this is the upside-down world that Jessica and Ray find themselves in at middle age: All of the traits that once made them special -- their looks, their easy sense of entitlement, their enthusiasm -- feel undervalued and outdated as they grow older.

Even their most heartfelt attempts at connecting with their kids fall flat. These two have never been forced to look at themselves very closely before, so, not surprisingly, they find that they're not very good at it. Every attempt at self-examination leads to utter confusion and bewilderment, the kind of unstable state that leads people to have affairs – or at least to redecorate the guest bathrooms. This is where we can only suspect Jessica's feelings will lead her, to a distraction big enough (an affair, a new Birkin bag or a baby?) that it'll provide relief from the uncertainty she's feeling.

And then there's Lenore (Rebecca Creskoff), Ray's co-pimp, the perfect embodiment of the kinds of sociopathic behaviors required to thrive in the modern rat race. Lenore has no morals, no loyalties, no driving passions, no principles, no honor, no conflicting impulses and absolutely no soul. She wants to live well without working hard, and she'll do whatever it takes to achieve that goal, even if it means sabotaging, manipulating and undercutting every human being in her path. Every time Tanya tries to call Lenore's bluff, Lenore one-ups her simply by demonstrating her complete lack of human-like traits. What does Lenore have up her sleeve next? Will she blackmail Ray? Will she steal Jessica's husband? She's the fox in the henhouse here, cooing sweetly to everyone but secretly planning some heinous act yet to be revealed.

Lenore is also the ultimate near-demonic foil in a story about earnest winners struggling with loss and earnest losers struggling to win. Through Lenore's calculated maneuvering, the petty shenanigans of the well-meaning mortals around her are revealed as nothing but useless flailing against an indifferent tide. The moral of this dark dramedy is revealed through Lenore, who, mark my words, will escape from any scale of calamity: When the system is inherently corrupt, only those who are corrupt enough to game the system will get a leg up.

Although at times "Hung" unravels and feels as lost as Ray Drecker himself, its individual scenes present as darkly funny and disturbing a parable of the disheartening state of American culture as you'll find on the small screen. When Ray tries to speak to his son, in stuttered tones, about the things they have in common despite all appearances, when Tanya stammers and stutters but still charms an expensive gift out of a potential client, when Jessica surveys her husband working in her backyard with a pitying glance, it conjures Rabbit Angstrom, expansive and overly confessional after a round of golf and beers with new friends, their fragile bonds already strained by his depressive non sequiturs. This is a comedy dominated by missed connections, by attempts at understanding that are unmet or thwarted, in which only the cynics with their eyes on the bottom line can whip up the illusion of happiness for themselves. "I always wanted to be a product," Ray says, but even he may not be empty enough to succeed at that goal.