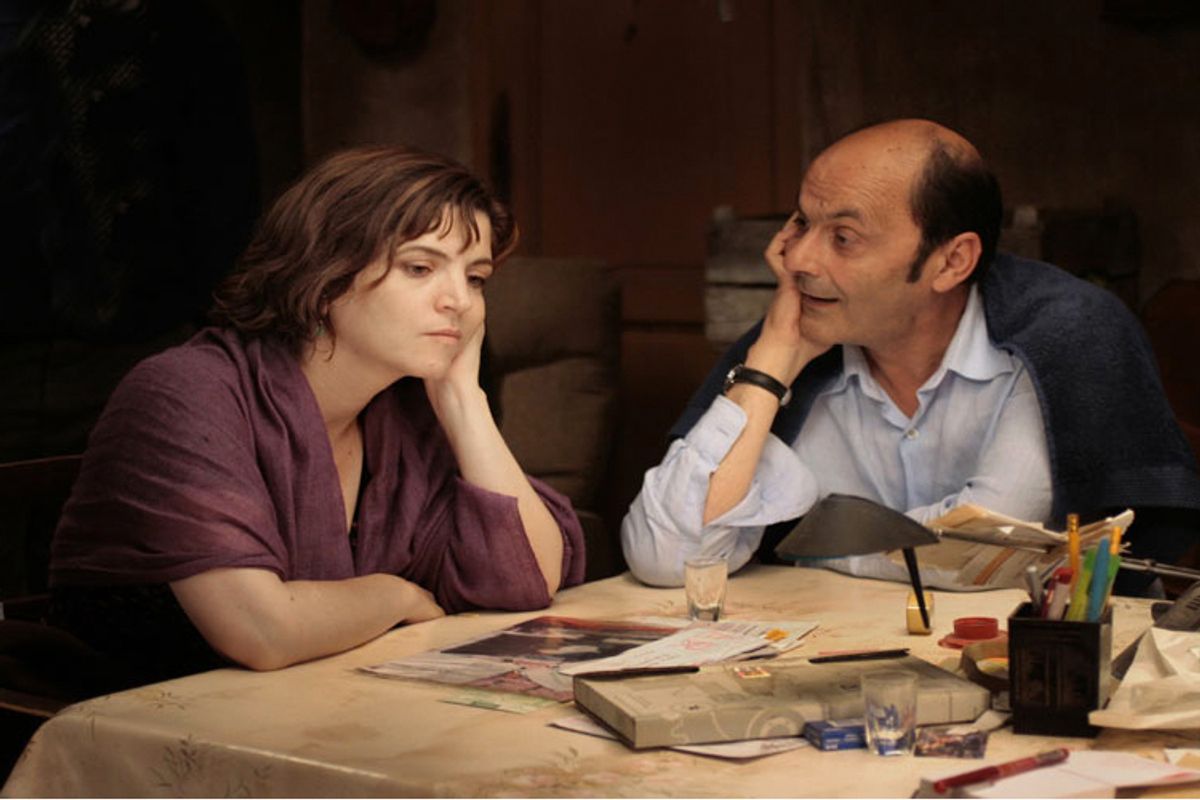 Agnès Jaoui and Jean-Pierre Bacri in "Let It Rain"
--

"Let It Rain," the new movie from French actress, writer, director and all-around Renaissance woman Agnès Jaoui, is one of those sharp-edged European comedies that doesn't seem to be about much of anything -- the marital unhappiness of a mixed group of middle-class characters, maybe -- but winds up being about almost everything. I suppose Jaoui's films bear a faint resemblance to the '80s work of Woody Allen (please stop screaming!), in the sense that they're partway between farce and social observation, and also because she appears in them and is willing to make herself look like an ass. (Her previous movies include "Look at Me" and the Oscar-nominated "Taste of Others.")

While it might not even wind up among the 10 best French films of the year, "Let It Rain" is assured and drily amusing, built around performances by Jaoui herself, as a tyrannical and self-centered Parisian feminist who's returned to her family home in the south of France, and Jean-Pierre Bacri (Jaoui's off-screen spouse and writing partner) as a would-be filmmaker and pompous provincial failure. There's a wonderful scene in which Jaoui's Agathe and Bacri's Michel get stoned together, because the documentary they're trying to make is falling apart, and they end up sitting on the ground giggling at an ant that's trying to carry a stick many times larger than itself.

Sure, you might see a scene something like that in an American film made by some young indie director, but it probably wouldn't have half the resonance: Agathe and Michel are adults in their 40s, coming face-to-face with their real-world failures. She's realizing that no one in her family actually likes her, including the longtime boyfriend she takes for granted, and that she's been shipped off to run an unwinnable political campaign in the name of gender-equity quotas. For all his affected erudition, Michel makes a living shooting weddings and baptisms, is estranged from his teenage son and is passionately in love with a married woman who won't leave her husband.

At the risk of being a tiresome Europhile, let me observe that nobody like Jaoui exists in American film. She's an attractive, average-size woman, neither beautiful nor plain, with a forceful personality and a sharp tongue. (Outside her film career, she's also an accomplished classical, folk and pop singer.) In "Let It Rain" she takes on such weighty topics as sexism, racism, adultery and long-buried family secrets, all in the guise of a carefully woven relationship comedy that's consistently light in tone and never judgmental.

Jaoui has a terrific supporting cast here, including the Arab-French actor Jamel Debbouze in a delicate performance as the dreamy, half-resentful son of Agathe's Algerian housekeeper and Pascale Arbillot as Agathe's passive and perpetually wounded sister (who is also Michel's lover). Provençal locations are attractively captured by cinematographer David Quesemand, and the overall result is a Euro-comedy that's light enough for summer consumption alongside an audacious little bottle of rosé, but a whole lot more rewarding than most of the season's fare.

"Let It Rain" is now playing at Lincoln Plaza Cinemas in New York, with more cities to follow, and is also available on-demand, via IFC In Theaters, on many cable-TV systems.