This Week in Crazy: Thomas Kinkade

His pastel dream world has become a lurid place of failed sobriety tests, bankruptcy and Winnie the Pooh abuse 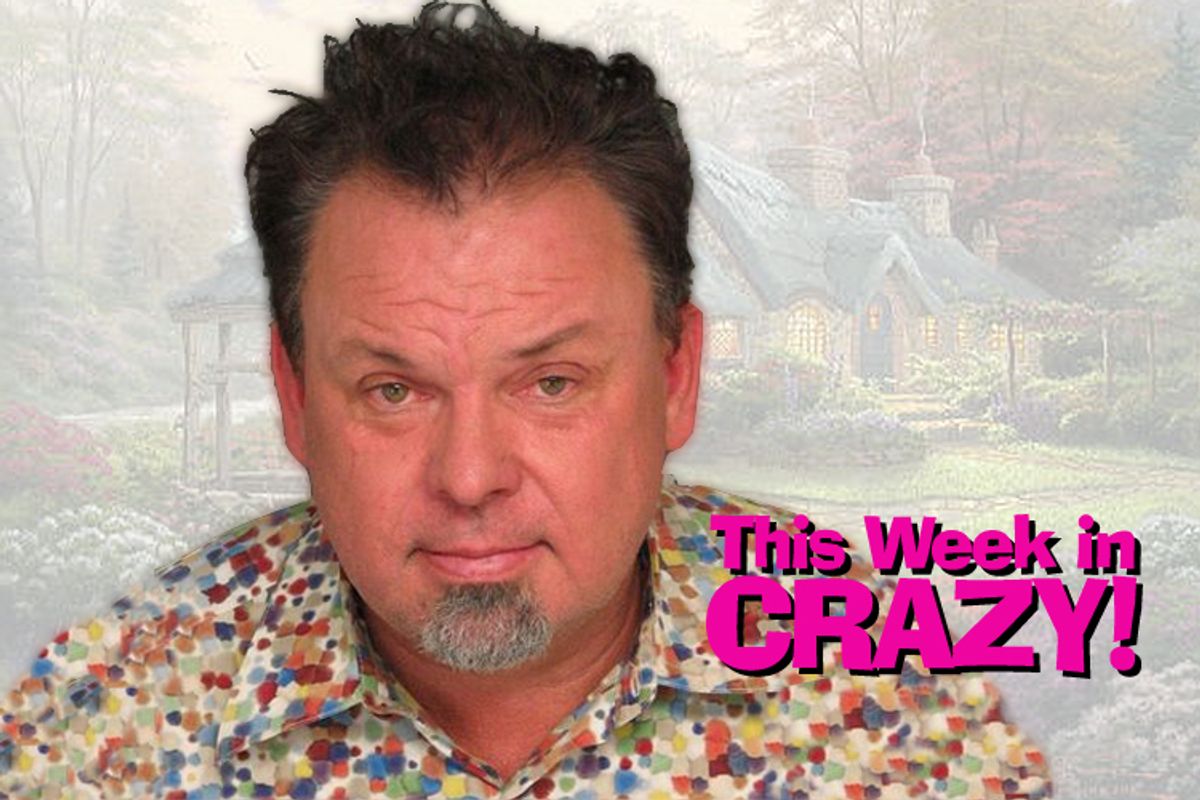 The Christmas cottages have dimmed their lights while millions of little azaleas droop their Pepto-pink heads. Thomas Kinkade, king of landscape kitsch and self-billed Painter of Light™, has fallen upon dark times.

When news broke this week that Kinkade, 52, was arrested on suspicion of drunk driving, it was only the latest stumble for this icon of saccharine religious sentiment. It's as if one of his wondrous Christmas sleighs zoomed right past the town gazebo and plowed into a crowd of cherub-cheeked carolers. (Which, were it a Kinkade painting, might be titled, "God's Littlest Martyrs.")

Just a few weeks ago, Kinkade's manufacturing arm filed for bankruptcy, claiming to owe creditors more than $6 million. This follows several years of bad news for Kinkade and his business, including million-dollar court rulings against him in favor of ex-Kinkade gallery owners, and reports of an FBI investigation into whether Kinkade's business systematically defrauded franchise owners, who claimed he "used the Christian hook" to dupe investors. (Picture an apple-faced couple solemnly handing over their life savings in an old-timey bank. Title: "Our Blessed Sacrifice.")

It was about this time, in 2006, when aggrieved ex-employees began testifying in court cases about Kinkade's odd, "Jekyll-and-Hyde" personal behavior, rivetingly documented by the Los Angeles Times. Once, Kinkade allegedly heckled Siegfried & Roy during a drunken binge in Las Vegas. "I think it was Roy or Siegfried or whatever had a codpiece in his leotards," one former Kinkade employee testified. "And so when the show started, Thom just started yelling, 'Codpiece, codpiece,' and had to be quieted by his mother and [wife] Nanette." (Picture our hero surrounded by menacing, Creamsicle-colored cats and two whip-wielding Spandex devils. Title: "Lion's Den.")

He allegedly flipped off a colleague's wife who tried to help him when he fell off a bar stool drunk, and "palmed" a woman's breast at a publicity event in Indiana while saying "these are great tits!" And then there was the time he supposedly relieved himself on a Winnie the Pooh statue in a Disney hotel in Anaheim, Calif., while saying, "This one's for you, Walt." (Imagine Ashdown Forest at daybreak, and Winnie is drenched from a spontaneous shower; Tigger, Eeyore flee in terror. Title: "Golden Moments.") When asked about this last story, Kinkade conceded in testimony that "there may have been some ritual territory marking going on, but I don't recall it."

Did he let his knack for cheap nostalgia fuel out-of-control delusions of grandeur and cultural domination? If so, there are a few mega-hawkers of cheap sentiment who may want to look at Kinkade as a cautionary tale. The sleigh ride is short, after all, from the "Christmas Cottage" to "The Christmas Sweater."

This Week In Crazy Thomas Kinkade