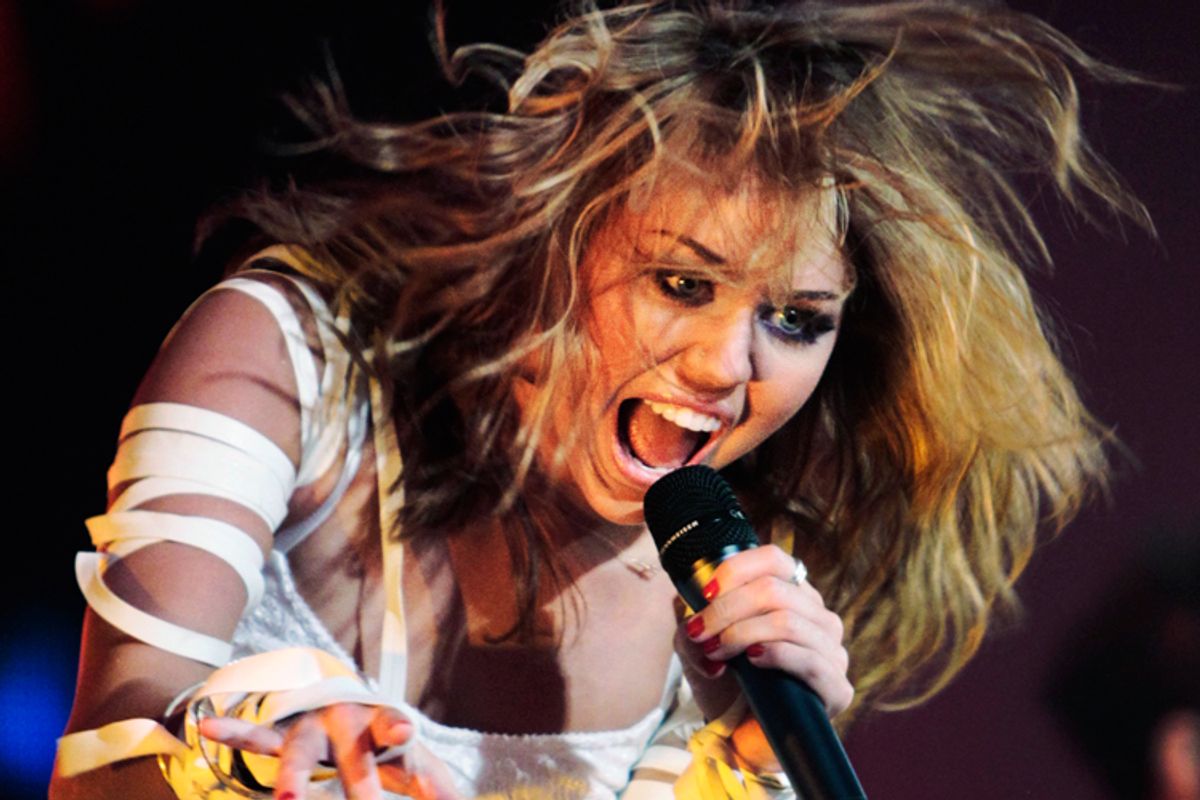 This just in -- Miley Cyrus still cannot be tamed. And she's starting to freak us out a little.

After turning into a sexy, glittery bird last month for her "Can't Be Tamed" video, she raised eyebrows with a clip of her rump shaking at a party, appeared to kiss a girl and, for the pièce de résistance, incited End of Times fretting after Perez Hilton posted a photo of the 17-year-old climbing out of a car, apparently underpants-free.

On Sunday, she continued her streak of commanding our attention while baffling the bejezus out of us with her performances at Toronto's MuchMusic Video Awards. First, there was a midriff-baring, booty rocking, strangely street cred-attempting rendering of "Party in the USA," wherein she and her troupe appeared to channel vintage Salt n' Pepa, replete with big earrings, bandannas and flannel.  Represent!

But in case you thought the performance was just a sweet "Yo! MTV Raps" throwback and not a weird moment in racial appropriation, her version of "I Can't Be Tamed" was even more of a head-scratcher.

Appearing in angelic pure white, Cyrus writhed around a tribe of the strangest bunch of face-painted dancers since that aboriginal ice-dancing routine at the Olympics.  There were bare feet. Torches. And lots of savage hair flipping. Her multiracial troupe tried to lock her up, to prod her with spears, even carry her off like a missionary on a spit. It was to no avail, of course, for she cannot be tamed.

It's a mash-up world, and if Katy Perry can collaborate with Snoop, why shouldn't the most famous teen in the world borrow a bit from other cultures too? And Cyrus may not be delving too deeply into the semiotics of her recent performances herself.

She's clearly trying to spread her impressive, expensive wings, and kudos to her for attempting new styles and her refusal to lip-sync.  But coming so soon after her other recent miscalculations, her MuchMusic performances have a vibe of a desperate, borderline insulting assumption that being "urban" or "tribal" makes one authentically badass. And maybe it's time for her to stop singing about Jay-Z and start working with him instead.