The Obama administration and its pundit-defenders

As the civil liberties abuses pile up, establishment Democrats demand that progressive criticism of Obama cease 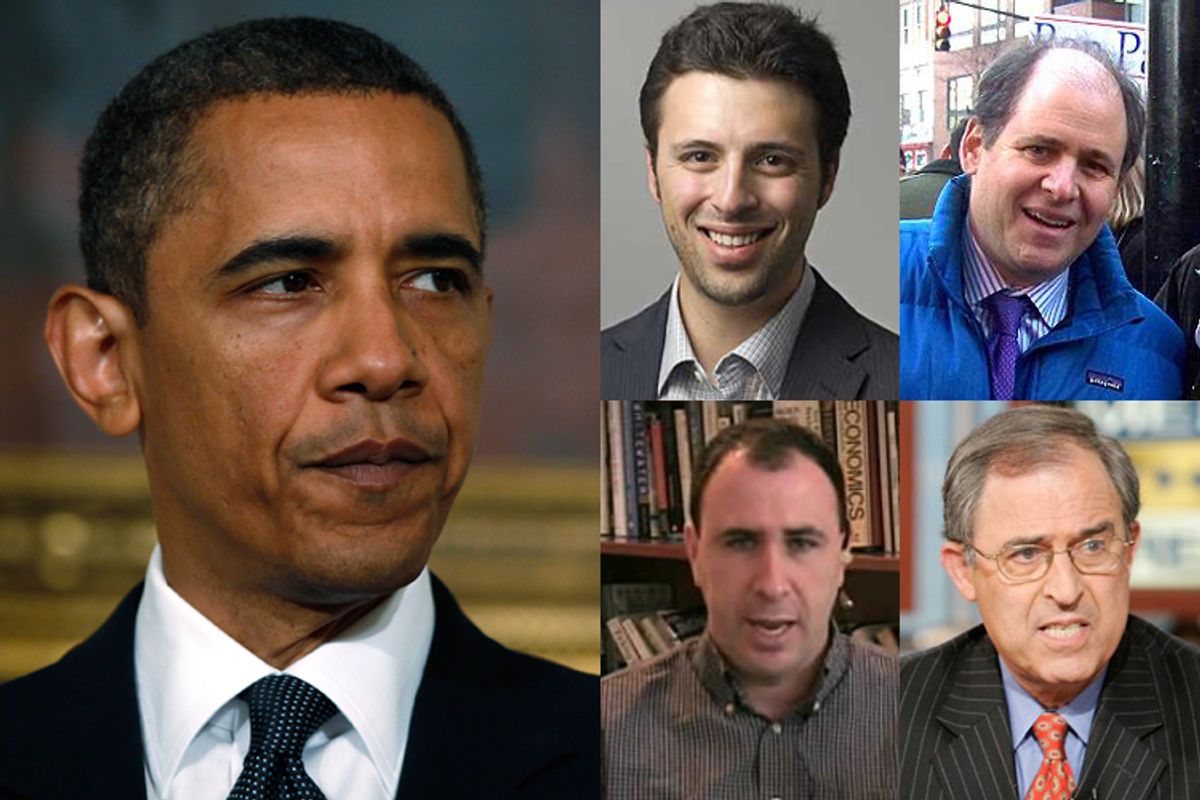 Even in the context of America's wretched civil liberties abuses over the last decade, the case of Mohamed Hassan Odaini stands out.  He was 17 years old in 2001 when his father sent him from Yemen to study at a religious university in Raiwand, Pakistan, and when a campus house in which he was staying there was raided by Pakistani authorities in early 2002, he was turned over to the U.S. and shipped to Guantanamo, where he has remained without charges for the last eight years (he's now 26).  A federal court this month granted his habeas petition for release, finding that the evidence "overwhelmingly supports Odaini's contention that he is unlawfully detained."  Worse, the court described the multiple times over the years -- beginning in 2002 and occurring as recently as 2009 -- when the U.S. Government itself concluded that Odaini was guilty of nothing, was mistakenly detained, and should be released (see here for the court's description of that history).

Despite that, the Obama administration has refused to release him for the past 16 months, and fought vehemently in this habeas proceeding to keep him imprisoned.  As the court put it, the Obama DOJ argued "vehemently" that there was evidence that Odaini was part of Al Qaeda.  In fact, the Obama administration knew this was false.  This Washington Post article this weekend quotes an "administration official" as saying:  "The bottom line is: We don't have anything on this kid."  But after Obama decreed in January that no Yemeni detainees would be released -- even completely innocent ones, and even though the Yemeni government wants their innocent prisoners returned -- Obama DOJ lawyers basically lied to the court by claiming there was substantial evidence to prove that Odaini was part of Al Qaeda even though they know that is false.  In other words, the Obama administration is knowingly imprisoning a completely innocent human being who has been kept in a cage in an island prison, thousands of miles from his home, for the last 8 years, since he's 18 years old, despite having done absolutely nothing wrong.

It really is hard to imagine many things worse, more criminal, than imprisoning people for years whom you know are innocent, while fighting in court to keep them imprisoned.  But that's exactly what the Obama administration is doing.  Every day that Odiani is kept in a cage is a serious crime.  Just imagine what has happened to his life by being shipped off to Guantanamo for 8 years, starting in 2002 during that camp's darkest days, with absolutely no justification.  As the court put it:

I honestly don't understand how any Obama DOJ lawyer or official could involve themselves with anything like this.  If you're willing to work to keep a person whom you know is innocent imprisoned, what aren't you willing to do?  What decent human being wouldn't be repulsed by this?  I don't care how many times someone chants "Pragmatism" or "The Long Game" or whatever other all-purpose justifying mantras have been marketed to venerate the current President; these are repellent acts that have no justification.

Of course, none of this is new for the Obama administration; it's consistent with their course of conduct from the start.  I highlight this today only because there is an obvious, concerted effort by a slew of Democratic Beltway pundits over the last month or so to attack the so-called "Left" for daring to express displeasure with the Obama administration, and to demonize those objections as unserious, shrill, irrational, purist and all the other clichés long used by this same cadre of party apparatchiks for the same purpose.  This is all coming from a homogeneous clique of Democratic Party pundits who have strikingly similar demographics and background, most of whom supported the Iraq War, and who spend a great deal of time talking to one another in public and private and reinforcing their talking point platitudes, and have spent years railing against the Left.  Just look at who is purporting to lecture liberals on how to promote progressive goals.

The New Republic's Jonathan Chait -- vocal Iraq War cheerleader (from a safe distance) who works for a magazine whose declared editorial mission is to have Joe Lieberman's worldview "once again guide the Democratic Party" -- has written yet another lecture chiding liberals for unfair and irrational discontent with his beloved leader.  Peter Connolly -- a D.C. lobbyist and telecom lawyer for Holland & Knight -- published a screed this weekend at The Huffington Post condemning progressives who are mounting primary challenges against conservative Democratic incumbents for creating a terribly unjustified "civil war" in the Democratic Party, which, after all, is led by what he called that "unabashed liberal" Barack Obama.  Newsweek's Jonathan Alter -- the first known mainstream pundit to explicitly call for torture in the wake of the 9/11 attack and one of the creepiest Obama loyalists around -- has been running around the country promoting his book by spouting "the typical warmed over Village sentiments, particularly as it relates to liberal critics of the President."

Lanny Davis published a column this weekend arguing that "the Left" is a threat to good Democratic principles and that Obama should "Sister Souljah" progressives who are criticizing him.  The New York Times' conservative columnist Ross Douthat even adopts their script today by pronouncing liberal disenchantment with Obama to be "bizarrely disproportionate" and grounded in unrealistic expectations of Obama.  And a whole slew of other, similar Obama-defending Democratic Party loyalists (Jon Chait, Ezra Klein, Jonathan Bernstein) -- for whom the excuses of "not-enough-time-yet" and "Pragmatism" are now dry wells -- have together invented a new one:  none of this is Obama's fault because the Presidency is so weak and powerless (though Klein, to his credit, accurately acknowledges that that excuse is "less true on foreign policy than on domestic policy").

So the homogeneous Party loyalists who cheered for Bush's invasion of Iraq, who spend their time privately railing together against those misguided liberal critics, have all magically come forward in unison, with the same script, to decree that The Left's discontent with the President is so terribly shrill, unrealistic, unfair, and unSerious.  The same trite pundits who reflexively ingest and advocate whatever the political establishment spits out are announcing that criticisms of the President are so unfair.  Jon Chait, Jon Bernstein, Jon Alter, Lanny Davis, Peter Connolly, Ross Douthat and friends know what good Progressives must do -- with their track record, who could possibly disagree? -- and that's be grateful for the President we have and to refrain from all this chattering, irrational, purist negativity.  Meanwhile, the administration does one thing after the next along the lines of what it's doing to Mohamed Hassan Odaini, rendering these You-Leftists-are-so-UnSerious sermons no more impressive or worthwhile than when the same unfailingly wrong establishment spokespeople, driven by exactly the same mentality, were spouting them back in 2003.

UPDATE:  For a classic expression of the Unserious-Liberals-Must-Stop-Criticizing-Obama mindset, see this TPM post from Theda Skocpal last week, arguing that "liberal pundits [on MSNBC and The Huffington Post] are making absolute fools of themselves bashing Obama over the Gulf spill" and decreeing that "Liberals right now should not be joining in Obama bashing on the oil spill."  That's because "If liberals do not support Obama and the Democrats for the next two election cycles, a rabid Right will be back in control" (h/t doosra).

Democratic apparatchiks now use the Scary Spectre of Sarah Palin the way GOP apparatchiks long used The Terrorist:  you better stay in line and not dissent or else that scary right-wing/Terrorist monster hiding under your bed will get you!  Apparently, we're all supposed to just smile and remain silent no matter what the U.S. Government does -- imprison innocent people, target citizens for assassinations, serve the corporate factions that own the Congress -- lest the Democratic Party be politically weakened by debate, dissent, and critiques (just like we were all supposed to smile and remain silent lest the U.S. and the Bush Presidency be weakened by debate, dissent, and critiques [and that refusal of Republicans to criticize their leader from 2001-2008, due to Party loyalty, worked out so very well for them, didn't it?]).  Apparently, our overarching duty as citizens is to work to strengthen the Democratic Party leadership, no matter what it does.

As Atrios said about the Skocpal/TPM post:  "It seems we have Very Serious People on the Left too."  What's odd is that liberal blogs once existed -- one could say they even emerged -- in order to combat this mentality.  Along with the establishment media, the capitulating, principle-free Democratic establishment (and its Shut-up-you-Unserious-Childish-Purist-Leftists mentality) was long the prime target of the liberal blogospheric critique.  Yet now, that mentality is often spewed (rather than opposed) by many liberal blogs, as though what the world needed to be a Better Place was an Amplifying Mechanism for The New Republic, the DNC, and the DLC.

UPDATE II:  The Guardian reports that WikiLeaks founder Julian Assange has "surfaced" in Brussels in order to address a conference of European parliamentarians on the issue of free information, but says that though he does not "fear for his life," he has been advised by his lawyers to stay away from the U.S.  How revealing that Assange apparently feels free to travel the entire Western World -- other than the U.S.  But we probably should avoid discussing what that does reveal lest we weaken the Democratic Party.

UPDATE III:  My response to Jonathan Chait's reply is here.