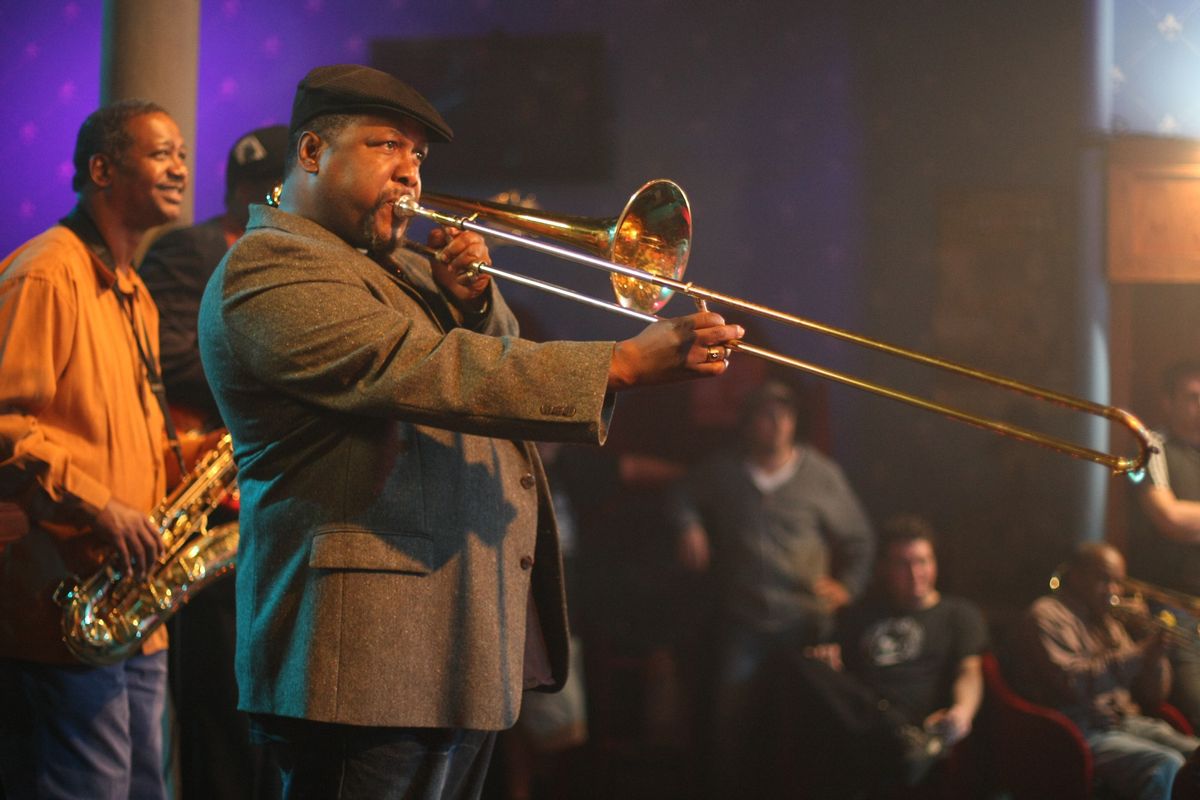 [WARNING: Spoilers from the first season finale of "Treme" below – don't read this if you haven't watched the finale yet.]

"Would you rather have a strong economy or a four-hour lunch?" This is Davis McAlary (Steve Zahn) imploring Janette (Kim Dickens) to stay in New Orleans instead of leaving for New York, but his words reflect the patient, sensual spirit of HBO's "Treme," a four-hour lunch of a drama series if there ever was one. All season we've been treated to episodes that center on live music, great food, second-line parades, ambling along at a pace best described as audaciously relaxed. But while such bold choices made David Simon's "The Wire" an outright masterpiece, "Treme's" relentless effort to capture the "real" New Orleans sometimes sinks viewers into an blurry fog of dark, packed dive bars and crowded late-night parties, only to jolt them out of their blues-chord-induced trance with another awkward scene where this or that character smilingly greets this or that famous face and trades mutually flattering banter.

Such extended experimentation with the rich, conflicting flavors of New Orleans often pushes this meandering story along, but other times it seems to rob the plot of its momentum and emotional weight. In Sunday night's finale, by the time Sonny (Michiel Huisman) and Annie (Lucia Micarelli) finally split, Ladonna (Khandi Alexander) buried her brother Daymo (Daryl Williams) and Albert (Clarke Peters) put on his enormous headdress and took to the streets, it was hard not to feel that we were made to wait too long for these resolutions, most of which played out exactly as we expected them to.

But then, the plot of "Treme" always feels like a thin, shaky line connecting a handful of dramatic, visceral moments to each other. In last night's episode, the big payoff scene came when Ladonna finally buried her brother. She and her mother looked crushed for most of the funeral, but then a transformation took place when Ladonna joined in the funeral parade. Slowly, the camera captures this bittersweet moment when she gets a little half-smile on her face and puts a little swing into her step – God bless Khandi Alexander, pulling off such a difficult emotional transition so smoothly and beautifully! That little snapshot of Ladonna's heartbreaking trajectory was the five-beignet finish to the kind of four-hour lunch that makes you say, "Screw the economy, I'm gonna go take a nap."

And with scenes that evocative and unforgettable, you can't exactly begrudge "Treme" its unique perspective and pace. Unlike almost every other finely-tuned, carefully calibrated dramatic entertainment on the small screen, this show isn't a tightly plotted engine that's designed to meet audience expectations and feed us witty one-liners and toss out appetizing glimpses of the next twist or turn up ahead. You have to admire David Simon and Eric Overmyer's utter indifference to serving up the typical narrative arc. Hell, even the big flashback to Katrina's approach at the end of Sunday's finale didn't reveal much: Sonny and Annie were in love once. Davis had contempt for his neighbors and rode out the storm in his house. Daymo forgot his cell phone, drove somewhere and was pulled over, just like the cop told Toni Bernette (Melissa Leo) earlier this season. But the big point of that flashback wasn't to add new understanding or to reveal how Daymo got the injuries that killed him; it was simply there to remind us of how much the storm unraveled these lives, to demonstrate how happy-go-lucky and resilient these characters were before this calamity chipped away at their sanity.

Nonetheless, we may have required a flashback or two in the second-to-last episode last week to understand how Creighton Bernette (John Goodman) could enjoy a few extra-rich meals, savor a final Marlboro red, then slip off the ferry to his death. This being Creighton, of course we were offered a wordy explanation beforehand. "The ending of the book is not the end," he tells his students at Tulane, most of whom look like extras from "The Hills" who ate a few handfuls of barbiturates before they showed up for class. "A rejection of disappointment and failure. She's not moving toward the darkness. She's embracing spiritual liberation."

Presumably Creighton is doing the same thing as he strolls around town, taking in the sights, savoring a few long lunches, breathing in the glories of New Orleans with all of his senses. But then, he ends it all? Yes, we've seen him grimacing at his computer screen for weeks. He can't write. He's hiding it from his family. Yes, he's been deeply depressed in the wake of Katrina. Nothing is the same for him since the storm. But he still loves eating great food and listening to great music and smoking strong cigarettes – and he's willing to erase all of that? Even if the man is depressed and suffering from post-traumatic stress disorder – which so many New Orleans residents were after the hurricane -- even if he's a romantic who's particularly enamored of spiritual liberation in the form of an early exit, I still have a hard time seeing him choosing to suck in saltwater instead of doubling back and getting another bag of beignets.

But I may be projecting my own preference for doughnuts over death. Suicides were way up in the wake of Katrina, plenty of them pretty unexpected, including people from all walks of life from filmmakers to pediatricians -- professionals with families whom you'd assume would patch their lives together and gather some sense of the big picture eventually. But suicidal ideation is common in the wake of a major trauma, and as tough as it is to believe that Creighton, a man of principles who, if anything, expects far too much of the world and holds everyone to an impossibly high standard, would ditch his wife and daughter without an explanation, throwing his premature departure into this picture is both true to the actual events in New Orleans and it makes some artistic sense. The character who served as the enraged Greek chorus of this story finally lost hope and became the tragic hero. Ask a veteran of Iraq, a victim of Katrina or a survivor of 9/11 (or a psychologist who's treated them): catastrophic events crush people's spirits, sometimes irreparably.

Realistic or not, Creighton was always a tough character to care about. All of that grimacing in front of his computer was certainly relatable, but it didn't stop me from groaning every time he self-pityingly tore up page after page. That's just another day at the office to most writers, and if we all slipped overboard the second we got into a deep, dark funk over our latest writer's block – well, there'd be a lot less crappy books crowding the shelves, at the very least. Call it self-hatred, but I'd prefer that "Treme's" big suicide come from some social worker or doctor who couldn't handle the despair he'd seen any longer, instead of coming from a guy who ambled around in an egoistic haze most of the time.

Of course, making your audience love a depressed, firmly middle class white writer whose most famous prose is "fuck you, you fucking fucks" isn't exactly the easiest task under the sun. "Treme" is much better at whipping up love for New Orleans – which it did yet again in the finale. This time it was Davis and Janette relishing the sights, the sounds, the smells of the city, then laying down for a nap by the water. The citizens of New Orleans sure are good at wandering around eating and drinking and listening to music all day.

But don't they ever get heartburn? Don't they ever grow bored of blues progressions? And can we keep living vicariously, episode after episode? Ultimately, many viewers would probably prefer some combination of a two-hour lunch and a reasonably good economy. But that's not how these characters operate. From Davis abruptly abandoning his run for city council, all for a favor from a prominent judge (or "get out of jail free card" as he refers to the man's business card) to Janette struggling to cook food outdoors in the rain to Anna playing violin for strangers and Toni throwing all of her energy into helping victims of Katrina, these are passionate people, people who love this dysfunctional, sensual wonderland of earthly delights.

Nonetheless, at the end of the first season, we know New Orleans much better than most of the show's characters. Albert remained stubborn and engaged in very little dialogue given his screen time. Antoine meandered about with or without his horn, his baby, his girlfriend, his lovers. He made a few big gestures – a friendship with the Japanese jazz tourist, a brand new horn for his teacher, a stack of cash for his ex-wife to bury her brother – but otherwise, he just hung out, played some gigs, did his thing. Same thing with Davis, Toni, even Creighton. Sewing feathers and hanging out in clubs and staring at computer screens is all well and good, but an audience needs more than that to stay invested.

"There are so many beautiful moments here," Davis told Janette in the second-to-last episode of the season.

"They're just moments," Janette replied. "They're not a life."

The first season of "Treme" featured so many sprawling, impressionistic, affecting moments, but it wasn't a complete story. Yes, this drama is well worth the time and the effort, but by Sunday night's finale things were getting a little repetitive. Nonetheless, I'd bet good money that in its second season, "Treme" starts to reach its potential, with more concrete, smartly plotted stories around which to hang all of this music and emotional upheaval. And once some solid story structure is in the mix here, watch out. It might take time to string together a bunch of memorable moments into a life, but when it finally happens, the results are truly breathtaking.