In another action-packed episode, we also get the immortal line: "You mean the werewolves weren't really Nazis?" 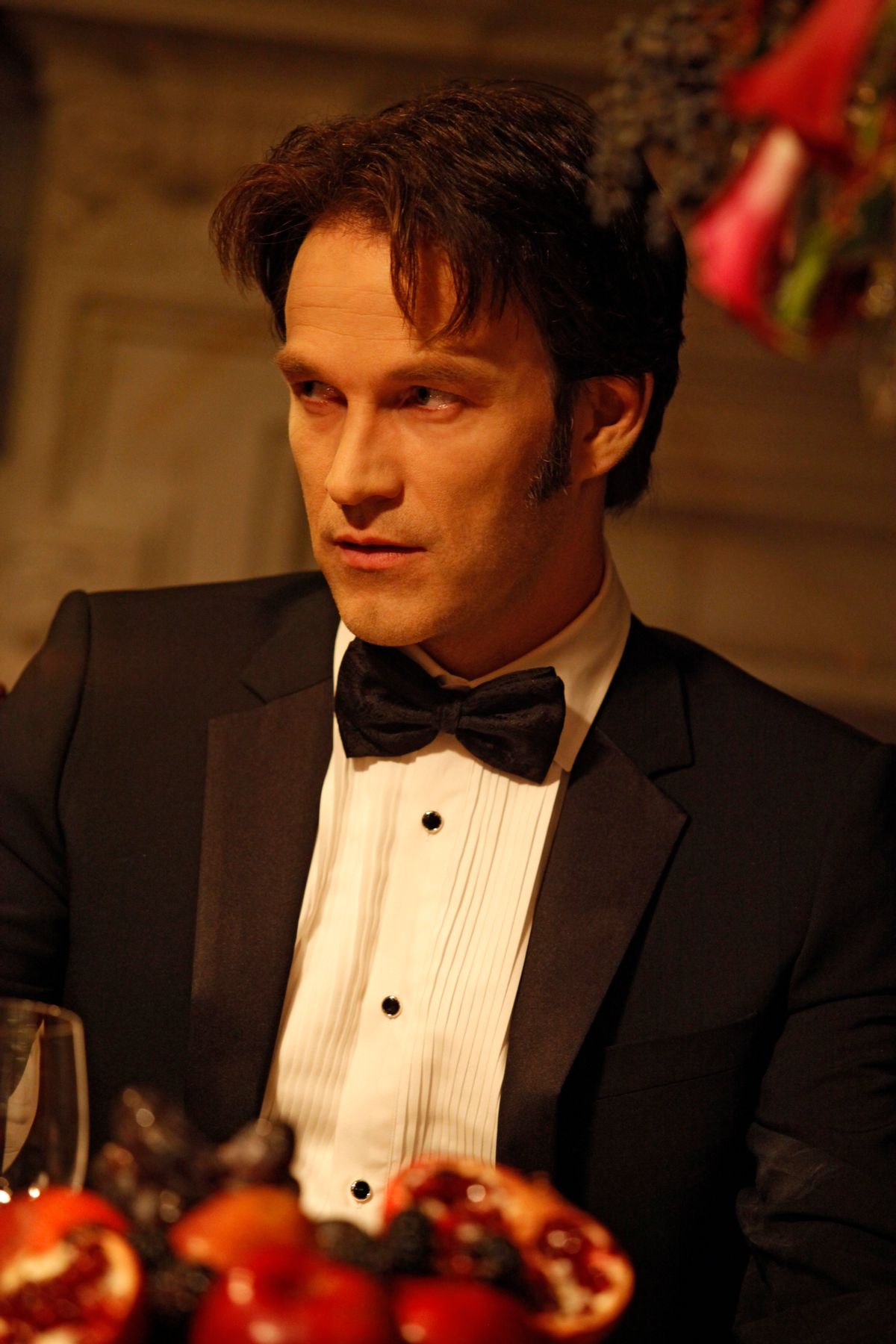 So here we are back where we left off, with Vampire Bill and the werewolves. Except that Bill has managed to get the upper hand. Or rather the upper paw. Literally. He throws the dismembered paw to the ground. He's ripped three of the werewolves apart with his mouth, but he looks a little like a kid who has Alphaghetti all over his chin.

The Vampire King of Mississippi rides up in hunting pinks. What! The werewolves are under his command? He's so disappointed in how they've treated Bill. He shoots the second to last werewolf and then reveals the remaining one's humiliating nickname! Cooter! Oh how Bill laughs! These werewolves, they are so childlike. Clearly Bill doesn't realize he still has that messy meal chin.

But this petulant schoolyard rapport between Bill and Cooter sets up the theme of this episode: wounded, angry children.

This is what happens when parents abandon their children physically or emotionally:

The children grow up bitter and vulnerable, never having learned how to change quickly from a dog into an owl should they find themselves about to be hit by a Mack truck (Sam). Or they walk away from true love (Jessica) and when they have to dismember the trucker they accidentally killed and hid in the basement, they have no idea how expensive chainsaws are!

Or they end up suicidally depressed, grieving the accidental death of their zombie serial killer boyfriend (Tara). Or they must walk the world for an entire two episodes dressed like a bedazzled pirate cheerleader with this belted, bias cut,  yellow football jersey that makes their butt look bigger than J-Lo's (Lafayette. Is he going through some kind of post traumatic fashion syndrome?)

"Life is suffering," Lafayette reminds Tara, on the way to visit the nasty, cold, grinch-hearted woman in the hospital who is apparently his mother. True. But it's nice to know you can still rent chainsaws.

The vampires also seem a little lost. Bill, because he actually was lost in the woods until he is found by the King and invited to dinner with the King's authentically French male companion (yes, he really is French, not just another serial killer with a fake accent. I'm from Montreal, I can tell).

But ever since Eric lost Godric, he seems to be using Sookie as some kind of emotional substitute, even while he pretends to be all Viking-ish. "Don't cry" he says to her. "It makes me feels disturbingly human."

For some reason feeling disturbingly human makes Eric flashback to that time he and Godric were posing as German SS but were really hunting Nazi werewolves. Good times. (Which in case you hadn't noticed is bon temps in French.)

"Nazi werewolves?" you ask. (Because you don't care about French. I get it.) Yes, I wondered about that too, until I saw the above faux vintage documentary.

Eric tries explaining this all to Sookie, but it starts getting confusing. Sookie utters the best B-movie mash up line ever: "You mean the werewolves weren't really Nazis?"

No! The whole time the vampires were posing as SS, the werewolves weren't Nazis either! I'm not sure I totally follow this, but as Eric explains, the werewolves are a highly organized ancient secret society that is actually funded by vampires. If I understand correctly, Eric and Godric thought they were hunting Nazi werewolves but they were really hunting something closer to Rosicrucian werewolves.

Whatever you say Eric. I invite you in. In fact, you've been welcome over anytime since you got that great haircut. But I get that you have to focus on getting into Sookie's house right now, if only because there is a scary man with vintage pointy boots looking through Sookie's pictures.

Meanwhile, over at the Vampire King's house, Bill is enjoying a lovely blood bisque, after the citrus flavored "cruelty free" blood drink. In the background a string quartet does a cover of Santana's "Evil Ways." The King reveals his plan to marry the Louisiana Vampire Queen, and to make Bill the sheriff of the entire district of Mississippi.

Bill does not look as thrilled as the King would like. Perhaps because the rest of his eternal life is flashing before his eyes and he's seeing himself playing a lot of Yahtzee. Also by now he's starting to get glimmers of this whole vampire-funded werewolf society. Tempers begin to flare.

At the bar, a stranger enters. Intriguing British accent. Pale. Orders a bottle of True Blood. Tara grudgingly gives him a cold one (the microwave's broken). Mysterious British Vampire seems to be bonding with Tara. Oh, the wounded children, will they ever develop good people instincts? Obviously not, because the camera pans down and, he has POINTY BOOTS.

Later Tara will discover a couple  of rednecks playfully pissing on the spot in the parking lot where the "serial killing nigger" was shot (accidentally by Jason, although everyone still thinks it's Andy. But it is nice to see those two get along now.)  Tara loses it, and luckily Vampire Pointy Boots shows up to save her. He holds down one of the rednecks while Tara beats him to a pulp. Vampire Pointy Boots is clearly smitten.

But back at the King's house, Vampire Bill is not. Guess who's coming to dinner. Lorena! And guess who's getting a kerosene lamp thrown at her until she turns into a great big ball of fiery renounced maker?

There will be no mystical blue flamey Godric type ending for Lorena. I know 140-year-old relationships are hard to end. But something tells me Eric would have handled this a lot more maturely. Maybe Sookie could learn something from an older vampire with an extra millennium of experience with women.

Ah, but then there'd be no gap-toothed fanged babies.

Nevertheless, for now, it’s a good thing Eric's there and Sookie does eventually invite him in. Because guess what's in her house. Hint: Something furry. Not really a Nazi.

Next week:  Jason meets another one of the half hippie chicks with glowing skin that always get him into so much trouble. And hopefully Nazis playing Yahtzee!