Who cares about McChrystal's comments?

The uproar over the general's remarks is absurd; his actual record in Afghanistan is far more troubling 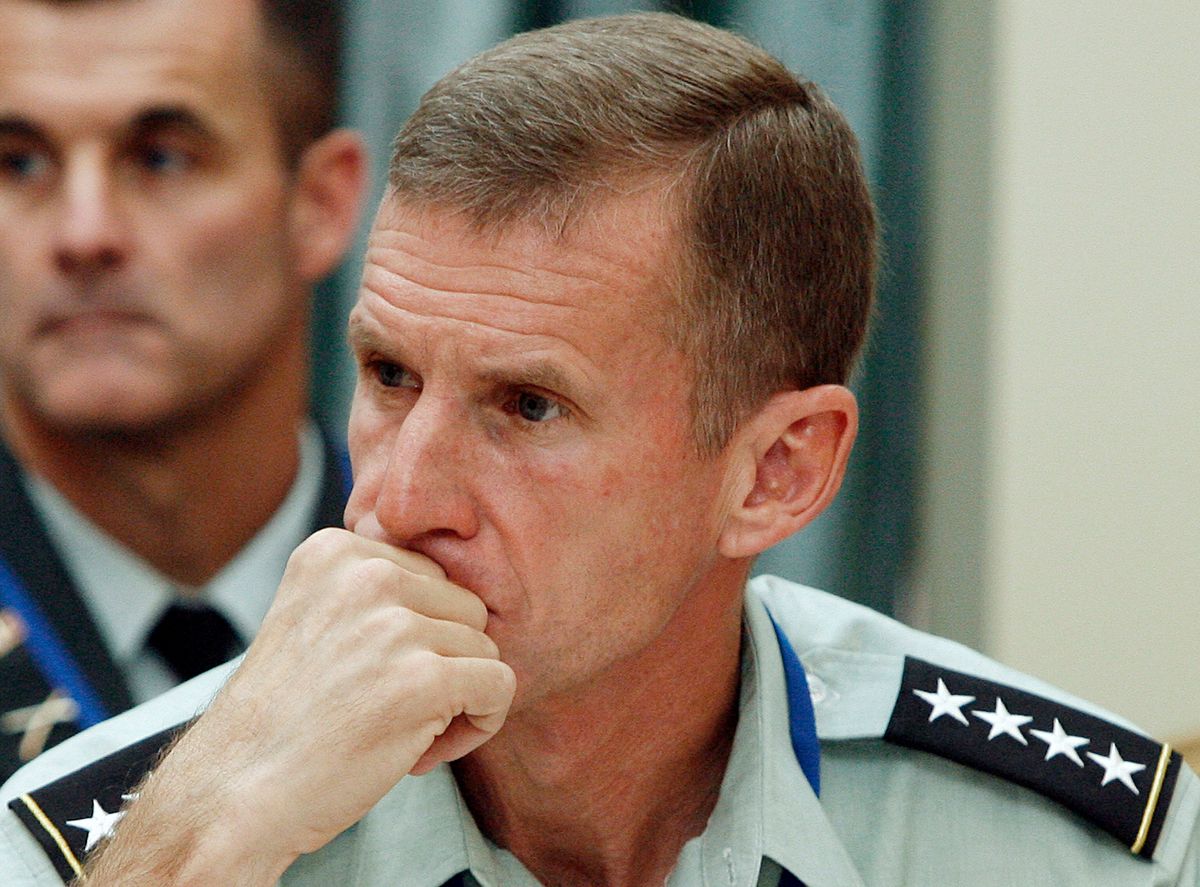 The scandal du jour in Washington surrounds a Rolling Stone article, "The Runaway General," in which Gen. Stanley McChrystal and his staff say a few less-than-respectful things about President Barack Obama, Vice President Joe Biden, and the administration's Afghanistan team.

A quick sample of the comments:

[McChrystal] and his staff imagine the general dismissing the vice president with a good one-liner.

"Are you asking about Vice President Biden?" McChrystal says with a laugh. "Who's that?"

The general first encountered Obama a week after he took office, when the president met with a dozen senior military officials in a room at the Pentagon known as the Tank. According to sources familiar with the meeting, McChrystal thought Obama looked "uncomfortable and intimidated" by the roomful of military brass. Their first one-on-one meeting took place in the Oval Office four months later, after McChrystal got the Afghanistan job, and it didn't go much better. "It was a 10-minute photo op," says an adviser to McChrystal. "Obama clearly didn't know anything about him, who he was. Here's the guy who's going to run his fucking war, but he didn't seem very engaged. The Boss was pretty disappointed."

In private, Team McChrystal likes to talk shit about many of Obama's top people on the diplomatic side. One aide calls Jim Jones, a retired four-star general and veteran of the Cold War, a "clown" who remains "stuck in 1985."

McChrystal reserves special skepticism for Holbrooke, the official in charge of reintegrating the Taliban. "The Boss says he's like a wounded animal," says a member of the general's team. "Holbrooke keeps hearing rumors that he's going to get fired, so that makes him dangerous. He's a brilliant guy, but he just comes in, pulls on a lever, whatever he can grasp onto. But this is COIN [counterinsurgency], and you can't just have someone yanking on shit."

At one point on his trip to Paris, McChrystal checks his BlackBerry. "Oh, not another e-mail from Holbrooke," he groans. "I don't even want to open it." He clicks on the message and reads the salutation out loud, then stuffs the BlackBerry back in his pocket, not bothering to conceal his annoyance.

"Make sure you don't get any of that on your leg," an aide jokes, referring to the e-mail.

The only person who escapes criticism, it seems, is Secretary of State Hillary Clinton, who "had Stan's back during the strategic review," according to an aide.

This, really, is the theme of the piece: McChrystal likes people who don't question him; he's annoyed by those who do. It's certainly an awkward position to be in, if you're not, say, the president of the United States, but the piece does a very good job of also showing that McChrystal has gotten his way for years and years.

I can understand why the White House feels a need to show the president is worked up about this, but I think it's absolutely ridiculous that they're calling McChrystal back to Washington for an Oval Office lecture over the few thin lines of off-the-cuff disrespect witnessed here. Are there really still presidents (and vice-presidents) who believe they are loved and feared completely on the fields of war? Are there really that many diplomats in Washington who have such fragile feelings that they must vent their displeasure in person, removing a general from the theater of war, to feel their honor has been adequately satisfied?

The real shame of this scandal is that it will yet again overshadow the actual war-related parts of the piece. People might get interested in a general making a joke out of the vice-president, but how many will read on and absorb the greater message of the piece: Gen. McChrystal and his cursing, drinking staff of "killers, spies, geniuses, patriots, political operators and outright maniacs" aren't aiming for victory in Afghanistan anymore:

Even those who support McChrystal and his strategy of counterinsurgency know that whatever the general manages to accomplish in Afghanistan, it's going to look more like Vietnam than Desert Storm. "It's not going to look like a win, smell like a win or taste like a win," says Maj. Gen. Bill Mayville, who serves as chief of operations for McChrystal. "This is going to end in an argument."

McChrystal is a general who's had the support of two presidents, now, and who has survived a number of scandals (the article points to the coverup of the cause of Pat Tillman's death and the human rights abuses at the prison at Camp Nama) that should have killed the career of anyone else. It's hard to believe that a man so friendly with the media and the Pentagon, who has already received statements of support from Hamid Karzai and John Kerry, won't weather this storm.

Should he? Eh. Generals criticizing diplomats isn't exactly a fly-home offense. Yeah, it showed bad judgment to bad-mouth the vice-president to a magazine reporter, I'll give you that -- but McChrystal's biggest mistakes have had nothing to do with mouthing off to a reporter, and it's insulting to believe that he could be canned for a matter of perception rather than action. Watch the civilian casualty rate increase dramatically, and you get to stay on the ground; watch your troops try to clumsily cover up killing two pregnant women, and you get to stay in country; insult the vice-president with a lame high school pun, though, and you'd better high-tail it home for a lecture.