Why worry about the ecological and economic implications of the spill when you can talk about who it helps for '12? 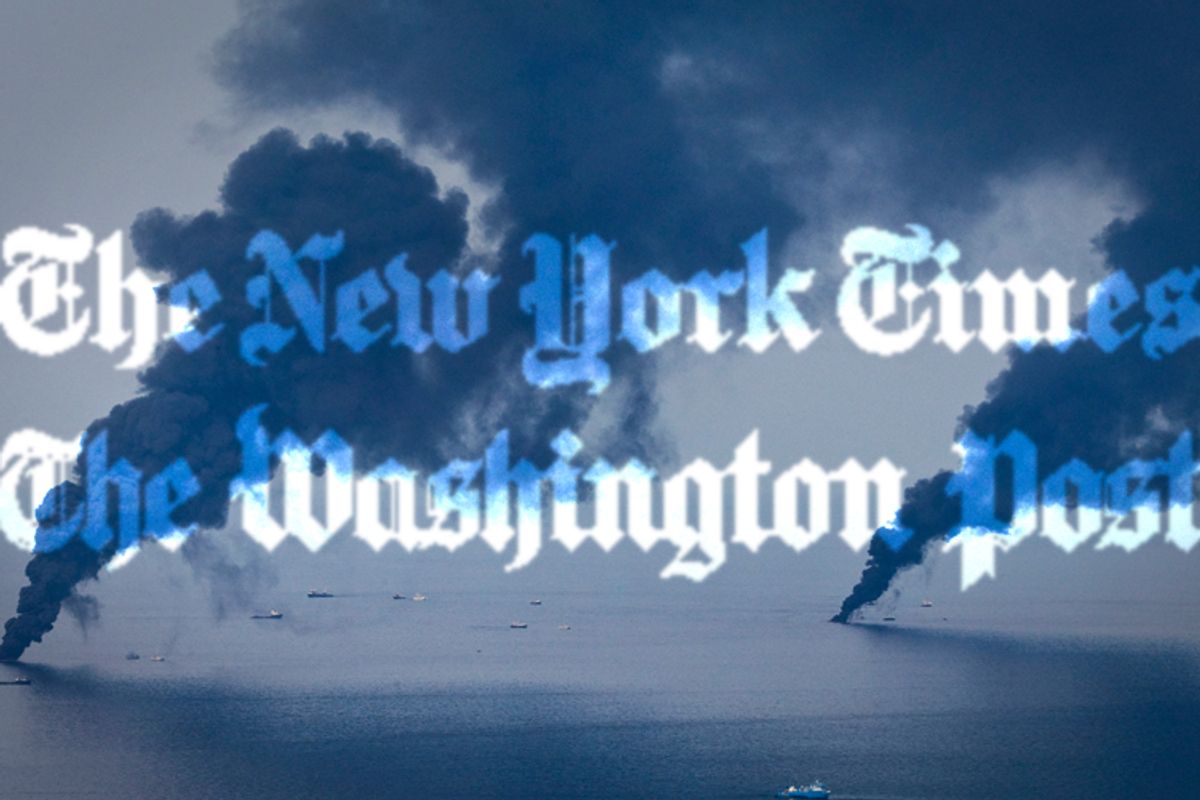 The BP oil spill has been an unmitigated disaster ecologically and economically, but at least one species has proven resilient and adaptive enough to flourish even in the blighted waters of the Gulf Coast: the Washington campaign narrative.

Example A: An article from Monday's Washington Post titled “Turning the corner on the Gulf oil spill?” Perhaps I’m not the only one who felt a glimmer of hope after reading that headline. Perhaps we had turned the corner! Maybe the worst of this whole disaster was behind us. Who knows, maybe top kill actually works!

No such luck. As the lede makes abundantly clear, Post reporter Michael Shear doesn’t mean to imply that the real, corporeal ecological catastrophe has turned the corner; rather, he’s referring to the non-corporeal, mostly hypothetical conversation about the ecological disaster.

Shear’s article is, in fact, nothing more than the latest specimen in a long-running Washington tradition of reducing every issue and event to an abstract campaign issue, and analyzing its impact solely in the context of approval ratings and the mostly nonsensical concept of “political capital.” The oil spill may wreak more long-term devastation on New Orleans than Hurricane Katrina did, but why focus on such frippery when David Axelrod is in very real danger of being embarrassed on a Sunday morning talk show?

The Post, of course, is not the only major news outlet that trivializes national tragedies by turning them into horse race stories. To name just one other example, the Gray Lady is on it too: on Sunday, the New York Times ran a story on Mississippi Gov. Haley Barbour’s reaction to the spill, noting his black knight-style attempts to downplay the gravity of the situation, and concluding from this that -- wait for it -- he’s a contender for the 2012 Republican nomination for president.

That seems to be as far as Mark Leibovich and his colleagues at the Times are willing to pursue the issue. Never mind whether Barbour is correct when he suggests that the orange color of the oil off the coast of Mississippi somehow indicates that it’s not so big a deal; the big story here is how this affects his political chances two years from now.

If either of these two stories sounds familiar, it's because any casual follower of the news has heard some permutation of them a hundred thousand times before. In fact, the contours of these narratives get rehashed so frequently, that one cannot help wondering what the point of reading a Times or Post story is in the first place -- why not just skim it for a couple of  paragraphs' worth of factual content and then write your own article about how this affects the political future of politician X?

The fact that it is so easy to do -- so easy, in fact, that you barely need to think at all -- is reason enough for so many journalists to keep doing it so many times over. Jay Rosen and Julian Sanchez have produced some insightful material of late about the ideology of the Washington press, and if you take this ideology to be a sort of secular religion -- as all non-theistic dogmas wind up being -- then the horse race narrative is the pious parable that, within the confines of this faith, is the only tale worth telling. Think of how Flannery O’Connor wrote basically the same Catholicism-tinged story of struggling toward grace over and over again, although these articles lack her poetry, insight into human nature, and semblance of any kind of original thought.

I’m not unsympathetic to the plight of Shear, Leibovich and other reporters who produce dreck like this on a daily basis; many of them are writing on tight deadlines about issues that they know very little about. The campaign narrative is safe territory, something that cannot be fact-checked or rebutted. But to reduce every reported piece to this journalism-by-madlibs approach is to ignore the massive responsibilities that come along with being a member of the profession. A colossal disaster has occurred, and a small group of people has been tasked with informing the American people about it as a full-time job. Thus far, that task has been taken far too lightly.