Cause and effect in the War on Terror

The Times Square bomber pleads guilty -- and provides more evidence of the link between U.S. policy and terrorism 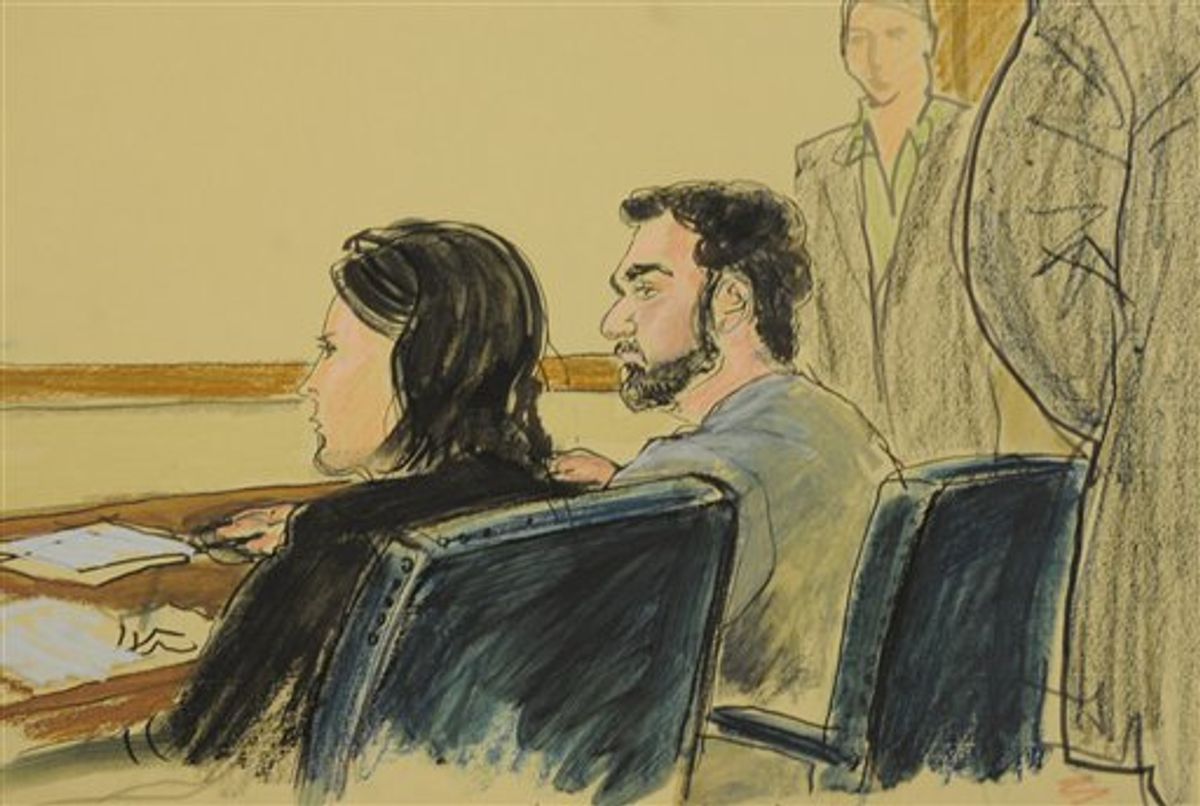 In this courtroom sketch, defendant Faisal Shahzad sits with assistant public defender Julia Gatto, left, during his arraignment in federal court in New York on Tuesday, May 18, 2010, in New York. The suspect in a botched car bombing in Times Square did not enter a plea to five felony charges against him. (AP Photo/Elizabeth Williams) (AP)
--

American discussions about what causes Terrorists to do what they do are typically conducted by ignoring the Terrorist's explanation for why he does what he does.  Yesterday, Faisal Shahzad pleaded guilty in a New York federal court to attempting to detonate a car bomb in Times Square, and this Pakistani-American Muslim explained why he transformed from a financial analyst living a law-abiding, middle-class American life into a Terrorist:

If the United States does not get out of Iraq, Afghanistan and other countries controlled by Muslims, he said, "we will be attacking U.S.," adding that Americans "only care about their people, but they don't care about the people elsewhere in the world when they die" . . . .

As soon as he was taken into custody May 3 at John F. Kennedy International Airport, onboard a flight to Dubai, the Pakistani-born Shahzad told agents that he was motivated by opposition to U.S. policy in the Muslim world, officials said.

"One of the first things he said was, 'How would you feel if people attacked the United States? You are attacking a sovereign Pakistan'," said one law enforcement official, who spoke on condition of anonymity because the interrogation reports are not public. "In the first two hours, he was talking about his desire to strike a blow against the United States for the cause."

When the federal Judge presiding over his case asked him why he would be willing to kill civilians who have nothing to do with those actions, he replied:  "Well, the people select the government. We consider them all the same" (the same rationale used to justify the punishment of the people of Gaza for electing Hamas).  When the Judge interrupted him to ask whether that includes children who might have been killed by the bomb he planted and whether he first looked around to see if there were children nearby, Shahzad replied:

I am part of the answer to the U.S. terrorizing the Muslim nations and the Muslim people.  And, on behalf of that, I'm avenging the attack.  Living in the United States, Americans only care about their own people, but they don't care about the people elsewhere in the world when they die.

Those statements are consistent with a decade's worth of emails and other private communications from Shahzad, as he railed with increasing fury against the wars in Afghanistan and Iraq, drone attacks, Israeli violence against Palestinians and Muslims generally, Guantanamo and torture, and asked:  "Can you tell me a way to save the oppressed? And a way to fight back when rockets are fired at us and Muslim blood flows?"

This proves only what it proves.  The issue here is causation, not justification.   The great contradiction of American foreign policy is that the very actions endlessly rationalized as necessary for combating Terrorism -- invading, occupying and bombing other countries, limitless interference in the Muslim world, unconditional support for Israeli aggression, vast civil liberties abridgments such as torture, renditions, due-process-free imprisonments -- are the very actions that fuel the anti-American hatred which, as the U.S. Government itself has long recognized, is what causes, fuels and exacerbates the Terrorism we're ostensibly attempting to address.

It's really quite simple:  if we continue to bring violence to that part of the world, then that part of the world -- and those who sympathize with it -- will continue to want to bring violence to the U.S.  Al Qaeda certainly recognizes that this is the case, as reflected in the statement it issued earlier this week citing the war in Afghanistan and support for Israel as its prime grievances against the U.S.  Whether that's what actually motivates that group's leaders is not the issue.  They are citing those policies because they know that those grievances resonate for many Muslims, who are willing to support radical groups and support or engage in violence only because they see it as retaliation or vengeance for the violence which the U.S. is continuously perpetrating in the Muslim world (speaking of which:  this week, WikiLeaks will release numerous classified documents relating to a U.S. air strike in Garani, Afghanistan that killed scores of civilians last year, while new documents reveal that substantial amounts of U.S. spending in Afghanistan end up in the hands of corrupt warlords and Taliban commanders).  Clearly, there are other factors (such as religious fanaticism) that drive some people to Terrorism, but for many, it is a causal reaction to what they perceive as unjust violence being brought to them by the United States.

Given all this, it should be anything but surprising that, as a new Pew poll reveals, there is a substantial drop in public support for both U.S. policies and Barack Obama personally in the Muslim world.  In many Muslim countries, perceptions of the U.S. -- which improved significantly upon Obama's election -- have now plummeted back to Bush-era levels, while Obama's personal approval ratings, while still substantially higher than Bush's, are also declining, in some cases precipitously.  As Pew put it:

Roughly one year since Obama's Cairo address, America's image shows few signs of improving in the Muslim world, where opposition to key elements of U.S. foreign policy remains pervasive and many continue to perceive the U.S. as a potential military threat to their countries.

Gosh, where would they get that idea from?  People generally don't like it when their countries are invaded, bombed and occupied, when they're detained without charges by a foreign power, when their internal politics are manipulated, when they see images of dead women and children as the result of remote-controlled robots from the sky.  Some of them, after a breaking point is reached, get angry enough where they not only want to return the violence, but are willing to sacrifice their own lives to do so (just as was true for many Americans who enlisted after the one-day 9/11 attack).  It's one thing to argue that we should continue to do these things for geopolitical gain even it means incurring Terrorist attacks (and the endless civil liberties abridgments they engender); as amoral as that is, at least that's a cogent thought.  But to pretend that Terrorism simply occurs in a vacuum, that it's mystifying why it happens, that it has nothing to do with U.S. actions in the Muslim world, requires intense self-delusion.  How much more evidence is needed for that?

Three other brief points illustrated by this Shahzad conviction:  (1) yet again, civilian courts -- i.e., real courts -- provide far swifter and more certain punishment for Terrorists than do newly concocted military commissions; (2) Shahzad's proclamation that he is a "Muslim soldier" fighting a "war" illustrates -- yet again -- that the way to fulfill the wishes of Terrorists (and promote their agenda) is to put them before a military commission or indefinitely detain them on the ground that they are "enemy combatants," thus glorifying them as warriors rather than mere criminals (see this transcript of a federal judge denying shoe bomber Richard Reid's deepest request to be treated as a "warrior" rather than a common criminal); and (3) the Supreme Court's horrendous decision yesterday upholding the "material support" statute is, as David Cole explains, one of the most severe abridgments of First Amendment freedoms the Court has sanctified in a long time; this decision was justified by the need for courts to defer to executive and legislative branch determinations regarding "war," proving once again that as long as this so-called "war" continues as a "war," the abridgments on our core liberties will be as limitless as they are inevitable.  At some point, we might want to factor that in to the cost-benefit analysis of our state of perpetual war (for more on yesterday's Supreme Court ruling, see my podcast discussion from February with Shane Kadidal of the Center for Constitutional Rights, counsel to the plaintiffs in this case, on the day the Court heard Oral Argument, regarding the issues that case entailed).