Why did Gen. McChrystal talk to Rolling Stone?

The Afghanistan commander thought he was already in a media war, and he just wanted his side out there 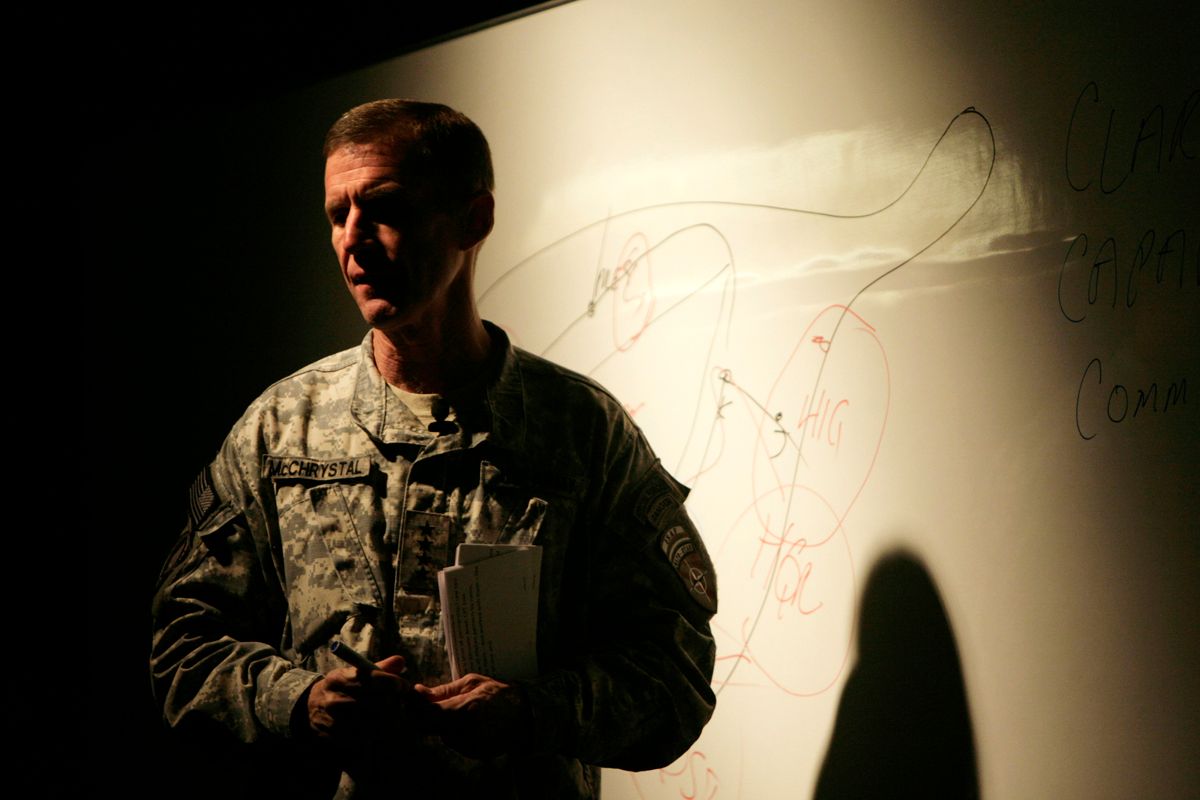 The top U.S. and NATO commander in Afghanistan, General Stanley McChrystal speaks to the military at US base Kandahar Airfield, Kandahar, Afghanistan, December 2, 2009. The first of 30,000 new U.S. troops will arrive in Afghanistan in two to three weeks, top U.S. officials said on Wednesday, even as they made clear plans to start bringing the soldiers home in 18 months could slip. REUTERS/Mustafa Quraishi/Pool (AFGHANISTAN CONFLICT MILITARY POLITICS) (Â© Pool New / Reuters)
--

Why did Gen. Stanley McChrystal give his full cooperation to a freelance reporter writing for Rolling Stone, exactly? He's not particularly "media savvy," we are told, but "media savvy" is not actually what stops most generals from openly insulting the White House. What stops them is "common sense" and "the Uniform Code of Military Justice."

Marc Ambinder says McChrystal just wanted to get his side of what he already saw as a media war out there.

Support for the Afghanistan war is dropping, both in the public and in the political elite, and support for an expansion would probably be nonexistent. A lot of soldiers don't entirely understand or agree with McChrystal's low-civilian-casualty counterinsurgency strategy. McChrystal apparently thought he was just getting a platform to make the case for his strategy, and to push the message that with more time (and maybe more resources) he'd succeed in his mission.

Finally, how did this fiasco with Rolling Stone magazine happen? Field commanders and their staff officers talk to the media in order to get their stories out. In the case of McChrystal and the Afghanistan campaign, the need to do so has lately been even more urgent than usual. McChrystal and his staff were seeking to "add time to the Washington clock." They hoped to get their message out to media audience segments that would soon be putting the most pressure on the Obama administration to terminate the campaign. The theory was that delivering their message -- through a channel like Rolling Stone -- would short-circuit, at least for a time, growing political pressure against the war.

But instead he just opened up to an antiwar reporter who actually printed all the incredibly stupid things McChrystal and his asshole aides said about their bosses.

The civilian Pentagon consultant responsible for setting up the interview has already resigned. Because, as Politico notes, it's weird that this interview was ever set up to begin with:

And as a freelance reporter, Hastings would be considered a bigger risk to be given unfettered access, compared with a beat reporter, who would not risk burning bridges by publishing many of McChrystal's remarks.

(That's right -- you can trust beat reporters to not report things their highly placed sources tell them. That's today's lesson in How Things Work.)

Is McChrystal justified in his dissatisfaction? Was he right to attempt to open up a front in the media war over the real war?

Considering that the only chance for any sort of "success" in Afghanistan revolves around building up their institutions and providing support for a functioning government that actually provides services -- as opposed to just killing all the "bad guys" until there are no more "bad guys" left -- it seems counterproductive to amplify the complaints of the "he won't let us raze enough villages" crowd. While Eikenberry is right that Karzai is feckless and untrustworthy, he's also the only Afghanistan leader we have.

But the story presents a counterinsurgency expert general who got literally everything he wanted from an initially (and understandably) reluctant White House, and who is still childishly peeved that anyone in the civilian leadership ever had doubts to begin with.

I still think McChrystal doesn't get fired, but plenty of people who know more about these sorts of things than I do disagree.

And now the pile-on is beginning: Mary Tillman, the mother of slain NFLer and Army Ranger Pat Tillman, sent a letter warning Obama that McChrystal couldn't be trusted, according to an anonymous interviewer, who sent the recording to Ben Smith. McChrystal's role in the coverup of Tillman's death by friendly fire was definitely known at the time of his appointment to Afghanistan, but it was, mostly, ignored in Congress and in the press.