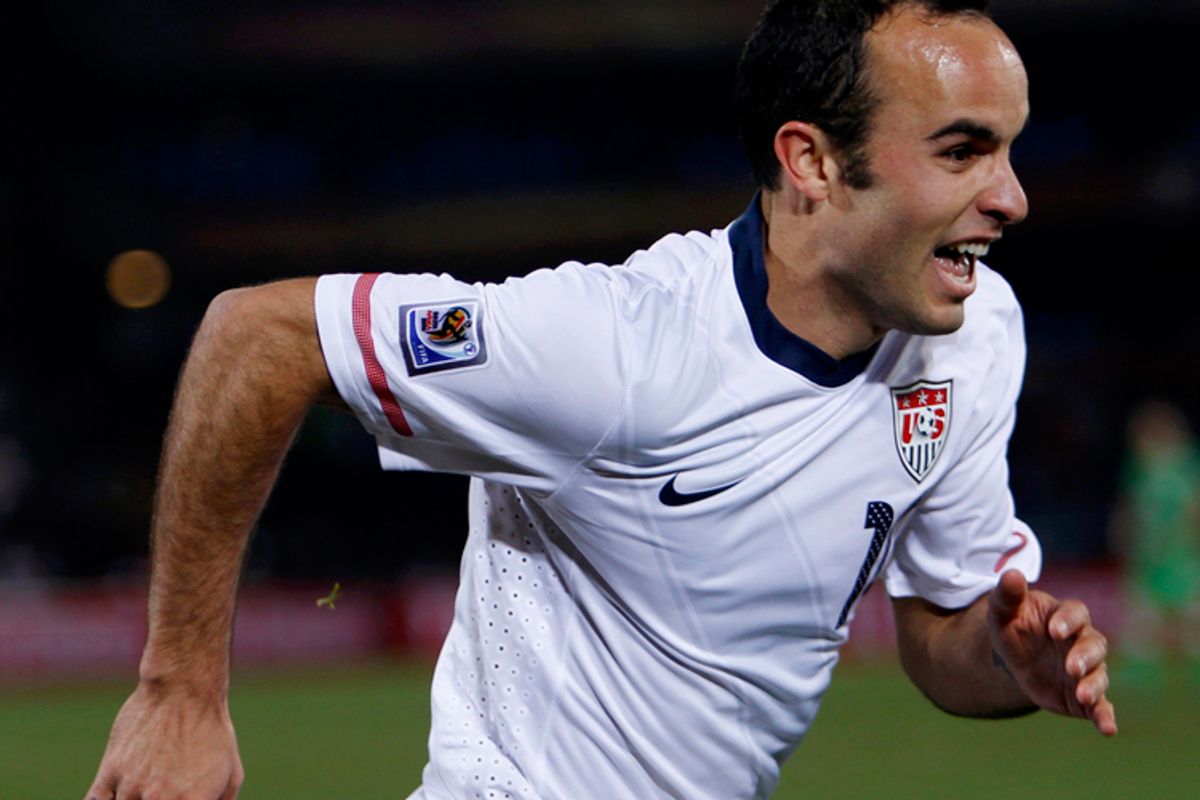 Landon Donovan celebrates after scoring the winning goal against Algeria during a 2010 World Cup Group C soccer match in Pretoria.
--

For weeks a multi-front soccer culture war has been raging in the blogosphere. But one goal by the man who just staked a pretty good claim to the title of " greatest player in the history of U.S. soccer," Landon Donovan, should permanently change the terms of debate.

But first a little context: In the group round of the World Cup, scoring a goal in "stoppage time" -- a few minutes of overtime after the end of regulation to make up for time lost to injuries -- to break a scoreless tie and move on to the next round is one of the most dramatic things that can possibly happen in soccer. Three more minutes and the U.S. would have been out of the World Cup. One fortuitous kick off a rebound by Donovan and the U.S. not only moved on, but won its group. You might be able to argue that a three-run-homer in the bottom of the ninth in the seventh game of a league championship series is comparable. But on an international stage, there's nothing quite like it. The fortunes of four nations swung on that goal.

I heard it on the radio. I don't have cable, and 7:00 a.m. on the West Coast is a little too early for me to hit the sports bars -- at least in the group round. I was trying to put together a blog post about the miserable new home sales numbers reported this morning. But it was hard to concentrate. From very early on in this game, it was clear that the U.S. had to win. England had already scored a goal in its own do-or-die match, played simultaneously with the the U.S-Algeria game. Tension mounted steadily throughout the 90 minutes of regulation. The U.S. seemed to be clearly the better team, with numerous chances to score. But by the time stoppage time commenced, hope was all but lost.

And then exultation. The radio announcers were gibbering. Twitter broke immediately. Facebook and ESPN slowed to a crawl. It's no exaggeration, I think, to call this one of the most dramatic moments in U.S. soccer history.

So what it does say for soccer's place in the pantheon of American sports?

Roughly speaking, two overlapping propaganda wars have been raging on the Internet with respect to what soccer in the U.S. means.

The first is explicitly political. Social conservatives see the slow rise of soccer's popularity in the U.S. as unwanted proof of increasing multicultural diversity -- collateral damage from immigration, legal or illegal. With each new triumph by the U.S. team, the dream of American "exceptionalism" dies a little death. Glenn Beck doesn't even think Americans should watch the World Cup, lest they betray their patriotic duty. And while the left isn't as explicitly ridiculous on their side of this ledger, you do sometimes hear a whiff of the converse: that the growing signs of soccer prominence in the U.S. are supposed to signify a long-overdue dismantling of U.S. superpower ideological primacy. Since at least the end of World War II, the U.S. has exported its culture to the rest of the world -- soccer's rise is the revenge of the imperialized, or more, generously, signifies what one of my tweeps just called America's "return to the community of nations."

Then there's the parallel sports-fan-in-a-bar perennial. For many Americans, soccer just seems boring, an exercise in meaningless Brownian motion, as an acquaintance of mind recently observed. Scoring is minimal, strategy is inscrutable - heck, there isn't even time to grab a beer during a commercial! How can a zero-zero tie possibly be described as "thrilling?" More people watched college football's Outback Bowl than the Slovenia-U.S. match. In riposte, there are no shortage of soccer evangelists declaring that Americans just don't get the "beautiful game," the clear implication being that soccer-haters are boors who must be distracted by pinball excitement and fireworks to have any fun. One side says the game is stupid, the other side says its the fans who are dumb.

Pick your stance and fight for it if you will. Right now, I eschew them all, as I revel in a moment of drama that has been a long time coming, for me. I'm a fan, pure and simple, always have been, always will be. The more familiar and knowledgeable I become with any sport, or art, or artist (or anything really, my friends now not to get me started on guano birds and the economics of fertilizer) -- the deeper and more meaningful my fandom becomes. So I try to pay attention, especially to what I don't understand. 20 years ago, I was a summer intern at the Far Eastern Economic Review in Hong Kong during the 1990 World Cup. Riding the subway, I was fascinated to see crowds of Chinese and Brits watching games projected on the walls of subway stations, involving teams from countries thousands of miles away. I was intrigued at their obsession. I knew nothing about the game, but I have always wanted to know more about what I don't comprehend.

Twenty years of slowly accreting familiarity crested this morning, in an appreciation for the kind of glory that is special to the game of soccer. I don't know of another sport that can boast the same kind of slowly accumulating tension against a remorselessly ticking clock . When there are ten minutes to go to in a World Cup, there are ten minutes to go, (stoppage time excluded, of course.) It's not like the last three minutes of a close NBA finals game, where time seems to stretch into infinity. The end is nigh, there's little you can do about it, the action on the field gets more and more frantic...

Delayed gratification -- so sweetly expressed by the U.S.-Algeria game, where both teams had numerous chances, but just couldn't break through -- makes the final explosion all the more orgasmic. Sure, in many games that release never comes. But that makes those moments of exultation all the more amazing. You gotta pay your dues. I paid my dues for twenty years to fully appreciate Landon Donovan's greatest moment.

That doesn't mean that soccer is better than American football or basketball, any more than, say, John Coltrane is better than the Beatles, or Michael Jordan is better than Sandy Koufax. I love them all. It's all good. Landon Donovan, in the right place at the right time, just experienced a moment that any athlete, in any sport, dreams of but rarely achieves -- to come through for yourself, your team, your nation -- at the most crucial point. That moment is his, forever. Instant legend. I love it when that happens.

We're going to see a lot of bandwagon fans jump on the U.S. train in the next few days. We may even see the culture wars break out into even more ferocious fits of spleen. Hype for American soccer will reach new heights. I welcome it all, even if it quickly drains away in the aftermath of a dispiriting second round loss. This moment is good enough. We don't need to impute geopolitical significance, we don't need to decide one sport is better than other. Don't we just want to be thrilled? I know I am.

How The World Works World Cup