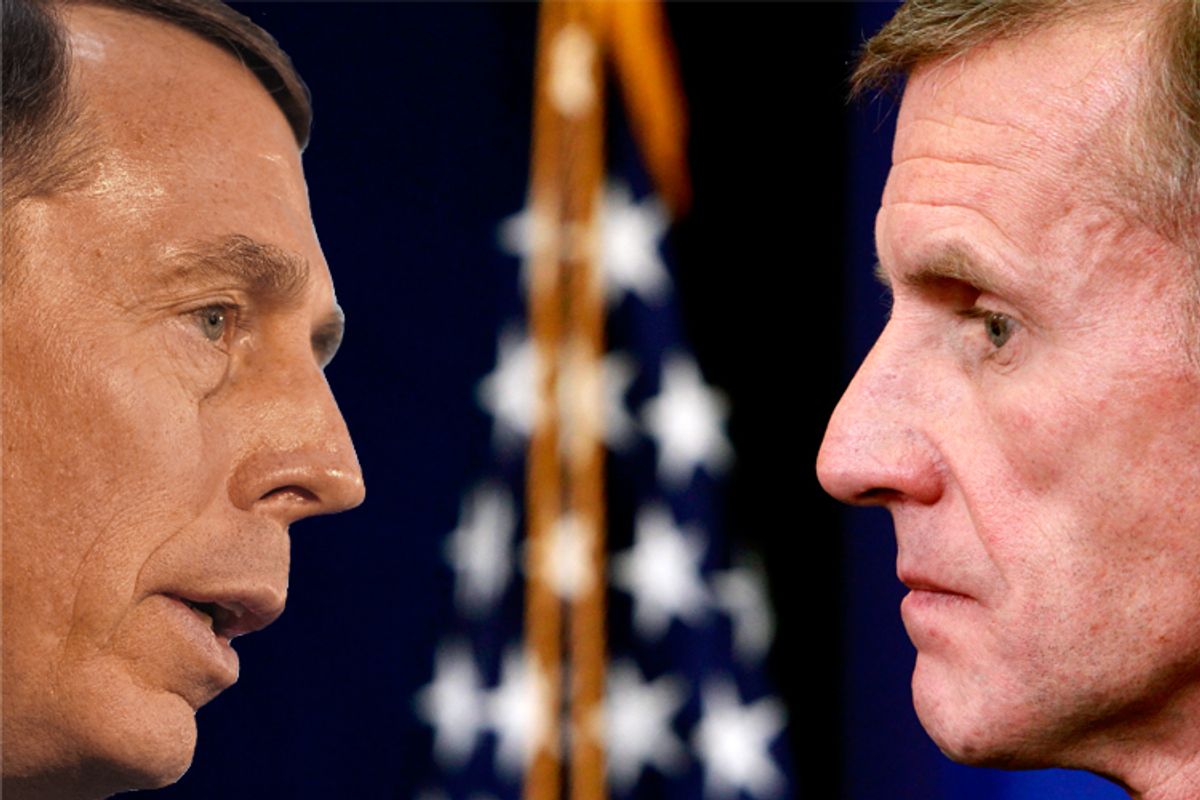 Throughout the Rolling Stone article that brought him down, Gen. Stanley McChrystal is described as "America's leading evangelist for counterinsurgency" -- a leader who surrounded himself with a crack team of "counterinsurgency experts" devoted to using that strategy to win the war in Afghanistan. But the man who co-wrote the military's 2006 counterinsurgency manual with Gen. David Petraeus says McChrystal didn't appear to understand or embrace that strategy's cornerstone: full military partnership with civilian government allies.

"If you look at Iraq, Petraeus and [former Iraq Ambassador Ryan] Crocker were joined at the hip and closely coordinated State Department and military activities," said Conrad Crane, the leading author of what has become the counterinsurgency bible. "From the reports, it appears that the close cooperation in Afghanistan was not there."

Crane said that the authors of the counterinsurgency manual agreed on the fundamental importance of inter-agency and international coordination and cooperation. "When we did the counterinsurgency doctrine, we moved unity of effort up to the second chapter to emphasize how important that is," he explained. Crane describes the lessons in that chapter, "Unity of Effort: Integrating Civilian and Military Activities," as vital.

"You need unity of effort because you've got so many players," Crane said.

The counterinsurgency manual authored by Crane and Petraeus puts particular emphasis on coordinating closely with civilian entities, like the State Department. "Commanders must be familiar with other U.S. government organizations and aware of the capabilities they can provide ... Commanders and civilian leaders of U.S. government organizations should collaboratively plan and coordinate actions to avoid conflict or duplication of effort," it says. "There is no way for military leaders to assert command over all elements -- nor should they try to do so."

The Rolling Stone piece shows in excruciating detail how McChrystal ignored the strategy's emphasis on close collaboration with civilian colleagues. He and his coterie displayed open disdain for Vice President Joe Biden (Who?" McChrystal joked, while aides called him "Bite me"), U.S. Ambassador Karl Eikenberry, Special Representative to Afghanistan Richard Holbrooke (McChrystal mocked his e-mail), National Security Advisor Jim Jones (aides called him a "clown"), and "some French minister" who represents one of the only countries in the world still willing to dedicate forces to the effort (an aide described McChrystal's meeting with the minister as "fucking gay").

"Although McChrystal has been in charge of the war for only a year, in that short time period he has managed to piss off almost everyone with a stake in the conflict," Michael Hastings summarized in his piece.

President Obama has now wasted a year with McChrystal spearheading the counterinsurgency effort while ignoring vital elements of the doctrine. That leaves McChrystal's replacement, David Petraeus, with only a year to maneuver before the United States begins removing troops from that country in July 2011.

Crane says he is relieved that Obama has picked Petraeus to take over in Afghanistan, though worried that he may only have a year to maneuver in an extremely difficult, complex situation. "He is the best. I would not put anything past that man," Crane said about Petraeus. "And unlike the nincompoops that seem to be around McChrystal, Petraeus has the best around him."

A former special operations operator who knows almost all of the people in McChrystal's closest circle described the fiasco among those men this way: "Simply, every one of them became too complacent in their sense of self," he wrote in an e-mail. "Tragic."

If McChrystal and his counterparts had embraced the counterinsurgency bible's "Unity of Effort" teachings, it remains unclear whether that would have led the United States out of the woods in Afghanistan. Now they have one less year to try.