Pundits scream for the general's head, and for Obama (along with Vice President Bite Me) to show "who's boss" 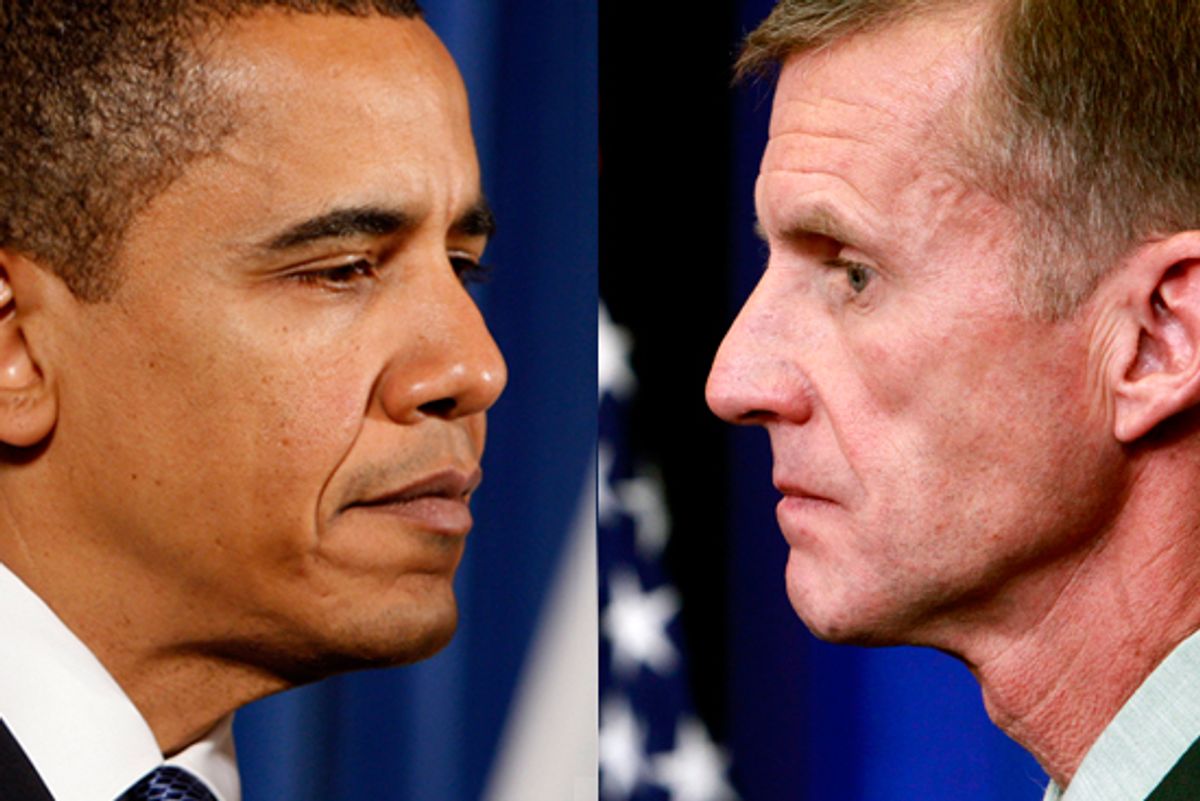 As Stanley McChrystal takes the long walk to the principal’s office, many commentators have suggested that the president shed his image as a cerebral waffler and bring the short, unhappy tenure of General McChrystal to an end. This would, according to some, show the kind of firm, decisive leadership often associated with Truman’s dispatch of MacArthur, or Bush’s impromptu remarks to the 9/11 cleanup crews at the site of the World Trade Center.

Let’s hope that Obama is not persuaded by such patently silly advice. It is an idée fixe of some political commentators that Obama should parlay every presidential dilemma into an opportunity to show "true leadership." But judging Obama’s presidency by whether he’s displaying the right emotions (resolve, toughness, and anger, to name a few) gives an unintended and entirely superficial meaning to the phrase "presidential performance."

John Kerry seemed to understand this yesterday when, in a futile attempt to douse the emerging firestorm, he said, "Everyone needs to take a deep breath and give the president and his national security team the space to decide what is in the best interest of our mission."

That is, of course, an eminently sensible approach to the McChrystal flap. The idea that the president’s decision would be based on anything other than McChrystal’s ability to implement Obama’s Afghanistan strategy betrays near-Nixonian levels of political cynicism. Can anyone seriously suggest that the president dismiss the commander of U.S. and NATO forces in America's longest-ever war, based on sassy comments in a magazine article, because the optics would be good?

Even if he were so inclined, any attempt by Obama to use McChrystal’s departure to burnish his leadership credentials would likely fall flat. One of the central themes of Obama’s tenure has been the return of the presidency to adult hands after many years of petulant and impulsive leadership. Obama has stuck with his restrained, sober, analytical governing style through the tumultuous 18 months of his presidency (even when various corporate villains have provided tempting opportunities for him to raise his voice and stomp his feet). This is, after all, the man who waited to enter the congressional healthcare debates, waited to take public ownership of the BP fiasco, and waited . . . and waited before ordering an additional 30,000 troops to Afghanistan. Does he really want to send the message that the one thing he can’t abide, the one thing he will not brook, is calling the vice-president "Senator Bite Me"?

And assume, contra this reasoning, that Obama’s firing of McChrystal were greeted as a rare display of political backbone. There’s little indication that the message would resonate beyond the chattering class. Nearly nine years in, the war in Afghanistan is barely the subject of notice, let alone the locus of intense popular attention. (It’s not for nothing that the most talked about Afghanistan article in recent months involved mineral deposits.) It hardly makes sense for Obama to make empty gestures to an empty crowd.

Worth noting, too, is the fact that any boost to Obama from McChrystal’s firing is likely to be short-lived. The war in Afghanistan is not, after all, a subject that lends itself to flashy displays of symbolism. People may applaud Obama’s decision now, but if past is prologue, the situation in Afghanistan will remain fragile and messy for years to come. If that’s the case, Obama’s decision to dump McChrystal only months into the troop surge will look less like strong, principled leadership than the type of rash, gut-level, Bush-43-style decision-making that so many have grown to despise.

None of this is to say, of course, that McChrystal’s remarks should not be condemned. They should be, as should the atmosphere of disrespect toward civilian leadership that flourished among his aides. But after the rain of rebukes from Republicans and Democrats alike, and the ignominy of McChrystal’s walk of shame to the White House this morning, there’s not much to be accomplished by further punishment.

The message of civilian superiority to military brass has been conveyed and, one would think, received. Obama can shout that message even more loudly with McChrystal’s termination, but is the marginal benefit worth the host of practical problems that would flow from his departure? Certainly not if the benefit is the vindication of some vague principle of military "respect" for civilian command. And especially not if the whole exercise is merely to engage in a pantomime of leadership.

We can be forgiven for having an occasional weakness for big, grand gestures like Bush’s speech at Ground Zero. But we shouldn’t forget that Obama’s Afghanistan problem is an attempt to close a military conflict that Bush eagerly anticipated in his chest-thumping speech at the World Trade Center site in 2001. It’s worth remembering that next time someone tells the president to pick up a bullhorn.