Eliot Spitzer, Kathleen Parker to host "Crossfire: The Next Generation" 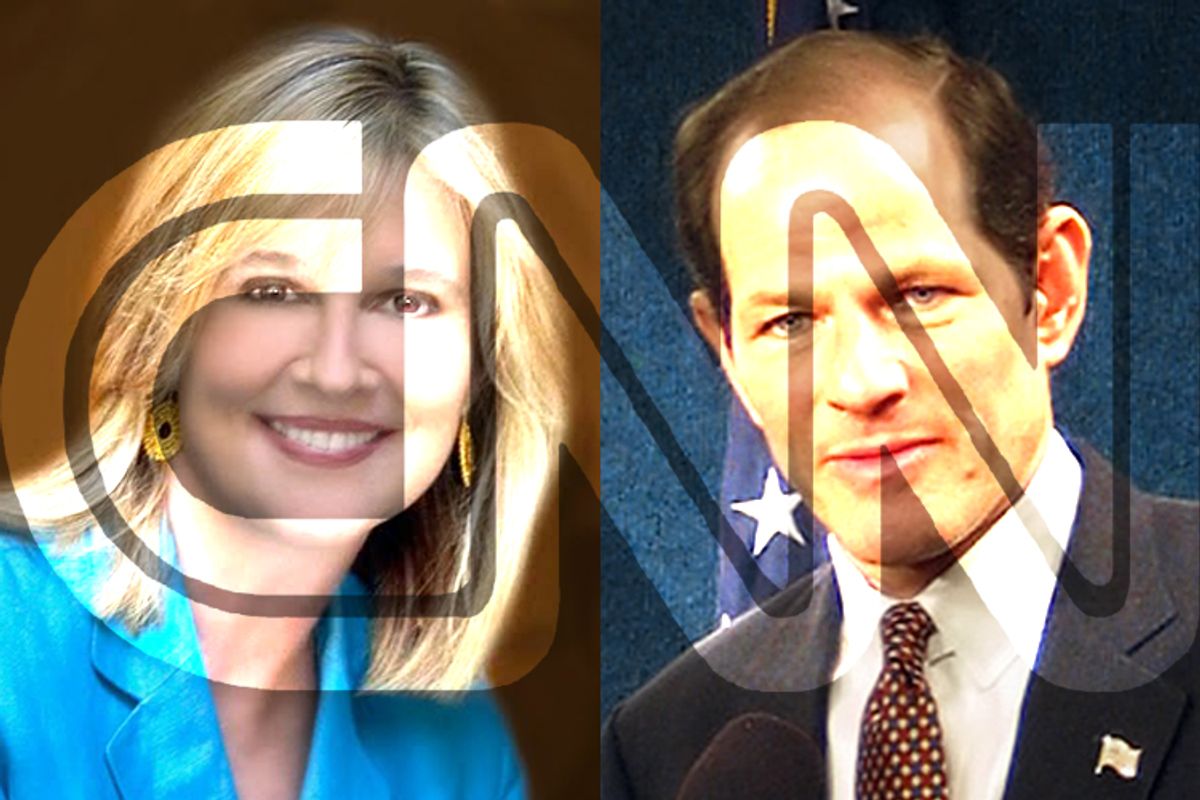 Because CNN is now basically E! except without E!'s coherent ideology and shared sense of purpose, they have hired disgraced former New York Governor Eliot Spitzer to cohost a television show on their 24-hour news network. He will lead a "nightly roundtable" with Kathleen Parker, a terribly average political columnist who became suddenly successful when she announced that, despite being a female Republican, she disliked Sarah Palin. (She was smart enough to announce this in a column, instead of accidentally into an open mic like Peggy Noonan, who is still a much better columnist that Parker despite being a lithium-and-white wine-addicted Upper East Side bag lady.)

Spitzer is famous for being a very beloved New York attorney general and a piss-poor governor who slept with prostitutes regularly and then resigned in disgrace when that fact was discovered. He is also a boring Slate columnist.

Parker's a classic anti-feminist "save the males" sub-Maureen Dowd columnist who tends to be very low-key on television, which I guess will make her the Colmes to loud, intense Spitzer.

In a world where Fox is successful because propaganda is more compelling than news and it tells old conservative people the disinformation they want to hear with great production values and compelling personalities, and where MSNBC is chugging along because some American are liberals, CNN is dying because of its insistence of presenting two opposite-but-equal positions on every single issue of the day, presided over by people who in many cases are obvious idiots (Rick Sanchez, Wolf Blitzer), unwilling to and incapable of explaining what is actually "true." So CNN's answer, obviously, is MORE BALANCE, and also a host who is already famous, for sleeping with prostitutes and so on. Explain yourself, CNN president Jon Klein:

"Other cable news channels force-feed viewers one narrow, predictable point of view; in contrast, CNN will be offering a lively roundup of all the best ideas -- presented by two of the most intelligent and outspoken figures in the country," said Klein. "Eliot and Kathleen are beholden to no vested interest -- in fact, quite the opposite: they are renowned for taking on the most powerful targets and most important causes."

Oh, good, a roundup of all the best ideas. I'm so sick not having former governor Eliot Spitzer and this lady around to explain to me which ideas are the best. But the thing is, Klein, your hosts are not "renowned" for the things you listed. One of them is "renowned" for sleeping with prostitutes, and the other one is "renowned" for noticing that Sarah Palin is dangerous and dim -- a realization that any literate adult is capable of.

Here's my suggestion to CNN: leave Parker to syndicated columns and wait until after November to launch this show. Then your conservative co-host could be soon-to-be-former South Carolina Governor Mark Sanford!