And FIFA does nothing -- not that we're surprised, given its track record on anti-female behavior 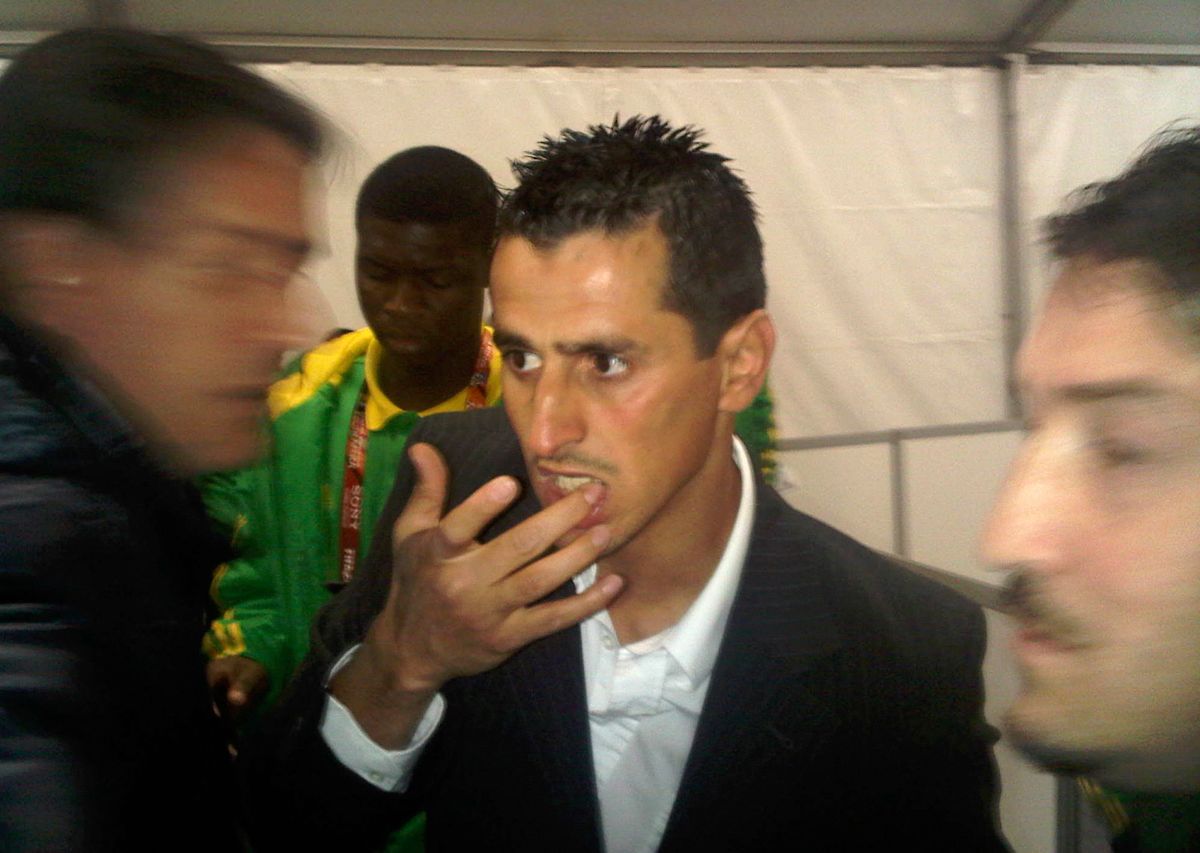 Algeria striker Rafik Saifi wipes his mouth in the mixed zone at Loftus Versfeld in Pretoria, South Africa, after the Algeria against United States in a World Cup soccer match Wednesday June 23, 2010. Saifi has been involved in an altercation with a journalist after his team was eliminated from the World Cup. The incident following Wednesday's 1-0 loss to the United States happened at Loftus Versfeld. A female reporter from an Algerian publication was heard shouting at Saifi, who left the stadium holding his lip and refusing to respond to questions. (AP Photo/Rob Harris) (Rob Harris)
--

When Algeria took on the United States in a World Cup match yesterday, the team had some trouble going on the offense -- that is, until after the game. Walking through a press zone after his team's tournament-eliminating defeat, star striker Rafik Saifi approached a female journalist named Asma Halimi and allegedly slapped her across the face.

The bizarre wordless attack, which provoked Halimi to lunge back at her assailant, occurred in full view of dozens of witnesses. Her crime? Apparently last year Halimi, who writes for the Algerian sports daily Competition, published a translation of an interview Saifi did with an Arabic paper in Qatar, revealing his engagement to a French woman.

Yeah, Algeria and France have a sensitive relationship (colonialism will do that to you), and yeah, Saifi was probably trying to keep that information on the down low, but it should go without saying that it is completely unacceptable for a player to strike a journalist -- period. Full stop. Especially when her "offense" was to publish information that he had already made publicly available through another media outlet.

But Saifi's attack on Halimi is also troubling for an entirely different reason: It has revealed once again the laissez faire attitude that soccer’s governing body, FIFA, has toward issues of violence against women. In a statement Thursday morning, a spokesman for the organization, Nicolas Maingot, declined to comment on the incident, saying only that "it's clear the values of fair play apply not only on the pitch, but off the pitch as well."

I don’t know where he's getting this "clear" picture of the situation, but I'm definitely not seeing it. The Saifi incident is only the latest in a series of anti-female acts we’ve seen during these games, from British authorities encouraging women to avoid domestic violence by steering clear of their men after games (because, you know, when it comes to battering women, boys will be boys) to Spanish fans viciously blaming their defeat against Switzerland on the distracting influence of journalist Sara Carbonero, girlfriend of goalkeeper Iker Casillas (she was reporting from behind the net during the match). Oh yeah, and there was that whole bit where FIFA refused to make sex safer during the Cup by allowing the distribution of condoms at games.

Each of these events is troubling on its own, but given the location of this year's World Cup, it is especially disturbing to see FIFA’s total silence on issues concerning the safety of women. South Africa has the highest per capita incidence of rape in the world -- and one of the lowest conviction rates. One in four South African men actually admits to having raped at least one woman in his lifetime.

Yes, I know that FIFA is a sporting organization, I realize that it's not necessarily its responsibility to address the social ills of the world. But given the kind of globally visible platform the World Cup provides -- as much as half the planet's population tunes in to watch the final game -- it's a shame to see it pass up this opportunity to editorialize about the rampant sexism coursing through global sports culture. And it's not as if it hasn't made this type of social stand before -- you couldn't turn on a game in the '06 World Cup without seeing a thousand "SAY NO TO RACISM" posters ringing the field. "There is social responsibility in football, and our game is open to everyone," FIFA president Joseph Blatter declared at the time.

But when it comes to sexism, discrimination is woven so tightly into the fabric of the sport that it barely raises an eyebrow. When French striker Zinedine Zidane famously headbutted the Italian Marco Materazzi in the 2006 World Cup final, the incident prompted months of investigation from FIFA to discover what Materazzi had said to prompt the attack. If it had been sparked by a racial slur, the Italian would have faced a far harsher penalty than he ultimately did when it was revealed that he had "merely" called Zidane's sister a whore.

Nothing can change the sexism of soccer culture overnight, but FIFA has enormous power to begin steering things in the right direction. And it can start by denouncing players who batter women in public. That, at the very least, should be a no-brainer.