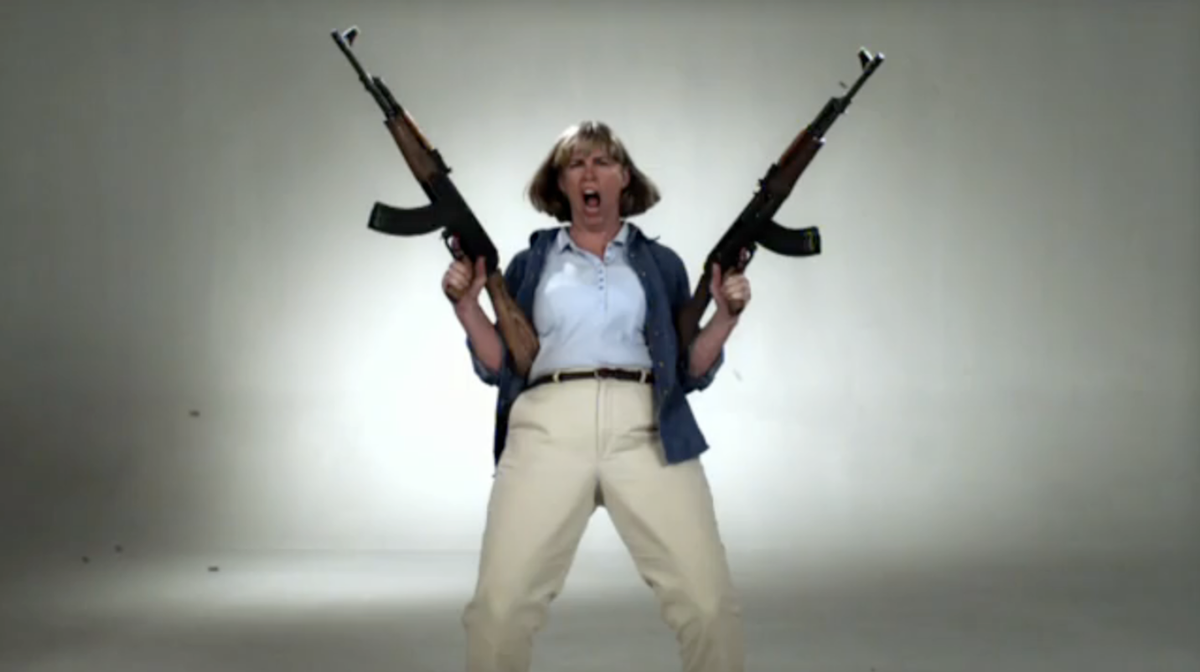 They wear pearls and sensible shoes and mom jeans. But these four ordinary, soccer mom types are also brandishing some major firearms. And as they blast their weapons in slow, action movie motion, the statistics tell the story – that "2,200 children will be reported missing today" and "over 260,000 children will be abducted this year."

But despite what the nice lady with "My son is an honor student" t-shirt and all that ammunition might lead you to believe, "You don't need a gun to protect your kids." No, you just need to get on AmberWatch's predator alert list.

Now, I have two young daughters, and if anyone tried to hurt them, I would only too gladly blow said person's head off. You want to get my maternal rage all frothed up? By all means, just mention anything about anyone who hurts a child. So keep up the good work AmberWatch Foundation, even if you're not actually the US Department of Justice and National Center for Missing and Exploited Children, which issue official AMBER alerts.

But despite being the target audience for some of that grrr argh sentiment, I'm too baffled by the spot to get on board. I'm not saying don't have a firearm, but if you want to talk about protecting kids, maybe creating an ad featuring a form of weaponry that kills a child every nine hours in this country isn't the hottest way to do it.

And if you want to toss out that statistic about 260,000 children abducted every year, maybe it'd help to point out that nearly 80% of that figure (which dates, by the way, from 1999) represents family abduction, and only 115 were "stereotypical abductions" involving a stranger who transports and detains a child "with the intent to keep permanently or kill." So, statistically speaking, if a child is reported abducted, the likelihood is greater that the culprit one of those rootin' tootin' moms than a stranger.

That doesn't change that unfathomably awful things do indeed happen to children, that monsters sometimes lurk around the corner, watching and waiting. Whether it's 260,000 or 115 or one, it's still your worst nightmare. But the idea that children need Rambo-esque mothers – and only mothers, I note – because they're being picked off the streets in droves just doesn't cut it. It's true – I don't need a gun to keep my kids safe. But I'm not sure I need an in-your-face campaign of fear either.