Were the American hikers abducted by Iran's Revolutionary Guard?

A new investigation strongly suggests they had not crossed the border, and became victims of a marauding official 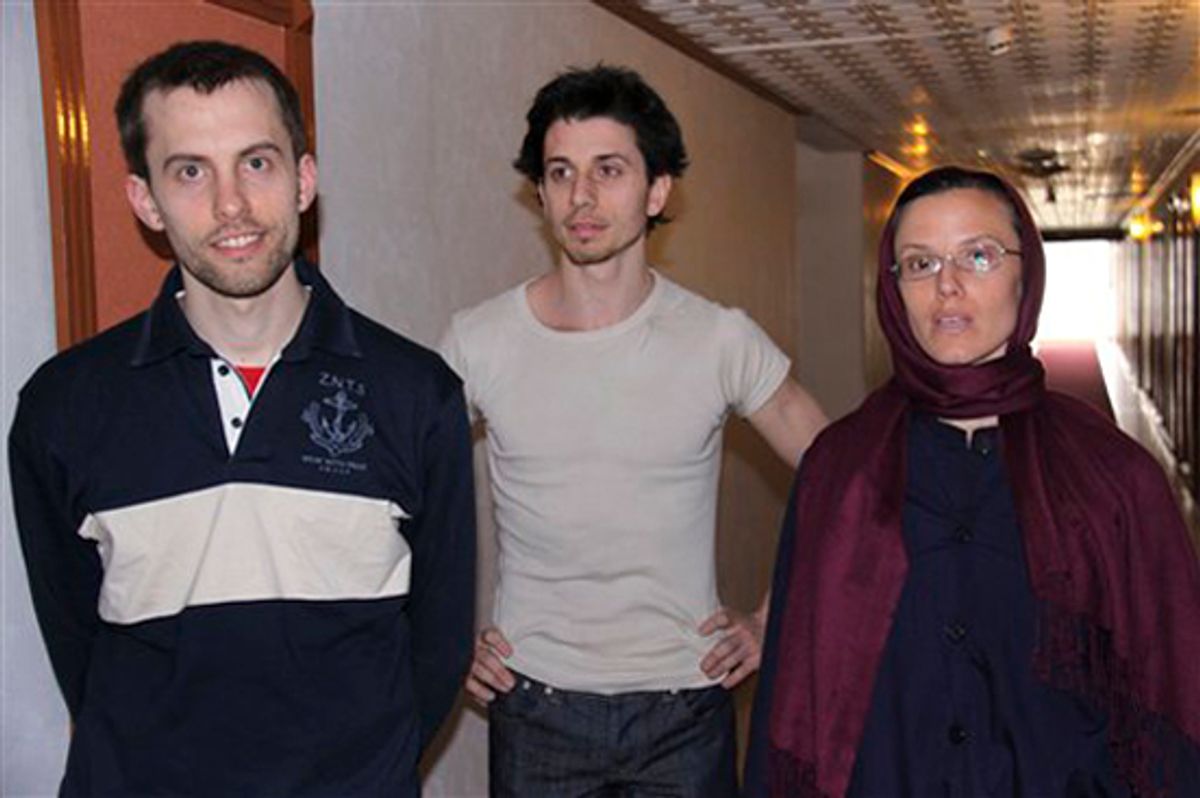 American hikers Shane Bauer, left, Josh Fattal, center, and Sarah Shourd stand prior to meeting with their mothers at the Esteghlal hotel in Tehran, Friday, May 21, 2010. The mothers of three Americans jailed in Iran for 10 months had more time with their children on Friday after an emotional reunion a day earlier in a Tehran hotel overlooking Evin prison, where the three have been held since their arrest in July along the Iran-Iraq border. (AP Photo/Press TV) (Str)
--

The Iranian regime has always insisted that the arrest of the three American hikers held in Tehran for the past 11 months on espionage charges occurred on its territory, close to the frontier with Iraqi Kurdistan. But a new report by the Investigative Fund and the Nation magazine strongly suggests that the hikers -- including independent journalist  Shane Bauer, his fiancée Sarah Shourd, and their friend Joshua Fattal -- were actually seized by Iranian police officers on the Iraqi side of the border.

Two eyewitnesses who observed the incident on July 21, 2009, say that as the hikers descended a mountain on the poorly marked border, uniformed Iranian police border guards "waved the hikers toward the Iranian side" in a threatening manner, then fired a warning shot into the air. Then the guards ventured a few yards into Iraqi territory -- where they lacked any authority -- and apprehended them.

The witness statements corroborate remarks made by Bauer last May 20, during a televised meeting between the hikers and their mothers at a hotel in Tehran. At the time, Bauer said they had not walked into Iran, as the government had charged, but then stopped abruptly, saying, "We can't really talk about that." Not long after the original arrest, in August 2009, London’s Daily Telegraph quoted a local tribal leader saying he knew that the hikers "were targeted and captured by a group that came over from Iran, ignoring Iraq's sovereignty."

The underlying motive for the arrests remains uncertain But the five-month investigation also reveals that the commanding officer of the Revolutionary Guard intelligence unit in that region, who initially took custody of the hikers, was shortly afterward placed under arrest himself. The intelligence chief, Lt. Col. Heyva Taab, has turned out to be a highly suspicious character, according to sources in Iran and bulletins posted on a local website, Kurdistan Va Kurdnews, which claim that Taab was the single most powerful figure in Iran's Kurdistan province before his fall.

Since then, those sources say, Taab has been implicated in an enormous smuggling enterprise that was responsible for "dozens of murders, rapes and kidnappings." His alleged and highly colorful crimes, which the story describes in detail, have become the subject of numerous lawsuits by the families of victims. Taab reportedly awaits execution in a Tehran prison.

Written by a courageous Iranian journalist who goes by the pen name of Babak Sarfaraz, the story places the detention of the hikers within the context of political and armed conflict between the Islamic Republic and the Kurdish communities demanding regional autonomy. (Here I should note again that I'm an editor of the Investigative Fund, which has also supported Bauer's reporting in the past.)

Although Iranian officials say that the hikers will soon be put on trial for espionage, the Taab case may complicate the government's case:

"These new revelations, if indeed true, show the hikers have been victims of political machinations and manipulation," said Hadi Ghaemi, executive director of the International Campaign for Human Rights in Iran. "The fact that they have been held for so long without prosecution strongly supports this trend. Under Iranian laws, they have committed no crime and should be released immediately. Their Iranian lawyer, who has studied the judicial files against them, has consistently maintained the only charge against them is illegal entry, which is subject to a fine and not arbitrary detention for so long. With this new information, even that charge appears fabricated, and there is no basis for holding them."

Friends and family of Bauer, Shourd and Fattal are seeking their release through Free the Hikers, which organizes support and statements on their behalf, most recently including appeals from Desmond Tutu, Noam Chomsky, Cindy Sheehan, former U.N. High Commissioner for Human Rights Louise Arbour, and Nobel Peace Prize winners Mairead Maguire and Betty Williams of Northern Ireland.