The whole wheat tortilla that fits

Nothing came close to my definition of the perfect tortilla. Until I learned how to make it 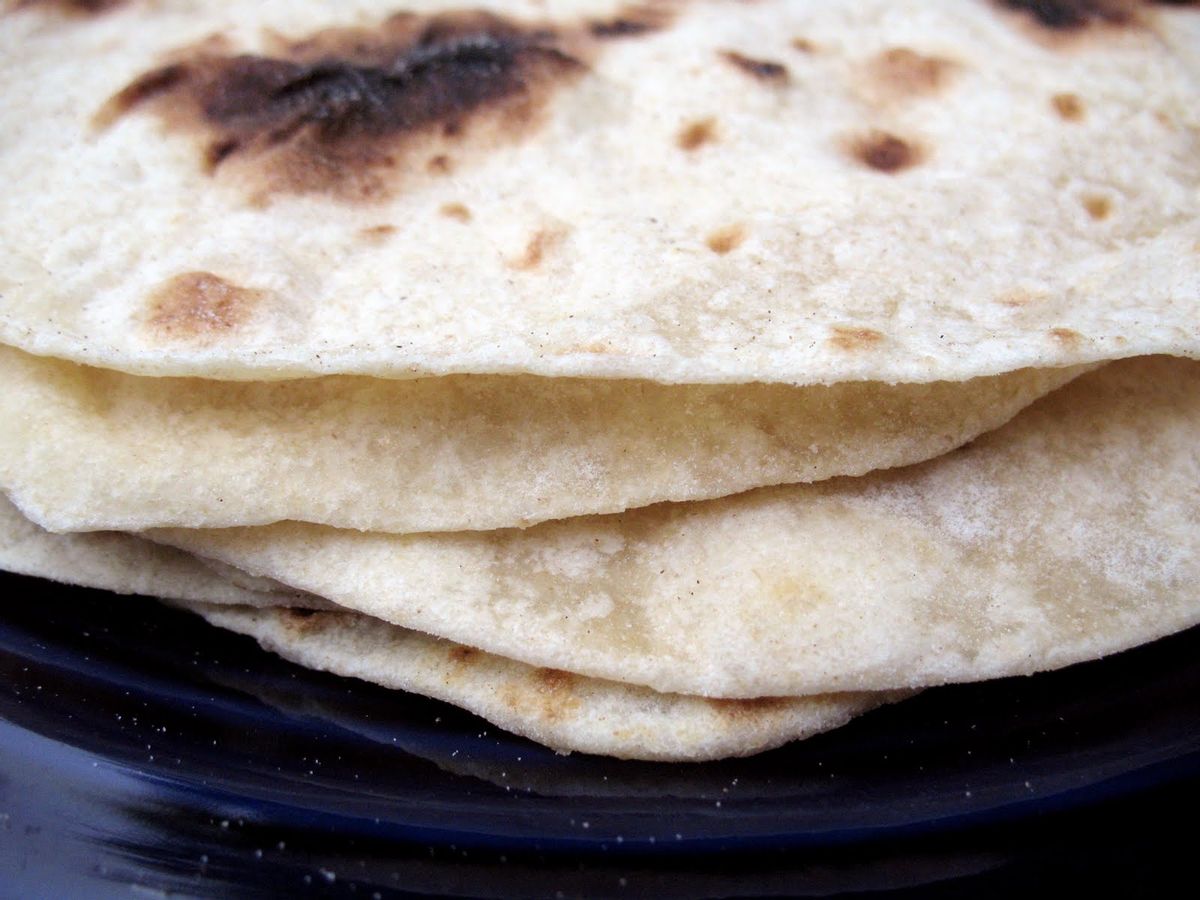 My boyfriend is a very tall man. And also very slim. And for some reason, this particular combination flummoxes the American garment industry. Most clothing manufacturers have taken the term "big and tall" to heart, and can't conceive of one without the other. If a shirt actually hugs his narrow waist, then chances are the cuffs are hovering somewhere mid-forearm. Alternately, if the sleeves stretch nicely to the wrists, then there's likely enough billowy fabric for a good three to four torsos. It can be a bit maddening.

I find a similar frustration when I shop for tortillas. Specifically, flour tortillas. I generally like a bit of whole wheat flour in my savory baked goods, to pretend I'm healthy and enjoy a more pronounced wheaty flavor. But I don't want to sacrifice the traditional goodness of a tortilla, where the flour is touched with a bit of salt and fat to create a quality flatbread. For reasons I cannot figure out, my local grocery store isn't with me on this. They figure that if I want whole grains, then I also must be opposed to fat. And so they try to sell me tortillas that omit the shortening in favor of weird cottony binding agents. Unsurprisingly, the resulting tortillas are not so awesome. I like whole wheat, but I also like fat. And I like delicious tortillas, which require fat. Luckily, I can solve this problem. While, sadly, I don't have the skills to tailor a tall-yet-slim dress shirt, I am fully capable of cutting fat into flour, mixing and rolling dough, and turning out delicious whole wheat tortillas.

Now to the purists who scoff at this idea: I know that whole wheat flour tortillas aren't traditional Mexican food, for the same reason brown rice isn't seen in India: tropical heat + oil = badness. Before such modern conveniences as refrigeration and air conditioning, oily bran and germ needed to be stripped off of grains, so that they could be stored without the danger of rancidity. If we're going for full-on authenticity, these tortillas would feature lard instead of shortening. So evidently I have no qualms about adaptation.

But while whole wheat tortillas may not be traditional, they are definitely delicious. Admittedly, these aren't 100 percent whole wheat, but a mix of wheat and white flours, so you get a bit of toothsome nuttiness without sacrificing delicacy. Although they're just a millimeter or so thick, they still have distinct layers, with a toasty crust surrounding a supple-yet-flaky center. They're fun to make (depending on your definition of fun), and keep well in either the refrigerator or freezer.