What eggplant really wants to be: Pasta sauce

I've always been wary of the Purple Monster, until I learned the most delicious and stress-free way to cook it 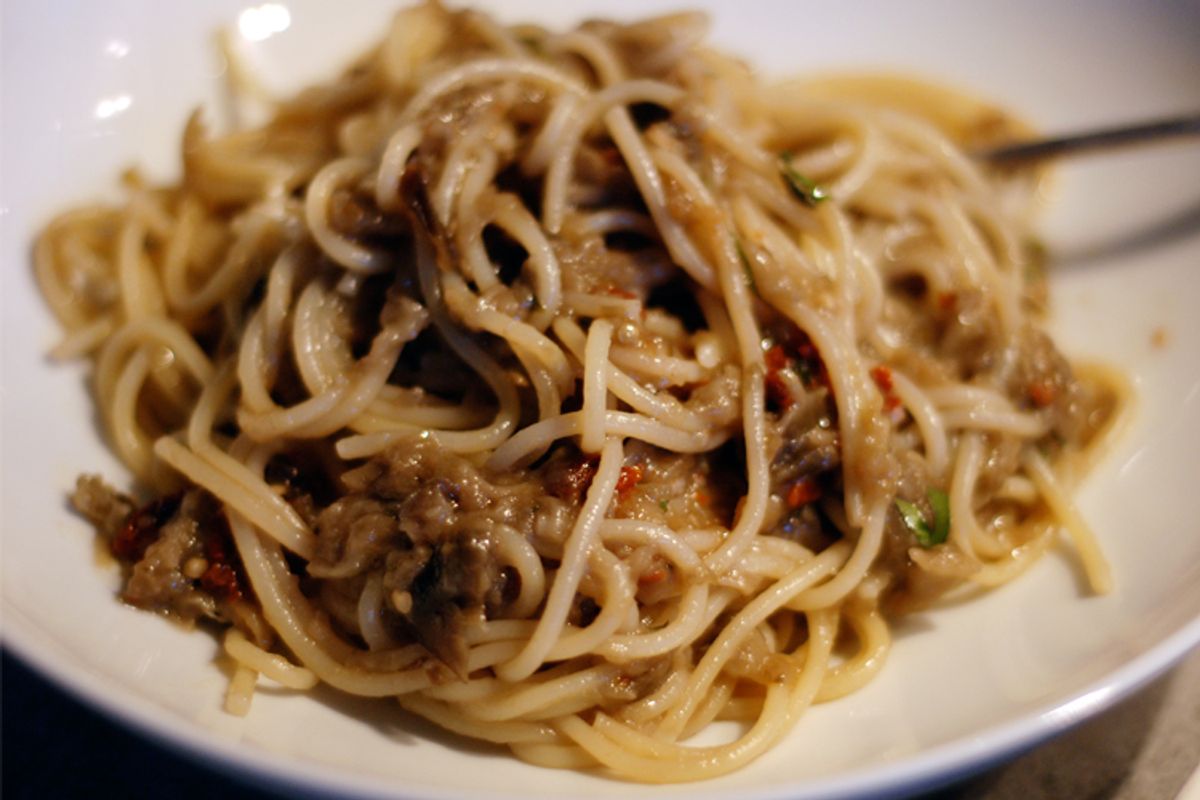 Luisa Weiss, who writes the fantastic Wednesday Chef blog, documents the cooking of recipes written by true luminaries. Through the vagaries of chance, mutual friends, and, probably, the wild spirit of openness engendered by living in Berlin, she recently cooked this old thing and loved it so much she made me think maybe I got something right after all.

A version of this story previously appeared on Gourmet.com.

Hey, is eggplant good for you? I hope so, because I just ate one the size of a chicken. Which was unusual for me, because while I respect eggplant, usually that respect runs more to the side of fear than it does of love.

It's not always easy to deal with, eggplant. It's a fussy creature, finicky and unpredictable. It can be nauseatingly bitter, it's overmature and seedy. It can soak up grease with the strength of a hundred potatoes (maybe instead of their failed "Junk Shot" strategy BP sould have gone for an Eggplant Shot). And its texture can be so weird: a good quick sear and it can be squeaky, almost springy like mushrooms. Or seconds later and it can fall apart, stringy and pathetic, as you try desperately to pull it out of the pan in one piece.

One of the things I'm proudest of in my life is the ratatouille I make, but maybe it's true that nothing good is pure, and here is a confession: I use eggplant in my ratatouille only because I fear it wouldn't technically be ratatouille without it, and it would sound a lot less sexy for me to talk about my excellent zucchini with tomato paste. And so every summer, I fall into a stressful ritual of pulling hot trays out of the oven, hoping I can scoop off beautiful, browned eggplant dice and fold them into the rest of the mix without mashing them into a disfigured pulp.

But last year, I ate the ugliest eggplant of my life at a little neighborhood restaurant in Italy, a truly homely specimen, the kind of vegetable that even tofu points and laughs at. But the oily, gray, lifeless, smushy lumps were utterly delicious, so much so that I had a revelation, about my treatment and relationship with the stuff. Why fight the eggplant and try to get neat, seared cubes? Let it be what it wants to be! Let it turn to mush! Let it soak up oil! Let us all be frank with ourselves.