"Now I know, the dumbness doesn't come just from soundbites," one says into an open mic 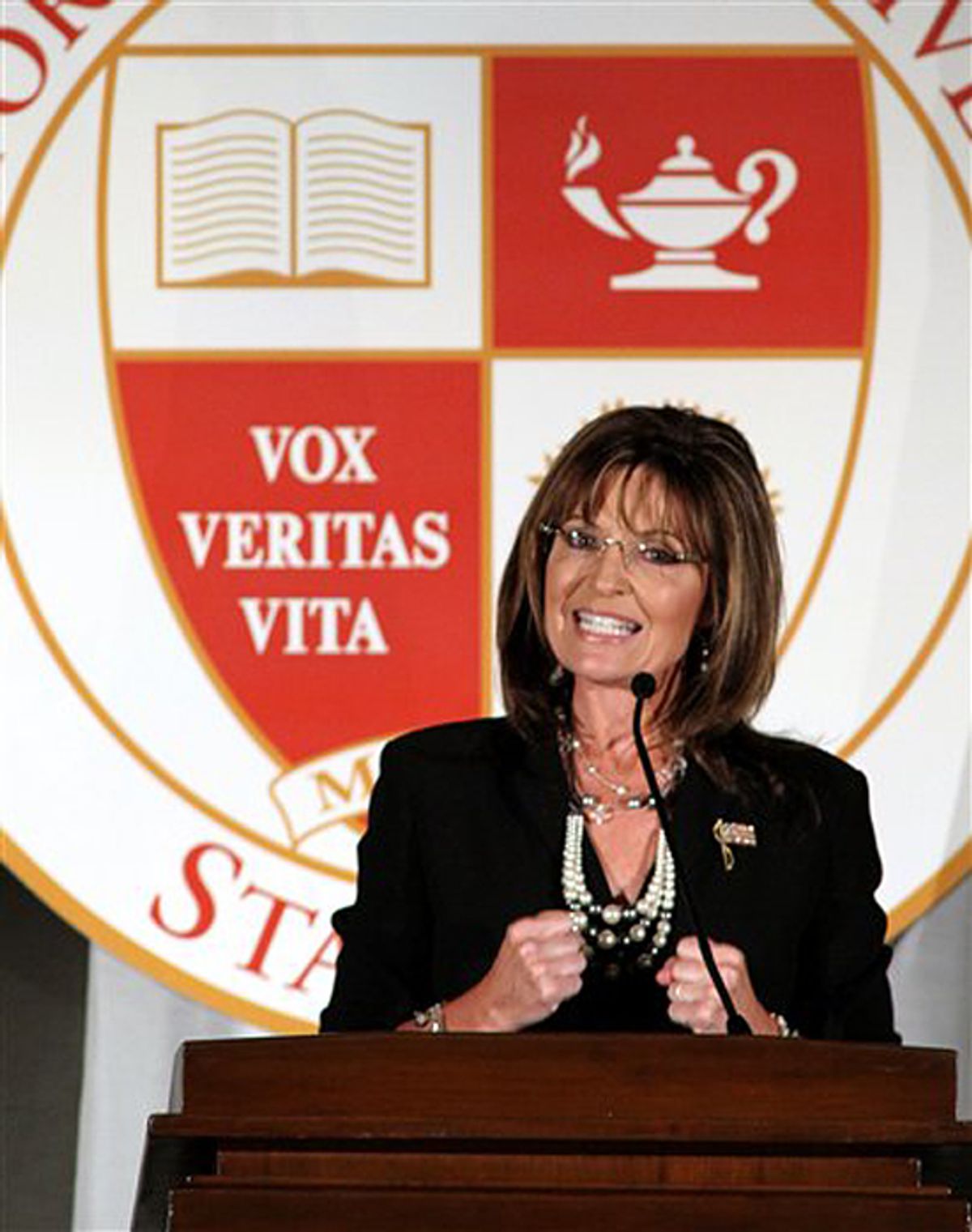 Former Republican vice presidential candidate Sarah Palin gestures during her speech at a fundraising dinner at California State University, Stanislaus in Turlock, Calif., Friday, June 25, 2010. Palin's speech has generated intense scrutiny since the nonprofit foundation holding the event first announced her visit in March. University officials have refused to divulge the terms of her contract or her speaking fee.(AP Photo/Rich Pedroncelli) (Rich Pedroncelli)
--

I know she's going to make herself a martyr over this – and among her followers, it will probably work – but Sarah Palin got remarkably candid reviews of her Friday night speech in Turlock, Calif., when an open mic picked up reporters savaging the former Alaska governor's performance. I just checked Palin's Facebook page and Twitter feed, and she hasn't started trying to drum up sympathy by trashing the Lamestream Media yet, but she almost certainly will. (So far the Lamestream Media hasn't covered the open mic kerfuffle; I found the story on The Political Carnival.)

Palin's entire appearance was controversial. Raising money for California State University-Stanislaus, she reportedly charged a $75,000 speaker's fee and asked for another $18,000 or so in expenses, including first class plane travel for her entourage and luxury accommodations. Although CSU is a public university, its leaders didn't disclose Palin's demands -- saying a private foundation was raising the funds, and was thus exempt from public disclosure laws – and we only know about them because intrepid student journalists found the contract in a dumpster.

In her speech Friday night, the vengeful Palin trashed the students as "dumpster divers" with her trademark meanness: "Students who spent their valuable, precious time diving through dumpsters before this event in order to silence someone ... what a wasted resource," she told the crowd. "A suggestion for those Dumpster divers: Instead of trying to tell people to sit down and shut up ... spend some time telling people like our president to finally stand up." CSU student journalists were barred from the speech.

But the journalists who got to attend Palin's speech were no more impressed than her student critics. The reviews begin as soon as Palin says her final "God bless America."

"I feel like I just got off a rollercoaster,” one man says (the voices, so far unidentified, were all male.) "I don't know how you're gonna make a story out of that,” another remarks, and someone comments, "Well, that's the story.” Another describes the speech as something like a student paper, where "you just try to jam as many quotes in as possible, from as many random things." The most cutting line of all: "Now I know, the dumbness doesn't come from just soundbites."

It's funny that some of the sharpest media criticism of Palin has come in open mic mishaps. During the 2008 Republican convention, Peggy Noonan had a rare moment of clarity on MSNBC, when Chuck Todd asked during a commercial if she thought Palin was the most qualified VP choice: "The most qualified? No. I think they went for this, excuse me, political bullshit about narratives. Every time the Republicans do that, because that's not where they live and that's not what they're good at, they blow it."

CSU officials said they made $200,000, even after paying Palin's fees and erecting tall, temporary security fences around the event. While Palin endorsed GOP Senate candidate Carly Fiorina, she didn't bother to campaign for her while in the state, perhaps an acknowledgement that the Palin brand is a boost in a GOP primary but death in the general election in this true-blue state.