The most logical choice for Byrd's seat 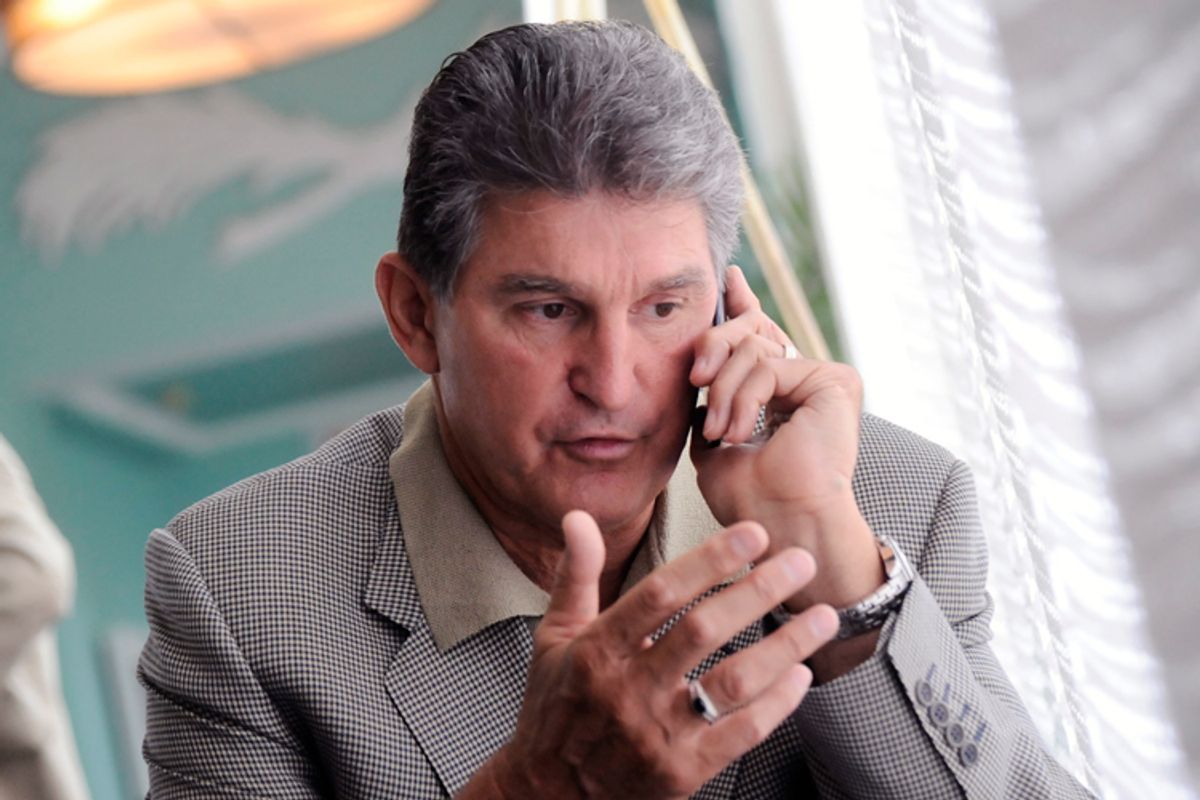 West Virginia Gov. Joe Manchin speaks on the phone about the death of Sen. Robert C. Byrd on Monday.
--

[Updated]West Virginia Secretary of State Natalie Tennant's office tells us that she will announce at a 4:30 p.m. press conference (which apparently will be streamed on her office's web site) how the Senate vacancy caused by Robert Byrd's death will be handled. It's already known that Democratic Governor Joe Manchin will appoint someone to the seat; the question is whether there will be a special election this November (for the final two years on Byrd's term) or whether the vote will be delayed until 2012, when the seat is normally up.

Even though I tried to argue that a 2010 special election might actually be better for Manchin (who plainly wants the seat), it seems clear that he wants to appoint a caretaker to hold the seat through 2012. This would allow Manchin to finish his gubernatorial term and to run for the Senate in what would presumably be a more favorable (or less unfavorable) climate for his party. We'll see if Tennant, a fellow Democrat, plays along.

As for whom Manchin might appoint, three names are making the rounds, but only one seems to make sense:

* Gaston Caperton: The 70-year-old Democrat served as governor from 1989 to 1997. On the surface, he'd be a logical pick, since at his age, he might see an abbreviated stint in the Senate as a nice career-capper. But he's been away from the state for some time and now lives in New York. (He's the president of the College Board.) He's also a divisive figure in state Democratic politics. A former insurance executive, he inherited a budget disaster in 1989 and oversaw steep tax increases (the sales tax went from 5 to 6 percent and was extended to include food) and spending cuts. An ugly teacher strike took place. At one point, Caperton's popularity fell to just 13 percent. Amazingly, he succeeded in winning re-election in 1992, but only after surviving a rough, three-way Democratic primary with just 43 percent of the vote. Even in the general election (when he comfortably beat the Republican nominee), Caperton faced significant defections from the left, with Charlotte Pritt (the liberal who finished second to Caperton in the primary) receiving six percent of the vote through write-ins.

* Bob Wise: Another former governor, Wise served from 2001 to 2005 -- the only West Virginia governor in the modern era to decline to seek a second term. The reason: Manchin, then the secretary of state, gave him a shove after Wise admitted to having an extramarital affair. After the story broke, Manchin announced that he'd challenge Wise in the 2004 primary and quickly raised more than $1 million. It's hard to believe Manchin would reach out to him for this.

* Nick Casey: The outgoing state Democratic chairman is being touted by several Washington journalists, and for good reason. As a non-politician, he (probably) wouldn't be after the spotlight and he wouldn't bring much baggage to the job. Plus, as a Marshall University political science professor told Newsweek, he's gotten plenty of friends in both wings of the state's Democratic Party.

Of course, there could be a wild card in play. Manchin has ruled out appointing himself, but rumors have periodically erupted that he might tab his wife for the seat. That would probably be a reckless move, given Manchin's desire to run for the seat himself. But who knows?

Update: Tennant held her press conference (though we had trouble viewing it through her site) and confirmed that there will be no special election this year. Manchin will appoint a new senator, who will hold the seat (at least) through the November 2012 election, when Byrd's term is due to expire. You can read her complete rationale here.