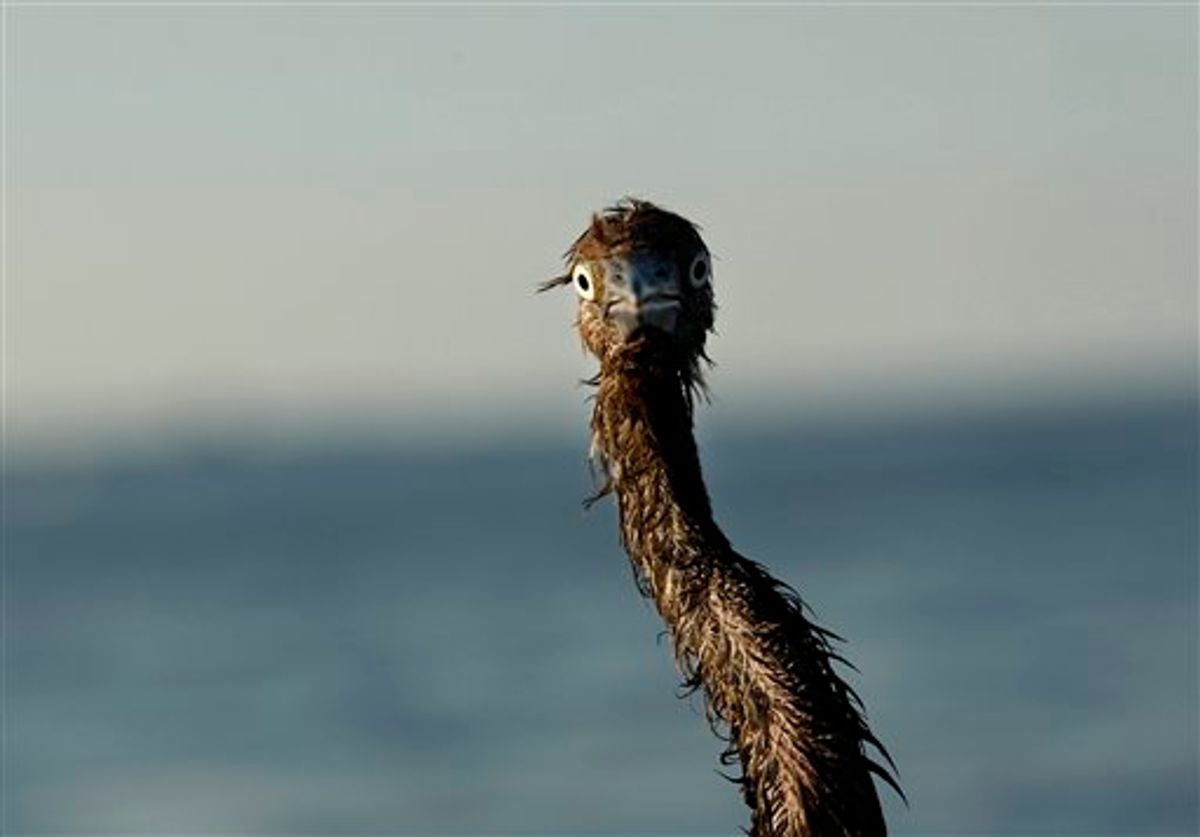 A heavily-oiled bird is seen after being rescued from the waters of Barataria Bay, which are laden with oil from the Deepwater Horizon spill, in Plaquemines Parish, La., Saturday, June 26, 2010. (AP Photo/Gerald Herbert) (AP)
--

BP denied its embattled chief executive was resigning as the first tropical storm to hit the Gulf of Mexico this year threatened to disrupt cleanup work on its massive oil spill, even from a distance.

It quoted Deputy Prime Minister Igor Sechin, who was set to meet with Hayward on Monday, as saying that Hayward would introduce his successor.

"Hayward is leaving his post, he will introduce his successor," Sechin was quoted as saying by RIA Novosti.

BP spokeswoman Carolyn Copland in London said the report "is definitely not correct."

Hayward was to assure Russian officials of BP's viability and discuss issues related to Russian joint venture TNK-BP, which accounts for about a quarter of BP's reserves and production.

In the Gulf, Tropical Storm Alex was forecast to strengthen and possibly become a hurricane Monday or Tuesday as its center crossed open water from Yucatan to Mexico's northeastern coast.

That track is far from the area of the oil spill off Louisiana's coast. But the first tropical storm of what is expected to be an active Atlantic hurricane season will still generate waves up to 15 feet high and winds of 20 to 30 mph on its outer edges that could pound the oil spill area, said Stacy Stewart, senior hurricane specialist at the National Hurricane Center in Miami.

"That could exacerbate the problem there in terms of pushing oil further inland and also perhaps hindering operations," Stewart said.

BP said the cost of its response to the Gulf of Mexico oil spill has reached about $2.65 billion.

BP says the figure does not include a $20 billion fund for Gulf damages it created this month.

Millions of gallons of oil have spilled since the Deepwater Horizon rig exploded 50 miles off the coast of Louisiana on April 20, killing 11 workers.

The Coast Guard admiral in charge of the spill response was headed back to the Gulf Coast a day after Mississippi's governor said he would press BP and the federal government for more help because oil started washing up on the shoreline of his state.

Adm. Thad Allen was expected to be in New Orleans on Monday and talk to the media about the latest on the spill. Allen has received some criticism from local officials who feel he might not be the right man to head the team. He has not responded to the criticism.

On Sunday, oil was found in at least two areas of Jackson County in Mississippi, and emergency management director Donald Langham said tar balls and a patch of oil were spotted at the St. Andrews beach and at the Lake Mars pier in Gulf Park Estates. The state had been mostly spared the oily mess from the a blown-out undersea well that has spewed anywhere between 69 million and 131 million gallons of crude into the Gulf of Mexico the past 10 weeks.

"While command and control of on-water resources has improved, it must get much better and the amount of resources to attack the oil offshore must be greatly increased," Mississippi Gov. Haley Barbour said in an e-mailed statement Sunday. BP said it would work with officials to get the necessary help in place.