The Abu Ghraib guard who thought he loved me

The notorious prison scarred him. His wife left him. But I did something no one else had: I listened 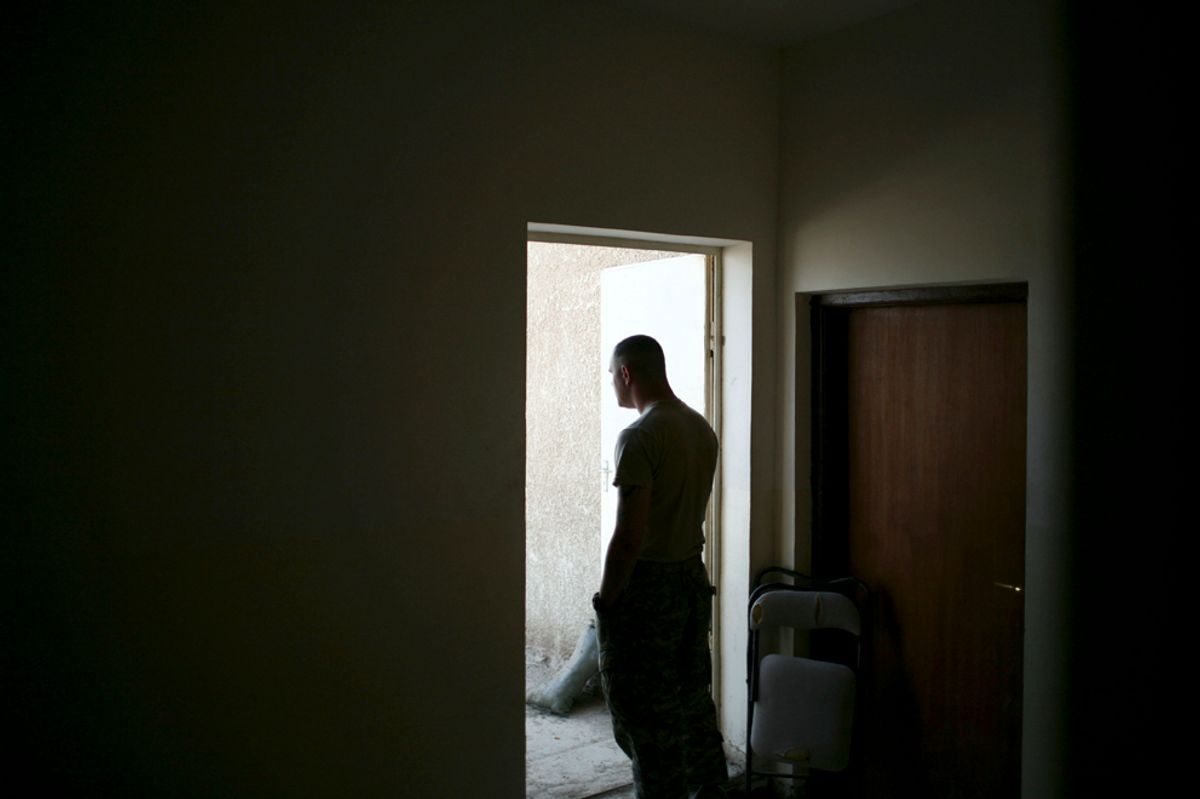 A U.S. soldier stands at the door of a police station, part of the GSS (General Security System), in the southeast of Baghdad, February 28, 2007. REUTERS/Carlos Barria (IRAQ) (Â© Carlos Barria / Reuters)
--

I didn't recognize the phone number, but I knew the area code, 301: Cumberland, Md., aka Torturetown, USA. The area had gained notoriety as the home to many of the soldiers depicted in the infamous Abu Ghraib prison abuse photos. I had visited Cumberland numerous times over the previous two years researching a book I was writing about our torture program's effects on ordinary Americans. I had listened to people describe their deep level of betrayal by the military as well as those who said they wished we had done even more to the prisoners.

Looking through my list of contacts I figured out that the text was from a soldier -- let's call him Frankie -- a 34-year-old father of three. I had met Frankie at his home exactly one year prior. His small raised-ranch house was surrounded by similar ones, separated by narrow yards filled with lawn ornaments -- frog statues and mini-windmills. Inside, it was crammed with evidence of dedicated parenting -- cheerleading uniforms on hangers, children's toys piled up on the edges of the living room, and photos of beaming kids plastered on the fridge. We sat at his kitchen table, drinking water out of McDonald's souvenir glasses. The lights were mostly off, the television tuned in to the game with the sound off; his wife had taken his three young kids to the mall for the day so they wouldn't overhear what he had to say.

No longer in the National Guard, he had let his beer gut grow out but still kept his head closely shaved. Frankie was back working in a cafeteria where his father had before him. He considered applying the skills he'd learned as a Military Police officer at a position in one of the many local prisons, as had several other members of his unit. He said the night shifts would be too much, but one couldn't help wondering whether time at Abu Ghraib had been enough prison work for one lifetime.

Frankie was one of the guards assigned to take over the blocks at the hard site when the other soldiers were court-martialed. He was told there would be no photos of naked detainees stacked into pyramids but was trained how to short-shackle prisoners to bed frames, tie sandbags over their heads and keep them awake for days. In Frankie's view, they "were fairly decent to the prisoners, but obviously you have ill feelings toward them to start with."

It had been four years since he'd come home, but he said it was the first time he had really spoken about the prison. When he first came home, people asked him questions. When he was grabbing a beer at the local bar, people inevitably asked, "Oh, come on, you must have known the abuse was happening. Did you see the pictures? Did you get in on the action?

"I just kind of swept it under the rug or joked about it," Frankie told me. "You kind of push it away as best you can." But that didn't always work.

Frankie's stepfather told me that soldiers like Frankie needed to be left alone and treated like nothing had happened. His wife was "more or less supportive" and occasionally he told her stuff -- stuff he thought he probably shouldn't -- but only when he got "drunk and stupid."

"Honestly, she gets more upset that I was drinking than about what I told her," he said with a laugh, adding that he usually didn't even fully remember the conversations.

I had placed my tape recorder prominently between us on the kitchen table. It made it easier to listen intently without having to take notes. But it was also to remind him that this interview was on the record and part of my job.

He was understandably cagey when he told me about what happened in the prison. He ran through the list of abusive techniques he used on detainees, but haltingly. "I don't want to even be associated with it," he said. "There might be that shadow, like when a girl cries rape, and even if they prove the guy innocent, it is always there in the back of people's minds for the rest of his life."

It seemed even harder for him to explain what was happening inside his head. He told me he no longer constantly thought about Abu Ghraib the way he did when he first got back. He no longer jumped whenever a car backfired, but he was still on edge, still had nightmares and bouts of depression.

Compared to other soldiers whom I had spent weeks and months with, I barely knew Frankie. We only met twice, for perhaps a total of four hours, first at his home and later at the fluorescent-lighted cafeteria where he worked. Yet, those two conversations had provided him with something he hadn't been able to get anywhere else. I wished desperately that he'd had those conversations with his wife, instead.

When I started reporting the book, I never imagined that tough soldiers would tell me what happened in those prisons, let alone how it made them feel. But since then, soldiers have told me that it's easier for them to talk to someone like me than anyone else. Over Coca-Colas at a strip-mall Chili's, one soldier admitted for the first time that he had tried to kill himself in Iraq. Another confessed to having lashed an Abu Ghraib prisoner repeatedly over his third-degree burns. I heard their voices slow down and saw their eyes glaze slightly as they told me that they had come to realize ugly things about themselves. I learned how to listen for the things they weren't saying and how to offer them the space to fill in those gaps.

I wanted to know everything I could about these soldiers. I wanted to get inside their minds and understand the world from their perspective. I hung on their every word, relistened to the recorded conversations later, paying attention for places where I had failed to pick up a nuance or implication that needed more explanation, and coming back with more questions. It's unusual to have someone hang on your every word. For soldiers who are used to being brushed aside, it can be unheard of.

Friends can't understand what they are going through, and other soldiers will just call them pussies. They fear that V.A. psychiatrists, who pump them full of pills, are only concerned with getting them well enough to be sent back to the war zone. Some of the wives have even told me that they would rather not know the stories that their husbands have told me. Telling family members, especially wives, means tarnishing yourself in the eyes of someone you have to face every morning at breakfast.

I made a conscientious effort not to send any mixed messages to the soldiers. I bought a new wardrobe of baggy clothing, asked after their wives, kept things professional -- and placed that tape recorder out in plain sight. But I learned that it's not a low neckline that's seductive -- it's someone's desire to listen.

I feel a certain sense of responsibility for taking on these soldiers' stories. I know the risks of reliving those experiences, especially for veterans suffering from post-traumatic stress disorder. I have learned how easy it can be for subjects to misinterpret that strange and unique intimacy, one of detachment and utter bonding, which is unlike any other relationship. In some ways we were complete strangers, but in others, I knew them better than anyone else.

It's impossible to spend so much time with someone without establishing some kind of friendship. I worry about crossing the line between journalist and friend. Journalists are criticized for interviewing subjects, siphoning off their experiences and emotions for a story, and then dropping them. But doing the opposite can mean entering confusing territory. When a soldier drunk-dialed me and told me he had given up all hope of fixing his life and was just going to redeploy, was it unethical when I tried to discourage him? When a soldier tells you he is suicidal, can you urge him to see a therapist? When another texts you telling you he has left his wife, how do you respond?

Over that past year, Frankie had sent me texts wishing me a happy New Year, merry Christmas -- messages I had assumed were just text blasts. Other times he casually asked me about the status of the book. I thought little about the messages; my responses were short and polite. Just a week before, on June 20, he had written, "Let me know if u come back 2 cumberland 4 ur book. Would love 2 talk 2 u again."

That night of July 4, looking back at some of the texts, and remembering others, I saw how much I had misunderstood. I had been naive to think that that tape recorder could be a symbolic barrier between interviewer and subject. I had relied on that small electronic device to be a shield. But it was also an indicator that what he had to say was important, and that he mattered, something rare in a veteran's life.

The tragedy of this story is how desperate soldiers are for someone with whom they can share their experiences and their suffering. I had been so critical of the people in these soldiers' lives who weren't willing or able to listen to them. But when I received that text from Frankie, it was I who didn't want to respond or hear about his feelings. When it got truly personal, it turned out I was no better.

The next morning, I received a text apologizing. It was an accident, he said. I figured it was his attempt to save face. Wanting to quickly put it behind us and avoid embarrassing him, I wrote back saying that I understood -- people mistakenly send texts all the time.

Then, just like so many people do when they feel uncomfortable seeing a vulnerable side of a veteran, I said nothing. I tried to tell myself that having that tape recorder let me off the hook. But it didn't. Even when he texted a month later, I ignored his cry for help and never talked to him again.

Justine Sharrock is the author of "Tortured: When Good Soldiers Do Bad Things" (Wiley, 2010). Her article "Am I a Torturer?" was part of a Mother Jones series nominated for a 2008 National Magazine Award. Her work has also appeared in Alternet, the Utne Reader, San Francisco magazine and the San Francisco Chronicle.

Justine Sharrock is the author of "Tortured: When Good Soldiers Do Bad Things" (Wiley, 2010). Her article "Am I a Torturer?" was part of a Mother Jones series nominated for a 2008 National Magazine Award. Her work has also appeared in Alternet, the Utne Reader, San Francisco magazine and the San Francisco Chronicle.