How Harry Reid can save bank reform 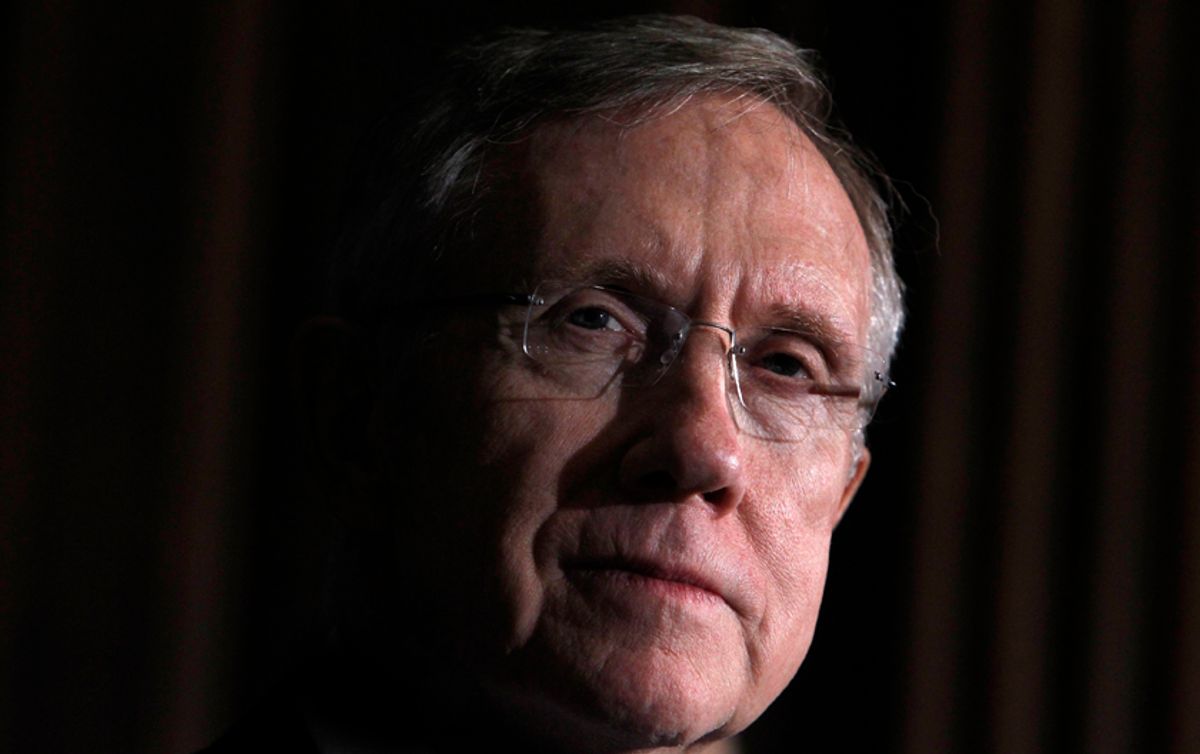 (UPDATE: The analysis in this post has been overtaken by breaking news. Look for a new post shortly.)

Bloomberg, the Wall Street Journal, the New York Times, every publication is running almost exactly the same story: Bank reform, suddenly, is in trouble again, as the tiny handful of Republican senators who previously voted for the bill are now reportedly having second thoughts.

A trio of New England Republicans, Massachusetts' Scott Brown and Maine's Olympia Snowe and Susan Collins, are all citing the last-minute inclusion of an $18 billion bank levy during the conference committee reconciliation of the House and Senate bank reform bills as the catalyst for their discontent. That puts Senate Majority Leader Harry Reid in a bind. The conference committee process could be restarted all over again, but the current conference report can't be amended. Even if he waits until a fresh Democratic body replaces the vote of Robert Byrd, he still needs three Republican votes to get to the magic 60. (And even if both the Democrats who voted against the bill, Maria Cantwell and Russ Feingold, decided to change their minds, he'd still need one Republican vote.)

(UPDATE: Scott Brown is now definitely a "no.")

Tim Fernholz, who has been doing terrific ongoing coverage of the whole process of bank reform for the American Prospect, tweets that it is "too early to panic." Give Harry Reid some time to work, he recommends. At FireDogLake, David Dayen suggests that the New Englanders are just holding out for concessions down the line -- they haven't actually committed to voting "no."

But the entire charade is absurd, and Collins and Snowe, who try to pass themselves off as sensible Republicans, ought to be ashamed of themselves. Preventing a financial meltdown isn't a freebie. The "Orderly Liquidation Authority" -- the process by which financial institutions whose failure could cause systemic risk are shut down -- has a price. The Congressional Budget Office estimated that price at around $21 billion over the next couple of decades. The bank levy is designed to raise the funds to pay for those estimated costs in advance.

Of course, it's possible that we won't have a financial meltdown in the near future, and the money won't be necessary. That would be great. But what you don't want is a situation where a Citigroup needs to be shut down, but you don't have the funds to pay for the liquidation. At that juncture, you can't raise money from Wall Street, because the banks are likely to be in dire straits. So you have no choice but to bust the federal budget again.

During the Bush administration, Republicans made a habit of passing legislation without finding the means to pay for the new costs they were saddling on the federal government. The Democrats reinstituted so-called pay-go rules, which means that Congress is now required to match new expenses with either new spending cuts or higher taxes.

Barney Frank is right to be annoyed. "What are we going to do, hold out a money basket?" he told the Wall Street Journal. Collins, Brown and Snowe are being obstructionist for patently self-serving reasons. This is a golden opportunity for a savage political counterattack. How ridiculous is this: The party that suddenly rediscovered the dangers of deficits as soon as it was out of power wants the federal government to assume new unfunded liabilities.

Harry Reid should call these jokers out, with gusto. And the White House could lend a hand.